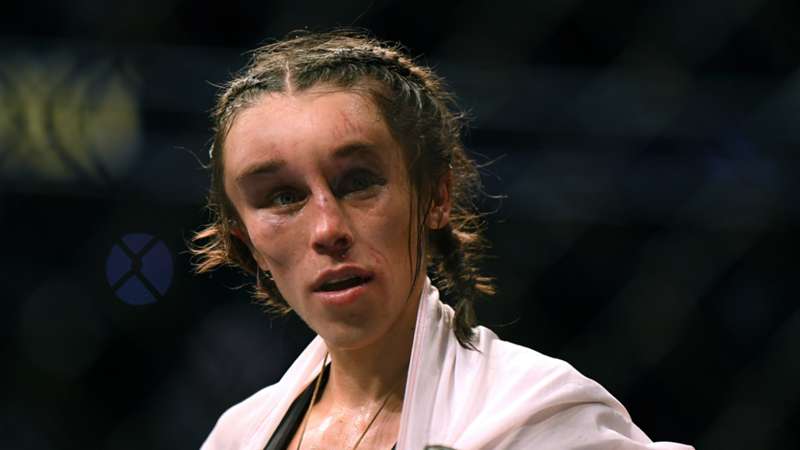 Jedrzejczyk appears to be OK after one of the greatest fights in women's MMA history.

In the co-main event of UFC 248, Zhang Weili and Joanna Jedrzejczyk put on the greatest women's fight of all time, with Zhang coming out on top with a narrow split-decision victory to retain the women's strawweight title.

When the dust settled, Jedrzejczyk had signifcant swelling on her forehead, as she had battled through a massive hematoma that developed in the early stages of the fight.

BEFORE ➡️ AFTER #UFC248 pic.twitter.com/AGMBh29f8M

After the fight, Jedrzejczyk was immediately rushed to the hospital to get checked out to see if there were any other injuries beyond what happened to her forehead. Early Sunday, ESPN reported that Jedrzejczyk was released from the hospital without any serious injuries.

Joanna Jędrzejczyk was just discharged from the hospital, according to her team. No significant injuries, they said. Here she is leaving moments ago. 📷 @gldlx pic.twitter.com/y58z4EjMx5

Jedrzejczyk (16-4) made no excuses in defeat and was proud of the back and forth battle that ensued with herself and Zhang. The former 115-pound champion felt the increased swelling starting from the halfway point of the fight until the final bell sounded, but it didn't deter her from going out there and leaving it all inside the Octagon in an attempt to regain her belt.

"You see my [swelling], I felt this, you know, she did great," Jedrzejczk said in her post-fight interview. "There was something missing, but I felt all the punches, from the third round the [swelling] was bothering me, and I felt it just getting more and more swollen, and my head was, like, going on and off.

"Thank you guys for coming and supporting me," Jedrzejczyk continued. "I will see you soon... It doesn't matter. I carry myself as a champ, with the belt or without, I was there. Very proud of her, congrats Weili."