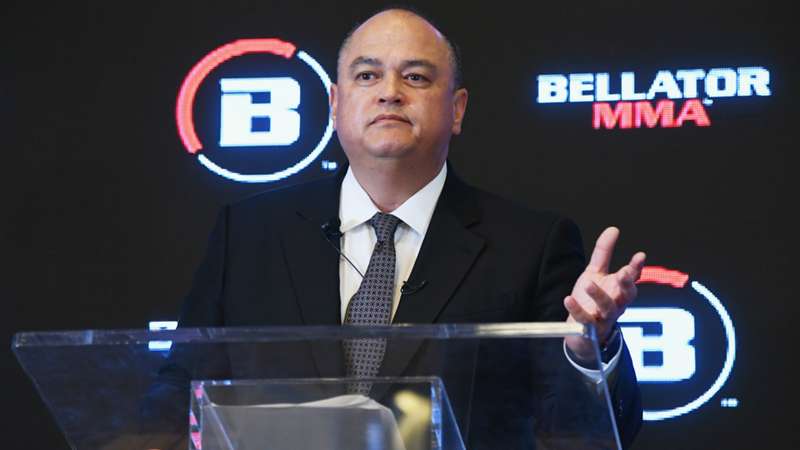 The Bellator MMA president goes in-depth on his decision to postpone Bellator 241, while still paying the fighters for the event.

A little more than two weeks ago, everything looked to be on the up and up for the sports world. The NBA and NHL were gearing up for the playoffs. Major League Baseball had spring training in full effect with Opening Day at the end of the month. March Madness was days away and significant boxing and mixed martial arts events were right around the corner.

But then disaster struck as the coronavirus swept into the United States, which has seen almost 65,000 confirmed cases and over 900 deaths. One by one, the NBA, MLB and the NHL suspended its seasons. The NCAA canceled March Madness. Bellator was scheduled to be the first significant MMA event on the docket with Bellator 241 on Friday, March 13, from the Mohegan Sun Arena in Uncasville, Conn.

The card was going to be held without fans due to a ruling by the governor of Connecticut, halting mass gatherings of more than 250 people. As time was rapidly approaching for the show to begin, Bellator president Scott Coker made the difficult decision to pull the plug on the event.

"To me, it all started with that press conference on Monday (in New York City to promote future events)," Coker told DAZN News. "And the virus, of course, was already a story. It wasn't at the point where it was shutting things down. Monday, we had a big press conference where all of our fighters were there to promote the next six (to) eight fights with events all over the world. Tuesday (we had the) great media tours. Wednesday, we had some great meetings. Thursday (the) weigh-ins happen, and the doctors were checking all the fighters (and) making sure they don't have fevers. Everybody makes weight. And then Friday, we're shutting things down."

For Coker, the tipping point was when President Donald Trump held a press conference hours before the show and declared a national emergency. The promoter of 34 years could see genuine concerns of staff members wanting to leave immediately and tend to their families. He knew the right thing needed to be done.

"It seemed like the virus started to affect some of our staff," Coker explained. "What I mean by that is, we had a meeting where I said, 'Look, if you guys are uncomfortable, you guys can go home.' Some of our staff was wanting to get home and get back with their families, and it started affecting the team. We didn't know what the President was going to say on Friday. People thought it was going to be a lockdown of domestic travel, and so people start freaking out about how am I going to get home?

"We have international fighters. It started becoming an uncomfortable situation all the way around. We shut it down at that point."

When Coker broke the news to the fighters that Bellator 241 was canceled, the natural reaction was they still wanted to compete. That's how they get paid for a living to provide for their families, as most fighters step inside the cage two to three times a year. The fear was that they had no idea of when their next opportunity to compete would come due to the uncertainty surrounding the virus. However, the idea of not paying his fighters never entered Coker's mind as they were fully compensated for their hard work in preparing for their bouts.

"To help them ease the pain of not fighting, we told them we're going to compensate them," Coker explained. "I think they felt really good about that because these fighters only fight two, three times a year. So, they make their money two, three times a year and that's it. If we didn't pay them, they probably wouldn't have fought for three months or four months before that. So, that means for eight months, they're not getting paid.

"But not just the fighters, but I'm talking the officials, the cutmen, the judges, referees, athletic commissions, the vendors, the event personnel ... we paid everybody out. 'Look, this is this way we want to handle it, and we'll make up the revenue at some point during the year.' That was how I looked at it. It was an easy decision because it was the right thing to do."

Coker feels you have to respect the fighters and treat them as human beings first before anything else. He doesn't regret the decision to suspend the show and pay everybody. The 57-year-old understands that ultimately money has to be made, but the show will go on. He knows at some point Bellator 241 will get rescheduled, and things will return to normal once the coronavirus subsides.

"I feel like this is something I'm responsible for," Coker said. "How would I want to be treated in a sense? Yes, there is a bottom-line number that we have to generate. It is a business. There's a profit/loss at the end of the year. To me, this is revenue that we'll be able to make up at some point. I feel good about saying that.

"If someone were to get sick, infected, something should happen, I would not be able to live with myself because I made the call," he continued. "Numbers are numbers, but this is a people business. Business is about people. This is something that I've always believed in. That's how I run my fight companies over all the years.

"To cancel that ... this is the first one ever for me in the fight business. It was the right call to make."