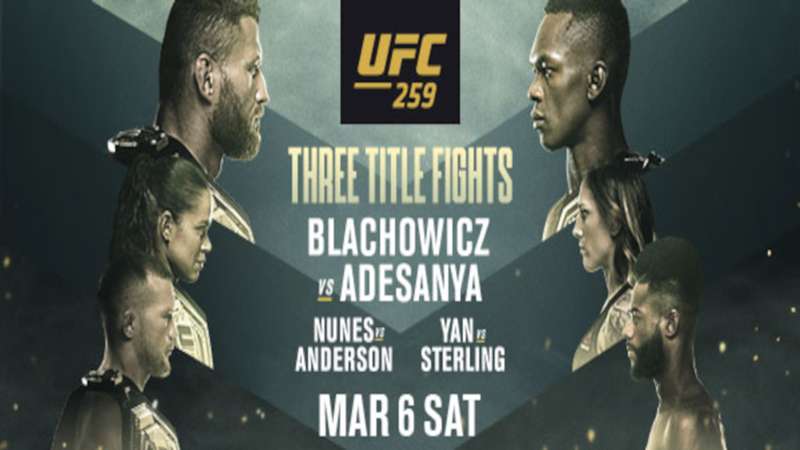 Middleweight champion Israel Adesanya looks to become the fifth "champ champ" when he moves up to challenge light heavyweight titlist Jan Blachowicz in the main event of UFC 259.

The most loaded UFC event of 2021 is upon us as UFC 259 takes place from the UFC Apex in Las Vegas.

Blachowicz's (27-8) won eight of his last nine and four consecutive fights, capped off by plowing through Dominick Reyes via second-round TKO at UFC 253 to capture UFC gold for the first time.

Adesanya (20-0) last fought on the same show as Blachowicz when he thrashed Paulo Costa via second-round TKO. Afterward, "The Last Style Bender" said he'd give Jared Cannonier the next title shot if he got by former titlist Robert Whittaker at last Saturday's UFC 254. But that didn't come to pass as Whittaker won a unanimous decision.

Nunes (20-4) is regarded as the greatest female fighter of all time and one of the greatest men or women to compete. "The Lioness" is on one of the sport's all-time fantastic runs, winning 11 consecutive fights with six coming via stoppage — including running through Ronda Rousey, Miesha Tate, Holly Holm, and Cris Cyborg in the first round. She's starting to run out of challengers at 135 and 145 pounds.

UFC 259 has a little bit of everything for everybody. It has the makings of a memorable show.

Here is everything you need to know about UFC 259: Jan Blachowicz vs. Israel Adesanya.

UFC 259: Jan Blachowicz vs. Israel Adesanya takes place on Saturday with the early prelims kicking the event off at 5:15 p.m. ET, before the pay-per-view main card begins at 10 p.m. ET. Blachowicz and Adesanya enter the Octagon at around 12:30 a.m. ET, depending on the length of the undercard bouts.

In the United States, the PPV price for UFC 259 for current ESPN+ subscribers is $69.99. New subscribers have the option of bundling an annual ESPN+ subscription and the fight for $89.98. The first half of the preliminary card can be seen on ESPN+ at 5:15 p.m. ET before switching over to ESPN at 8 p.m. ET.

The card will be held at the UFC Apex in Las Vegas. The UFC has held their recent U.S. events at the Apex with no audience due to current COVID-19 protocols. Blachowicz and Adesanya have never competed at the facility.