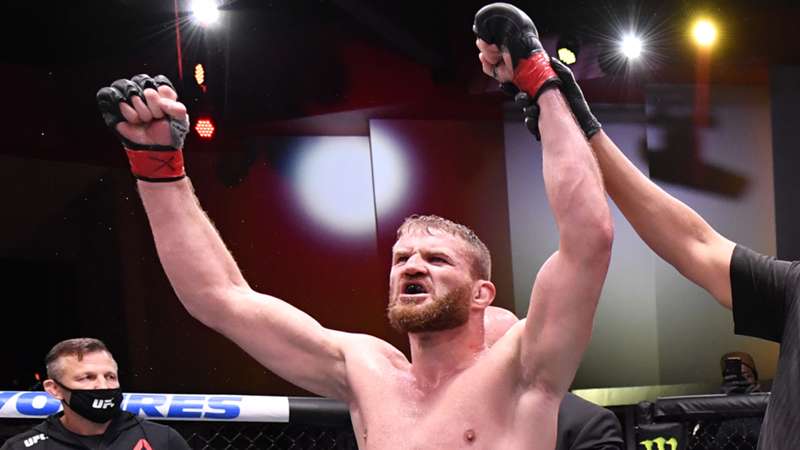 Blachowicz denied Adesanya's quest to become the latest UFC double champion and "Polish Power" did it with his grappling.

Israel Adesanya was daring to be great, attempting to become the UFC's latest double champion.

Well, Jan Błachowicz made sure that didn't happen. Błachowicz used his grappling and scored two late takedowns to secure a unanimous decision victory over Adesanya to retain his light heavyweight title Saturday night. Judges at the UFC Apex in Las Vegas scored it 49-46, 49-45 and 49-45 all in favor of Błachowicz. DAZN News had it closer, as a 48-47 fight for Blachowicz.

"Polish Power" handed "The Last Stylebender" his first MMA loss by turning up his grappling in the fourth and fifth rounds. Each of those rounds had Błachowicz notching a big takedown and weighing down on Adesanya, who couldn't wriggle free.

And with the victory, Blachowicz believes respect should be heaped onto his name as well.

Blachowicz certainly does deserve respect. Adesanya came out looking all too comfortable in the first round, keeping a healthy distance and tagging Blachowicz with some early shots. The next two rounds were a lot closer and could've gone either way. However, Blachowicz made sure the fourth and fifth rounds — and subsequently, the bout — belonged to him, and he did it with his grappling.

Blachowicz secured a takedown with three minutes left in the fourth round and kept Adesanya on the mat until the frame ended. At about the halfway mark of the fifth and final round, Blachowicz took Adesanya down again — this time additionally scoring with elbows and punches.

🇵🇱 @JanBlachowicz puts himself in position to secure the final round. #UFC259 pic.twitter.com/k5Q7CjdHad

The late wrestling was enough to have Blachowicz' hand raised as he expressed his desire to face Glover Teixeira next.

"It didn't go the way I wanted it to go, but dare to be great," Adesanya said. "The critics are the ones on the sidelines, but I'm the one putting it on the line."

facebook twitter whatsapp
A unanimous decision goes Blachowicz' way, as judges have it 49-46, 49-45 and 49-45, as "Polish Power" retains his title and hands Adesanya his first MMA loss.

Blachowicz vs. Adesanya; Round 5

Blachowicz vs. Adesanya; Round 4

Blachowicz vs. Adesanya; Round 3

Blachowicz tries digging in a couple of body punches, then adds a kick to the body as well. Blachowicz touches Adesanya with a left hook. He takes the back of Adesanya, who gets back on his feet and stings Blachowicz with a solid shot. That punch seemed to hurt the champ or at least make him think over his strategy a bit. Blachowicz grabs Adesanya in a standup clinch against the cage. That should momentarily stop Adesanya's movement and striking, as Blachowicz has him wrapped up. Adesanya is making Blachowicz miss while flicking out his own jab that lands. Adesanya's leg kicks showing damage on Blachowicz' lead leg. Nice jab from Blachowicz. Left hook from Blachowicz now. Blachowicz grabs Adesanya in a body lock and has him pressed up against the cage. (10-9 Adesanya, 29-28 Adesanya)

Blachowicz vs. Adesanya; Round 2

Adesanya fires a kick to the body. Blachowicz touches Adesanya with a right hand. Right-hand lands for Adesanya. But Blachowicz fires back with a solid shot and kick behind it to make sure "The Last Stylebender" feels his "Polish Power." Blachowicz is respecting all of Adesanya's feints. Blachowicz gets Adesanya in a clinch, but Adesanya wriggles out of it quickly. Adesanya with a stinging inside leg kick. And another. Blachowicz brushes Adesanya back with a right hand. Adesanya fires a kick that lands right on the cup. Blachowicz takes a moment and is ready to resume action once again. Blachowicz goes from the clinch to throwing a flurry of punches. He needs more of that kind of offense. More leg kicks from Adesanya, who is tallying up strikes. More volume from Adesanya. More significant strikes from Blachowicz. (10-9 Blachowicz, 19-19)

Blachowicz vs. Adesanya; Round 1

facebook twitter whatsapp
Adesanya fires off with a leg kick to check Blachowicz' temperature. Both fighters are trying to feel each other out. Blachowicz already looking for an opening to close the distance. Adesanya launches a head kick, which Blachowicz defends. Both fighters lobbying to assert position and spacing. Adesanya goes for another head kick, but Blachowicz defends again. Blachowicz with a head kick now that Adesanya defends. Adesanya goes for an overhand right seconds later. A body kick lands for Adesanya, who is doing a good job keeping space and fighting on the outside. A leg kick lands for Adesanya. Will Blachowicz try to get in a clinch next round? (10-9 Adesanya)

UFC 259: Blachowicz vs. Adesanya is moments away!

facebook twitter whatsapp
It's about to be that time, as Adesanya has made his way into the Octagon. The champ's entrance is seconds away.

Nunes makes Anderson eat a punch in the opening seconds. Big overhand right from Nunes wobbles the challenger, and she takes Anderson down. Nunes is pounding her with hammer fists now. This could be over real soon. Nunes is going for a submission. She grabs hold of Anderson's arm and now cinches in an armbar. Anderson taps. It's a wrap.

All it took was 2:03 into the first round. Nunes is the GOAT for a reason. Nunes says, "It's not my fault," referring to the quick finish. A humble double champ.

facebook twitter whatsapp
Amanda Nunes putting the featherweight title on the line against Megan Anderson is moments away.

An intentional foul (the illegal knee) disqualifies Yan and Sterling is named the new bantamweight champion. This is clearly not how Sterling wanted to be crowned champ, as he tosses the title to the ground and sheds tears in the Octagon. At the time of the disqualification, two judges had Yan winning 29-28; the other had Sterling up by a point.

"To f—ing have the fight called like that ..." an emotional Sterling tells Joe Rogan following the anticlimactic win. "That's not the way I wanted to win. That's not how I envisioned this."

Yan isn't having to put much effort into taking Sterling down, as he secures yet another takedown. Yan stands above Sterling and allows the challenger to get back up. Yan defends a takedown and tags Sterling with a left and right. A kick to the body seems to make Sterling grimace. Jumping knee from the champ moments later. Yan lands a left. Sterling is winded. Knee lands from the champ and a punch behind it. Overhand left brushes Sterling back seconds later.

Oh! Illegal knee from Yan drops Sterling. Yan launched the knee when he had Sterling down on one knee, pushing the challenger's head down. A 100 percent illegal knee, as Sterling's right knee was down when Yan blasted him with that knee. Sterling falls down, trying to get back up. The ref calls in a doctor to check on Sterling, who's laid out on his back. It's over, as it appears that Yan will be disqualified. Let's wait for the official word.

facebook twitter whatsapp
Both fighters exchange punches to the face. Yan launches a left and is looking to land something with worse intentions. Yan is defending Sterling's punches very well and takes down the challenger again. Sterling is up and Yan tags him with a left. Yan grazes Sterling with a kick off the clinch. Sterling seems to be fatiguing. (10-9 Yan, 29-28 Yan)

facebook twitter whatsapp
Sterling already on his back, with Yan looking down on the challenger. They're back up on their feet. Sterling is moving too quickly and fumbled a single-leg takedown just now. Yan, with his back against the cage, is putting his weight on him. Sterling is working on trying to get a takedown, but Yan is standing firm with his back against the Octagon. The champ sneaks in a strong knee. Sterling must be careful. Uppercut and right hand from Yan as well. Sterling tries to mount some offense on the feet with a kick to the body, a couple of jabs and a spinning backfist, but Yan defends all pretty well and takes the challenger down about 10 seconds before the bell. (10-9 Sterling, 19-19)

facebook twitter whatsapp
Sterling showing early pressure with side kicks and jabs. Sterling flicking the jab and sticks in a knee, backing the champ up. An assortment of offense from Sterling, who's showing a crazy pace early on. High knee from Sterling wobbles Yan. That hurt the champ, who takes cover. Yan drops Sterling with a thud with a solid right hand. Sterling shakes it off and gets back up, but clearly felt the champ's power there. Yan takes Sterling down moments later. The early offense from Sterling changed courtesy of Yan's power for the champ to take the round. (10-9 Yan)

facebook twitter whatsapp
The first of three title bouts on the evening. Sterling has made his way into the Octagon and here comes the champion.

After being overwhelmed on the ground for two full rounds, Dober taps to an arm triangle at 1:37 into the third round. Makhachev cinched it in tight, taking the air out of Dober and forcing the submission.

🇷🇺 @MakhachevMMA displayed why he has top five potential.

Makhachev's takedowns were clinical, especially the inside-out trip he used to notch one in the second round and the bear hug he used to secure a takedown in the third. Makhachev says he's ready for anyone next. But is anyone ready for him? He's the real deal, especially with Khabib Nurmagomedov by his side.

Makhachev with another takedown

Dober has got to be exhausted, dealing with this kind of grappling force and pressure. He needs to strike as quickly as possible in the standup come round three because one more takedown, and it's over.

facebook twitter whatsapp
It takes all but a minute for Makhachev to take Dober down. Let's see how Dober responds. He's feeling the pressure from Makhachev's elite grappling already. Makhachev is all over Dober on the ground. Serious, next level grappling, which almost delivered an armbar submission late in the first round.

Islam Makhachev vs. Drew Dober is up next

facebook twitter whatsapp
What's going to give when the stellar striking of Dober goes up against the all-around skills of Islam Makhachev in this lightweight matchup?

Judges have it 29-28, 29-28 and 30-27, all in favor of Aleksandar Rakić. Though Rakić gets the win, he nor Santos took enough risks — if any at all. They showed each other a bit too much respect over three rounds. A two-way street of hesitation in the Octagon there. Rakić kept his distance with some stinging leg kicks but never capitalized even when he did damage with the attacks.