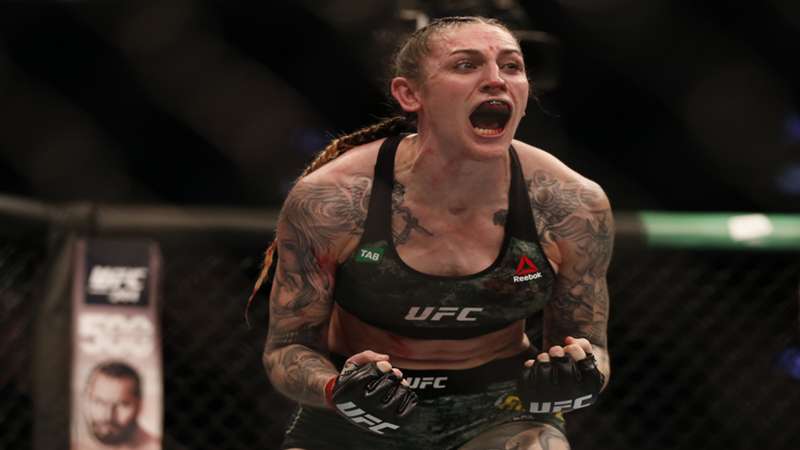 The old Megan Anderson is back.

After losing her first professional fight in November 2013, Megan Anderson went on a tear by winning eight of her next nine contests, with six of those wins coming via stoppage. Along the way, Anderson won the Invicta FC women's featherweight title.

That run punched her ticket to the UFC in 2017. Expectations were high for the Australian. Pundits had dubbed Anderson as the one who could beat Cris Cyborg when she was on her reign of terror. Her debut was set to be against Cyborg for the vacant women's featherweight title at UFC 214. Anderson ended up pulling out due to personal issues.

One year later, Anderson finally made her Octagon debut at UFC 225 against Holly Holm. She looked flat and lost to the former bantamweight titlist by unanimous decision. Anderson rebounded to beat former bantamweight title challenger Cat Zingano at UFC 232. Things looked back on track, but Anderson was lackluster in losing by first-round submission to Felicia Spencer in May 2019.

Anderson (11-4) found what made her a force to be reckoned with and now has won back-to-back-fights via submission to earn a crack at dual champion Amanda Nunes for the featherweight title in the co-main event of Saturday's UFC 259.

So what flipped the switch back to what made Anderson great to begin with?

"Honestly, I think what it was is I learned to love myself again," Anderson told DAZN News. "I was in a lot of very bad, toxic relationships and environments. I got away from that. I love to give myself grace and to accept myself, my quirks and my weirdness, my goofiness, and be proud of who I am as a person and I think that was the biggest takeaway from 2020 was that I found my confidence again in who I was as a person.

"It really wasn't until the end of 2019 is when I got rid of a lot of toxic people from my life, got out of toxic environments, and started to really make changes. Since making those changes, it was the best decision I ever made."

Initially, Nunes-Anderson was set for UFC 256 in December. But about four weeks before the fight, Nunes pulled out with an undisclosed injury. Anderson had already gone through an almost four-month training at the time of the postponement. Then she kept waiting and waiting for a new date. Eventually, the fight was rebooked, but it didn't come without some frustration from the challenger.

"I would say after Amanda pulled out, it was about two months before we got a new date," Anderson said. "I knew the fight was going to happen. It was just a bit frustrating having to wait. I didn't understand why it was taking so long for her to set a new date. That was a little frustrating. But eventually, we got there."

Nunes (20-4) is on an all-time great run, winning 11 consecutive fights over the likes of Ronda Rousey, Miesha Tate, Cyborg, and Holm. But in her last two victories over Spencer and Germaine de Randamie, respectively, Nunes went the distance in both of those tilts. Nunes was getting outstruck in the de Randamie fight and had to use her ground attack to secure the victory and retain her bantamweight title.

Anderson is a huge underdog heading into UFC 259. She respects everything "The Lioness" brings to the table, but Anderson knows there are chinks in Nunes' armor that can be exploited and give her a path to UFC gold.

"I think Germaine had some successes in that fight," Anderson admits. "It showed some areas where Amanda might not necessarily have been as strong, which I'm sure she'll she'll fix those. But I'm a very different fighter than Germaine."