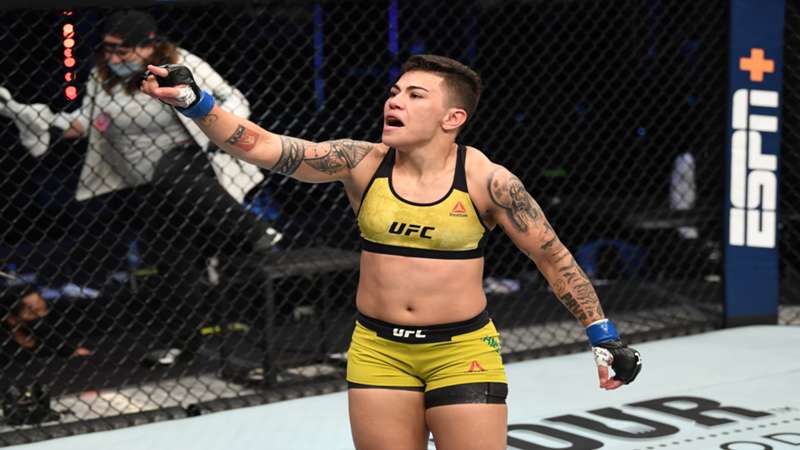 Jessica Andrade was pretty confident what would be next for her if she'd won flyweight debut.

Something had to give for Jessica Andrade when she lost to former strawweight champion Rose Namajunas — who will challenge Zhang Weili at Saturday's UFC 261 — at UFC 251 in July. It was the second consecutive defeat for the Brazilian, as she had lost the belt to Weili in 42 seconds in August 2019.

Losing a third consecutive contest is doom in the UFC. Instead of putting her job at risk, Andrade made the trek up to 125 pounds where the weight class isn't as stacked, and the path to winning a second belt was there for the taking. So Andrade went up 10 pounds and faced top-ranked Katlyn Chookagian in October. Andrade bulldozed the former 125-pound title challenger and won via first-round TKO.

After such an impressive debut, a title shot seemed to be within Andrade's grasp. While the UFC didn't make their intentions clear in the aftermath, Andrade took a couple of days off and started preparing for the queen of the flyweight division, Valentina Shevchenko. Her strategy proved to be the correct route as she'll battle Shevchenko for the 125-pound title at UFC 261.

"I actually think that the biggest surprise was the fact that I had to face Kaitlyn Chookagian because the UFC had another opponent lined up, and instead, I had to fight Kaitlyn, who was the leader of the rankings," Andrade told DAZN News through a translator. "So after I won and the way I won, I thought, 'Oh, I may get a shot at the belt.' I didn't want to get ahead of anyone. There are a lot of good athletes, but I knew that if the UFC offered it to me, I would say yes without a doubt. I wasn't sure, though because of the schedule, and I thought maybe they will give me another opponent so I can wait for that. The UFC chose me and wanted to wait for the fight. But deep down, I was already expecting the fight because right after the fight against Kaitlyn, I was already studying Valentina."

Andrade (21-8) began her UFC career in July 2013, competing in the women's bantamweight division. She was known for having heavy hands, but that didn't translate well at 135 pounds, where she went 4-3. At the time, the UFC hadn't yet adopted the flyweight division, so Andrade dropped down to 115 pounds.

The move paid dividends right away when she stopped Jessica Penne via second-round TKO at UFC 199. From there, Andrade was guns blazing, as she won six of her seven, culminating in winning the strawweight belt with a vicious slam on Namajunas at UFC 237.

But having to cut an excessive amount of weight started taking its toll on Andrade before she even won the championship. She was making weight, but it was coming at a price. Even though her move to 125 pounds is quicker than she anticipated, Andrade no longer has to worry about a brutal weight cut and can now put her primary focus on improving her skills instead of shedding pounds.

"I feel really well fighting in the flyweight division," Andrade admits. "To think that I had general concerns about cutting away, and I had a lot of that concern cutting weight at strawweight. I was always very professional with the weight cut. I suffered a lot to make weight. Then the flyweight division was opening up, and now I feel like I did when I was fighting in the bantamweight division. I just need to worry about training and strategy, and now I don't have to worry about how I'm going to make weight."

During the build-up to UFC 261, Andrade has made her intentions clear that she's going to stop Shevchenko (20-3) and put an end to her dominance. It was quite the bold statement considering Shevchenko is 9-2 in the UFC, including winning six consecutive fights. Who were her two defeats to? Only perhaps the greatest women's fighter of all time, current dual champion Amanda Nunes.

The 29-year-old feels she has the right strategy to take the gold away from Shevchenko and become a two-division champion.

"I don't want the fight to go to a decision and to the judges because I don't want to take any chances," Andrade said. "I think to knock Valentina out, I need to come right out and decrease her velocity. I think when I do that, I will have a good chance to knock her out or win by submission. The strategy is to have not to make room for her to fight and not give her any space."