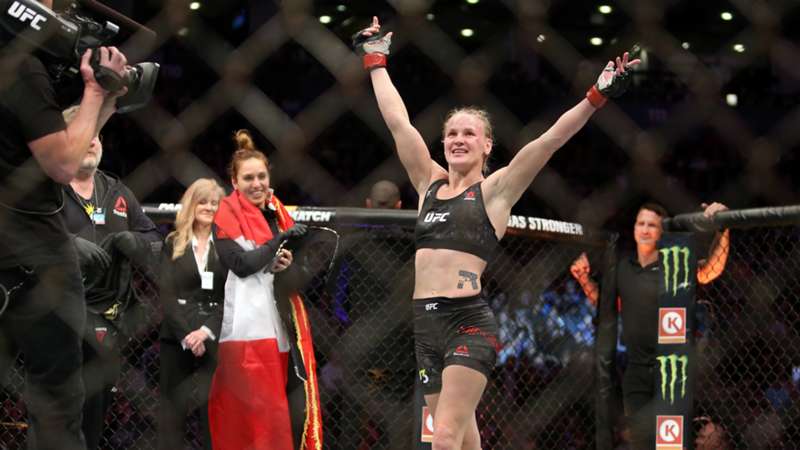 Nunes plowed through Megan Anderson in a little over two minutes to retain the 145-pound belt at UFC 259 and extend her remarkable winning streak to 12. Shevchenko and Weili get the opportunity to extend their winning streaks at Saturday's UFC 261 from the VyStar Veterans Memorial Arena in Jacksonville, Fla., against Jessica Andrade and Rose Namajunas, respectively.

"My goal is to defend my belt in the flyweight division for a long time, to keep it for a long time," Shevchenko told DAZN News. "But in the same time, I'm open for any opportunities. I'm not going to be running like, ‘Oh, I need to fight this one.’ No. I’m going to stay here. If they want to fight me, Weili, Amanda, whoever, I'm here. I’m open. But I made them running for me and not me running for them."

The multi-time Muay Thai world champion owns the 125-pound division. Since dropping down to flyweight in February 2018, Shevchenko has made it look easy by going 6-0 with three stoppages, and the "Bullet" was in control start to finish in the other three bouts that went the distance. So when Shevchenko had a little bit of trouble in the early going of her last fight at UFC 255 against Jennifer Maia, people freaked out because she showed perhaps a glimpse of vulnerability.

While others were concerned for a brief, Shevchenko wants everyone to relax as she feels it was just a blip that occurs during a potential 25-minute contest.

"First of all, I was very happy that the fight went five rounds because I was coming (back) from an injury and surgery," Shevchenko said. "I wondered how good and strong my leg would be. Is everything fine? Is everything good? Jennifer, I can tell she's a strong fighter. Comparing her a few years ago to where she is right now, it's completely different fighters. I would definitely say she grew up a lot. There was just one situation when I was trying to wrestle to put her down, and she stayed on top. This is the only situation, and people kept saying what it was. I think it was definitely nothing. It's (the fight) five rounds, just a little episode. It's nothing."

Expectations are high for Shevchenko heading into UFC 261. Fans want to see a highlight-reel performance so she can move on to a superfight. The great fighters are always able to block out the noise and live up to the hype. The ones that don't get to that level are unable to carry that weight of the world on their shoulders and buckle under the pressure. Shevchenko feels like she thrives when the lights shine the brightest because she puts the sole focus on her opponent and nothing else.

"They expect me to go and kill everybody," Shevchenko said bluntly. "It is good in that way because they believe in me, and I really appreciate it. That's why I'm training hard every day and hard to keep to follow all of their expectations. I really want to be the person they want to see.

"I'm focusing on my opponent. I'm focusing on my fight. I'm focusing on my training camp, my preparation. I never like focusing on the opinions. Before the flight, I never focus on the behind the scenes, what are the betting odds, or what everyone is saying on social media. For me, it's nothing important. The only one thing that’s important is my return. I didn't ever think to be the champion to stay as a champion to continue holding my belt. This is for me. It's number one. That’s really one of the only things that's really important."