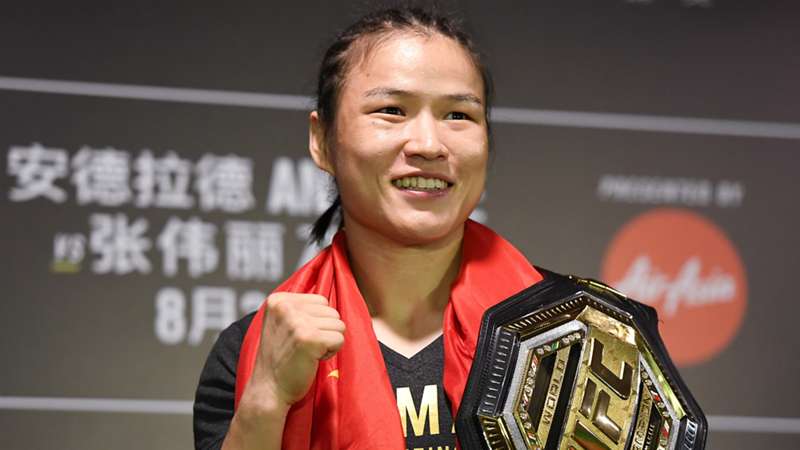 The women's strawweight champion had a trip to remember after her last fight.

It was quite the journey for Zhang Weili heading into her first defense of the women's strawweight title against Joanna Jędrzejczyk at UFC 248 in March 2020. Weili left her native China and ended up heading to Bangkok, Thailand, and a pit stop in Abu Dhabi before finally arriving in Las Vegas a week later for her fight.

Despite the tough road to get to UFC 248, it didn't affect the first Chinese UFC champion as she won a bloody and gruesome battle against Jedrzejczyk in arguably the 2020 "Fight of the Year" to successfully defend the belt for the first time. The struggle to make it back home was just as arduous as the war inside the Octagon, according to Weili, because of COVID-19, which had just started to run rampant across the world that made it extremely difficult to travel.

"Last time because of the pandemic, it took me more than a month before I could finally fly back to China," Weili told DAZN News through a translator. "So when I landed in China, I had quarantine for two weeks in the hotel. When I finally came home, I saw a lot of people wearing the shirt 'Welcome Back'.

"I didn't like the fact that the journey back home would be that difficult because when I was flying during those day, there was a lot of stuff going on, Weili said. "But it was an experience of a lifetime. I didn't treat it as a joke or a laughing matter. The whole experience taught me that everything can be solved if you have patience. It made me mentally more stronger."

A little over one year later, Weili returns to the United States to face former 115-pound champion Rose Namajunas at Saturday's UFC 261 from the VyStar Veterans Memorial Arena in Jacksonville, Fla. The journey to UFC 261 wasn't as bad for Weili this time around. It took Weili two days to get from China to Tallahassee and then drive to Jacksonville.

One of the key storylines heading into UFC 261 is that if Weili and women's flyweight champion Valentina Shevchenko emerge victoriously, then a bout could occur between the two champions. UFC president Dana White loves the idea, and Shevchenko told DAZN News that she's "open" for business. Weili hears the noise but isn't interested in such talk.

"Right now, I'm just focused on the fight on Saturday, Weili said bluntly. "I'm not thinking about Valentina or anything like that. I'm focused on Rose."