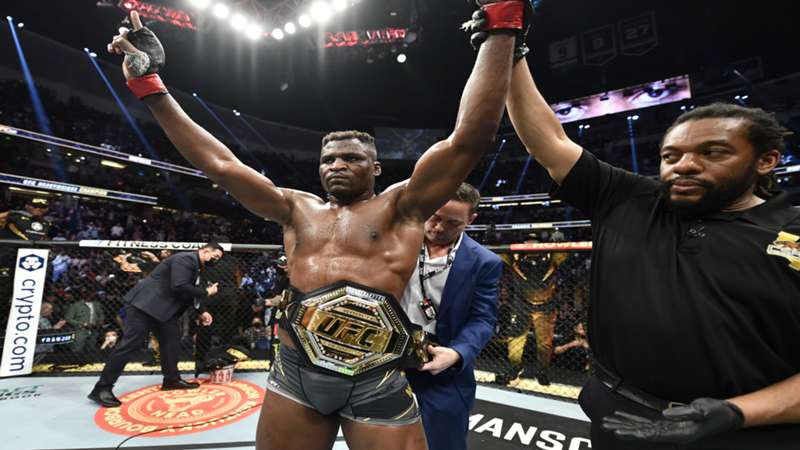 It wasn't the way most expected, but Francis Ngannou remains the champion.

Francis Ngannou was the betting underdog heading into his title unfication bout with Ciryl Gane at UFC 270.

He entered the fight in a contract dispute with the UFC and has been publicly feuding with company president Dana White. After two rounds, Ngannou was either down both or it was even.

However, instead of swinging for the fences and relying on his Mike Tyson-like power, Ngannou went uncoventional and used his grappling to score a series of takedowns and his jiu-jitsu in the final three rounds to win via unanimous decision (49-46, 48-47, 48-47) to unify the heavyweight titles from the Honda Center in Anaheim, Calif. DAZN News scored the fight 49-46 for Ngannou.

What made the victory all the more impressive was that Ngannou did it while injured as he later revealed in the Octagon.

"It's been a very tough training camp," Ngannou told Joe Rogan during his post-fight interview. "Very tough 10 months. A lot of s—t. Three weeks ago, I hurt my knee. Tore my MCL completely, hurt my ACL and other stuff."

Gane (10-1) controlled the opening round with his precision striking and avoided Ngannou's heavy hands for the most part. During the second round, Ngannou landed a little more but Gane was connecting on kicks to the knees of Ngannou.

Realizing he could be down on the scorecards, Ngannou (17-3) listened to his corner from Xtreme Couture and did the unthinkable. He used his never been seen grappling. Gane attempted a kick and Ngannou caught and picked the Frenchman up, bodyslamming him to the ground. Ngannou transitioned to Gane's back. A moment later, Gane tried for a trip but Ngannou judo tossed him to the mat. Near the end of the round, Ngannou grabbed a double leg takedown and held onto to the bell.

It was much of the same in the fourth round when Ngannou rushed in, landed a body shot and took Gane down. He tried the same thing in the fifth round. This time, Gane secured a takedown of his own. Somehow, someway, Ngannou slipped out and got the fight in full guard. Surprisingly, Gane went for a leg lock, but Ngannou stayed patient and slipped out and got on top to control the remainder of the round and retain the heavyweight title.

Now, what is next for Ngannou? He's been hinting at a boxing match, preferably with WBC heavyweight champion Tyson Fury.

UFC 270 was the final fight on Ngannou’s contract. With the win, the UFC can invoke a champion’s clause that will extend Ngannou's contract for three fights or for one year. If Ngannou decides to not compete, his contract would end in January 2023, so he could enter free agency if he waited out the deal.

Here is what happened at UFC 270.
0
NEW BLOG POSTS

facebook twitter whatsapp
Gane starts with a couple of lefts and then a leg kick. Front kick from Gane and Ngannou lands a right to the body. Stiff left from Gane to back Ngannou. up. Gane now gets a takedown of his own. Ngannou is trying to find a way out. Somehow, someway, Ngannou slips and in full guard. Gane is trying for heel hook. Gane doesn't let go and gets a kneebar. Ngannou gets up and is in mount.

Ngannou is in side control. Two short lefts for Ngannou. Another left for Ngannou. One more left to close it out. Ngannou looks like he won while Gane looks dejected. (10-9 Ngannou, 49-46 Ngannou)

facebook twitter whatsapp
Gane taps two leg kicks to really no effect. Hard body shot from Ngannou. Stiff jab from Gane. Leg kick from Ngannou. An exchange of kicks. Body kick from Gane. But Ngannou grabs Gane and barrels him to the cage and then powers him back down to the mat.

Ngannou has Gane's back. Sharp left through Gane's guard. Gane gets back up. But Ngannou overpowers Gane to the mat.  Ngannou now in full guard. Good wrestling and jiu-jitsu from Ngannou. Hard knee to the chest from Ngannou. Ngannou gets on top of Gane and lands a couple of lefts and rights. Gane needs a finish to win going into the final round. (10-9 Ngannou, 39-37 Ngannou)

facebook twitter whatsapp
Push kick to begin the round for Ngannou. Gane attacking the knee with a series of kicks. Hard left by Gane to stun Ngannou. Leg kick by Gane and a right barely clips Gane. Spinning wheel kick by Gane. Body kick from Ngannou. Uppercut from Ngannou to the body. Needs more of those. Not the most eventful round but that's the way Gane wants it. (10-9 Gane, 19-19)

Interesting that Ngannou is wearing knee pads on both knees. Something looks off with Ngannou. Doesn't have the usual pep in his step.

They are circling each other and Gane rushes in for a takedown. Ngannou stuffs it and lands a hard knee. It's Ngannou rushing and pressing Gane against the cage, which is surprising. An elbow lands for Gane. Ngannou misses a wild left. A body shot and left upstairs for Ngannou. He's staying on top of Gane. A short left hook lands by Ngannou. Spinning back kick lands for Gane.

Ngannou rushing Gane back into the cage and lands a knee. Gane reverses, lands a short knee of his own. Edge to the champion. (10-9 Ngannou)

The time for talking is over. Here we go.

What a phenomenal fight. It could have gone either way. Such a hard one to score. Figueiredo and Moreno had their moments as it was a very close fight. Moreno was the more active fighter while Figueiredo connected landed the harder shots.

THE GOD OF WAR RECAPTURES THE BELT 🏆

facebook twitter whatsapp
They are battling for the takedown and it's Moreno who secures a takedown when he really needed it. A beautiful job by Figueiredo in quickly getting back to his feet. Body shot from Moreno. Left hook square on Figueiredo's chin. Moreno goes back to the stinging left jab.

Right hand drops Moreno. But Moreno pops up and blasts two left hands of his own. Two flush rights from Figueiredo. But Moreno connects on two lefts of his own to hurt Figueiredo. They slug it out to the bell. I don't want to be these judges. (10-9 Moreno, 48-47 Moreno)

facebook twitter whatsapp
Figueiredo begins the fourth with a thudding leg kick. Stinging left jab from the Brazilian. Two leg kicks that affect Moreno. Right hand from Moreno. Another brutalizing leg kick by Figueiredo. Body kick by Moreno. Left hand out of the clinch from Moreno. Three lefts by Moreno. Left hook connects for Moreno. He's stolen back the momentum in this round.

A wild exchange which Moreno got the better of. It's going to come down to the fifth and final round for the flyweight championship. (10-9 Moreno, 38-38)

facebook twitter whatsapp
Moreno rushes in for a knee. FIgueiredo grabs him in a bearhug for a takedown. Again, he can't hold him there as Moreno pops back up. A left drops Moreno, but flips behind regain his bearings. Moreno stings Figueiredo one more time. Figueiredo can't handle Moreno's power. A flick of the leg to the calf drops Moreno. Moreno is relentless as another left sends Figueiredo, who smiles, back to the cage.

Stick and move by Moreno. Another left sends Figueiredo back. Heavy lefts from both guys. A calf kick by Moreno. A high kick from the champion proceeded by a front kick up the middle. A right hand drops Moreno. Figueiredo goes for the choke but the bell sounds as he pushes Moreno after the bell.

facebook twitter whatsapp
Moreno begins the second more aggressive with a couple of lefts and a kick. A short left out of the clinch for Moreno. He's gaining confidence with each passing second. Battle of leg kicks. Moreno can't keep taking many of those. Moreno drops Figueiredo with a right. Immediately, he pounces but after a scramble, we are again back standing.

Moreno starting to attack the legs. A little cut on the bridge of the nose of Figueiredo. A left from Moreno and the former champion fires back with a body shot. A left wobbles Figueiredo. (10-9 Moreno, 19-19)

facebook twitter whatsapp
A pro-Moreno crowd as they are going bananas for him. An early clash of heads, which thankfully has no effect on either guy. Figueiredo tries hardest for a takedown but Moreno stands his ground and is able to power out of it to shove the challenger back. A sneaky high kick lands for Figueiredo.

Moreno is off balance but still stuns Figueiredo but he doesn't follow up. Figueiredo slides around, gets Moreno back and takes him down. It doesn't last long as the champion spins out and we are back on the feet.

Beautiful spinning leg kick from Moreno. A left hand a push kick to end the round for Figueiredo. (10-9 Figueiredo)

facebook twitter whatsapp
It's time for the co-main event of UFC 270, as Brandon Moreno (19-5-2) defends the flyweight title against No. 1-ranked Deiveson Figueiredo (20-2-1).

This is the third time Moreno and Figueiredo have met. They went to a majority draw at UFC 255. Then at UFC 263, Moreno dominated from start to finish to become the first Mexican-born fighter to win a UFC belt.

Will that make a difference in how the fight plays out? We are about to find out.

After losing the opening round, it was all Pereira. He did a bit of everything. The Brazilian threw jumping knees, cartwheel kicks, spinning back fists, superman punches and most importantly, he closed the distance and landed the crisper shots to get the decision win to run his winning streak to four.

facebook twitter whatsapp
For the first time on the main card, we make it to the second round, and we are at the third fight.

High octane Michel Pereira is back

Said Nurmagomedov lives up to the hype with quick submission win

It didn't long. Stamann was getting dominated on the feet. So he got Nurmagomedov against the cage to attempt a takedown. Nurmagomedov kept his balance, rolled Stamann over and quickly snatched in the guillotine choke. Instantly, Stamann tapped out. What a performance from Nurmagomedov.

Third quickest submission in UFC bantamweight history for the native of Dagestan. We have a new player in the 135-pound division.

Where have we heard that before? 🤔 #UFC270 pic.twitter.com/byAcivYre7

The UFC 270 headliners have arrived

Both heavyweights are focused and ready for the #UFC270 main event 👀 pic.twitter.com/rKOjgK9l3T

Giles rushed in and Morales lands first with a straight right hand to send Giles reeling to the mat. Morales jumped right on top of Giles and unloaded a barrage of shots to his dome. Giles wasn't defending himself and referee Mike Beltran had seen enough and waved it off.

Couldn't ask for a better UFC debut for Morales, who runs his record to 13-0. Well done.