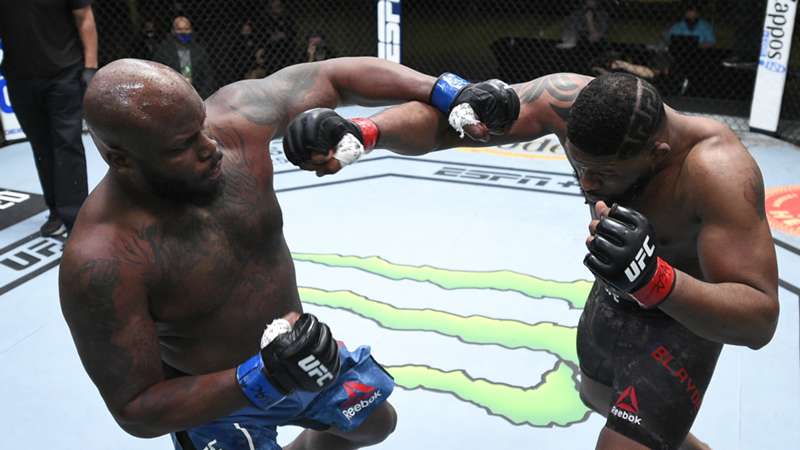 Derrick Lewis is the UFC's all-time heavyweight knockout leader for a reason, and you can add another scintillating KO to his highlight reel.

"The Black Beast" detonated a massive right uppercut to knock Curtis Blaydes out cold for a second-round KO in the main event of UFC Fight Night on Saturday, live from the UFC Apex in Las Vegas.

After dropping Blaydes with a thud, Lewis rained down on him with two pulverizing rights, but Blaydes' lights were already out by that point, as Lewis collected his 20th knockout in devastating fashion.

"That was the only punch I was waiting for the whole fight," Lewis said of the uppercut during his post-fight interview after being outworked by a busier Blaydes in the first round.

With the victory, Lewis can look forward to a possible title shot soon. However, he knows he'll have to wait for champion Stipe Miocic and Francis Ngannou to fight on March 27 and for Jon Jones to face that winner before he can even think ahead to his own opportunity.

"I heard Jon Jones is coming up (to heavyweight to face the Miocic-Ngannou 2 winner), so makes no sense for me to say I'm going to fight for the title," Lewis continued. "We'll just see. Ain't no telling."

UFC president Dana White already tabbed Jones to face the winner of Miocic-Ngannou 2. Lewis still added that if he has a choice on who to face for the title, it'd be Miocic.

"I like them wrestlers," Lewis said after dispatching Blaydes, who prides himself in his wrestling skills with blunt force.

Blaydes touted his wrestling experience edge over Lewis entering the fight but didn't use it in the first round, opting to stay on the feet, instead. Still, Blaydes stifled Lewis with constant movement and pressed the action enough to take the opening round.

Blaydes went for a takedown during the second, but Lewis defended it well before sending Blaydes into an unforgiving orbit with his raw power for yet another memorable finish.

facebook twitter whatsapp
Now, Blaydes goes for the takedown and has the underhook on Lewis' leg. Lewis defends well and wriggles out. They're in the center of the Octagon again, with each heavyweight looking for an opening for damage. WHOA! Derrick Lewis detonates a massive right uppercut that shuts off Blaydes' lights. He rains down with two massive hammerfists, but Blaydes is already knocked out cold. Unreal power from Lewis! He's the UFC's all-time heavyweight KO leader for a reason! Wow.

Blaydes and Lewis touch gloves and start to feel each other out. Lewis hits Blaydes with a big right, driving him back a bit. Blaydes is now well aware of Lewis' power.

Blaydes now with a couple of right crosses that land. He sticks in a left hand now, too, for good measure. Both fighters try for short leg kicks. Blaydes hasn't gone for a takedown yet. Blaydes lands a huge right. Lewis returns fire a few moments later.

Blaydes is doing a nice job keeping Lewis guessing with his constant movement. Blaydes with a counterpunch and then kicks at Lewis' legs. Another couple of left jabs land for Blaydes and now a knee as well. Lewis covers up a bit. Swelling on the left leg of Lewis. Eye poke briefly halts the action with just a few seconds left in the round. Herb Dean warns both to watch their fingers. The fighters have one more exchange before the round ends. (10-9 Blaydes)

Blaydes vs. Lewis main event is up next!

You know what time it is.

The heavyweight clash we've been waiting for 💥@RazorBlaydes265 vs @TheBeast_UFC happens now!

[ #UFCVegas19 is LIVE on #ESPNPlus ] pic.twitter.com/JOm5pNCHDi

Francis Ngannou, who faces Stipe Miocic for the heavyweight title March 27, is excited:

All three judges have it 29-28 for Kunitskaya. Although she gave up control, Kunitskaya had 178 total strikes to Vieira's 16. Kunitskaya's hellish elbows during the waning seconds definitely helped sway the judges, as the vicious striking opened up a gash and hematoma on Vieira's forehead. Having control wasn't nearly enough for Vieira, as Kunitskaya gets her fourth victory in her last five fights.

Kunitskaya opens the third frame with leg kicks before being driven into the canvas by Vieira, who gets another takedown. Vieira is working diligently for the mount. She's got it. Kunitskaya works to half guard. Now, Vieira takes Kunitskaya's back. Kunitskaya is fighting off rear-naked choke attempts by blasting the Brazilian in the face with hard shots. Kunitskaya is now on the top, raining down with ferocious elbows that are landing with blunt force. Kunitskaya's strike numbers go up, but Vieira owned the control time edge. Let's see how judges have it. (10-9 Vieira, 29-28 Vieira)

Vieira is working from the bottom and looking for something to lock-in. She goes for a triangle and then an armbar to no avail. Kunitskaya is unleashing vicious knees and elbows on Vieira, who's on her knees. Vieira gave up way too much control time this round and was way too comfortable working from the bottom. Anyone's fight entering the third and final round. (10-9 Kunitskaya, 19-19)

facebook twitter whatsapp
Kunitskaya just got a rough taste of what Vieira is capable of, as she spent the final 90 seconds of the opening round on the bottom with Vieira in the mount and in full control after her second takedown. (10-9 Vieira)

Co-main event is next

Ketlen Vieira and Yana Kunitskaya in our co-main event is next, before the main eventers take the Octagon:

Focused.@RazorBlaydes265 and @TheBeast_UFC are looking to keep their win-streak going at #UFCVegas19. pic.twitter.com/oUCzfdha3E

Vieira believes a second-round knockout is in the cards for her tonight, while Kunitskaya thinks she can get the job done in the first. Bold predictions.

facebook twitter whatsapp
Judges have it 30-26, 30-27 and 29-27 all in favor of Minner, who dominated Rosa on the feet with striking and on the ground. An absolute clinic.

Minner drops Rosa with a thud

After a nonstop pace during the first round, Minner launches a huge right hand and drops Rosa with a thud. He gets the mount and is looking for something to lock in here in the second round. Minner is dominating.

Rosa went for an armbar twice during the waning seconds of the round and came close to securing it. The third and final round is next. As long as Minner is mindful of possible submission attempts, he should win comfortably.

Charles Rosa and Darrick Minner are about to get to it

Daukaus throws out a light left and smashes a hard right on Oleinik's temple. Sensing he has the veteran hurt, Daukaus is pummeling him against the cage. Only a matter of time now. Herb Dean steps in, and just like that, Daukaus has yet another victory.

Hawes takes majority decision but not without scare

Imavov made it very interesting during the final 90 seconds, as he nearly finished Hawes with a hard right. But Hawes, on wobbly legs, went back to grabbing Imavov and two judges had it 29-28 in his favor, while one had it 28-28. Still, enough to have his hand raised. Hawes' thorough control due to his wrestling helped him get the win here.

Imavov gives Hawes something to think about in second

Imavov dazes Hawes with some swift punches, but Hawes takes him down and regains control here in the second round. That's after Hawes used his wrestling to control the first round pretty thoroughly. The third round is next.

facebook twitter whatsapp
Hawes is coming off a dynamic 18-second KO of Jacob Malkoun back in October. Can he make another statement tonight?

Aspinall cinches in RNC and it's over!

facebook twitter whatsapp
Aspinall speared Arlovski hard against the cage, then swiftly locked in a rear naked choke to get the second-round submission. Impressive.

Making a name for himself! 🗣

The ref had to take a closer look while Aspinall was detonating this hellish striking, but he let the bout continue.

Andrei Arlovski vs. Tom Aspinall kick off the main card

facebook twitter whatsapp
Let's see how this heavyweight tilt pans out. This marks Arlovski's 34th UFC appearance, which is third most all-time for appearances in the company's Octagon.