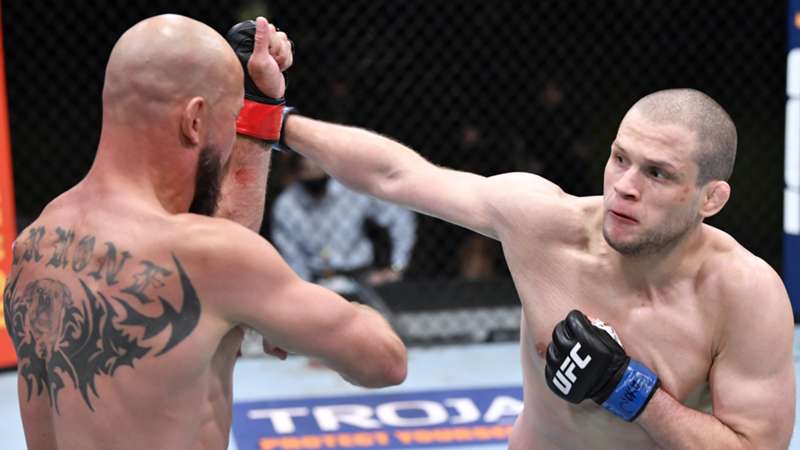 One of the UFC's most tenured and respected veterans was dealt with handily in Las Vegas.

Alex Morono stepped in at short notice but got the job done nonetheless, finishing Donald 'Cowboy' Cerrone in four minutes and 40 seconds in the co-headline bout of UFC Fight Night on Saturday.

The first-round TKO came when the New Mexico fighter lived up to his pre-fight vow to go straight onto the front foot, closing Cerrone down relentlessly before his finishing barrage was enough to force the referee's intervention.

Diego Sanchez was the originally-scheduled opponent for Cerrone, until he was pulled from the fight and released from the UFC roster altogether due to medical concerns.

While Morono made the most of the last-minute opportunity, 'Cowboy' now finds himself at a serious crossroads.

Cerrone is tied for the most UFC appearances of all-time, along with Jim Miller at 37. Moving one clear with another UFC bout would be a fantastic achievement for one of the most popular non-champion fighters in recent memory, but after UFC fight number 38 it's difficult to see how much longer Cerrone can continue at this level.

The other main event of the evening saw Marina Rodriguez take a unanimous decision over Michelle Waterson (48-47, 49-46, 49-46), using her Muay Thai skills to execute a superb strike-based gameplan and take the win in the card's final bout of the evening.

Rodriguez arrived in Vegas on Thursday, two days later than everyone else competing on the card, due to struggles getting a visa in the U.S. from Brazil due to COVID-19. Her ordeal this week made victory even sweeter.

"There were so many challenges, but the big thing was just armoring my mind," Rodriguez said after the fight through a translator. "The whole team put our shields up. We knew it would be different and we couldn't be shaken by it."

Other results at UFC Vegas on May 8: