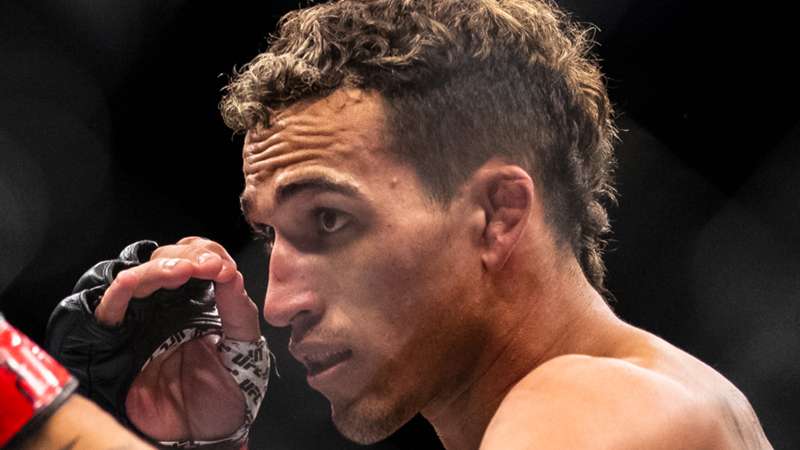 The Brazilian lightweight did give cooped-up fight fans something to cheer about from home.

It was a victory that would have generated an incredible amount of fanfare from a live audience. Too bad for Charles Oliveira, there weren't any fans inside of the Nilson Nelson Gymnasium in Brasília, Brazil to witness it.

With the venue empty due to coronavirus concerns, Oliveira scored a third-round submission of Kevin Lee at UFC Fight Night. The end came when Oliveira hit Lee with a front kick, only for the Detroit native to catch the Brazilian's left leg. That proved to be a mistake, as Oliveira instantly pulled Lee's head down into a guillotine choke, which "The Motown Phenom" tapped out to.

"Tony Ferguson and Khabib — you know, I’ll be sitting there first row (for your fight)," Oliveira said in the octagon following his victory. "There's no way to deny it. I'm one of the best in the world. The belt is going to be mine."

While it remains to be seen whether the Nurmagomedov-Ferguson title fight April 18 happens due to the COVID-19 outbreak, Oliveira did his part to seemingly enter the conversation. Despite the fact that he was fighting in front of an empty arena, Oliveira went about his business as usual and made sure that Lee's weekend only got progressively worse. Lee missed weight Friday and had to forfeit a percentage of his purse.

Then, Oliveira came out Saturday night and began to assert his rugged Brazilian jiu-jitsu, making Lee's life difficult over the first two rounds. Lee did seem to quell Oliveira's attack late in the second round and came out as the aggressor in the third, but Oliveira caught the American lacking and made him pay by cinching in that guillotine choke for the win.

The UFC Fight Night card went on without an audience to cap a week where other major sports leagues suspended or canceled its seasons due to COVID-19. Top Rank was slated to have a boxing card Saturday night, but postponed it due to the coronavirus as well.

Although no fans were present for his live performance, Oliveira did give cooped-up fight fans concerned about the coronavirus something to get excited for while watching from home.

It was the kind of finish that would have detonated a live crowd into a frenzy. But while there weren't any fans at the venue, plenty watching from home took notice to what Burns did Saturday night. He caught Maia with a picture-perfect left hook that dropped his fellow Brazilian with a thud. Burns threw his hands up in the air for just a second, believing that he got the instant knockout victory. When he quickly realized that it wasn't over just yet, Burns smothered Maia with hammer fists until the ref stopped the action right there for the scintillating win.

A CHANGING OF THE GUARD IN BRASILIA! 🇧🇷

That's definitely one way to deal with a submission specialist.

Moicano took Hadžović's back and immediately went for a rear-naked choke. That's when the Brazilian used a stiff right hand to the head and forced Hadžović's right arm out of the way.

The simple adjustment allowed Moicano to cinch in the RNC even tighter, as Hadžović had to tap out in the first finish of the UFC Brazil card Saturday night.

Walker couldn't bounce back into the win column mostly because he couldn't figure out Krylov on the ground. After the two traded fireworks in their standup game early on, Krylov began grappling the Brazilian. Although Walker did enough to take the second round, Krylov wisely took him back to the ground in the third and grappled his way toward a unanimous decision (30-27, 30-27, 29-28). While the scores were being announced in the empty venue, Walker just knew that Krylov won soundly.

Just like that, Walker has gone from a highlight-reel finisher and contender for Jon Jones' light heavyweight belt to a fighter who has suffered back-to-back losses and is trying to figure things out.

The hometown kid gets it done! 👏

There's something to be said about experience. Trinaldo used veteran savvy to control the fight on his feet and outstrike Makdessi. That and Makdessi's unwillingness to engage paved the way for the 41-year-old Trinaldo to get a unanimous decision win by the scores of 30-27, 30-27 and 29-28.