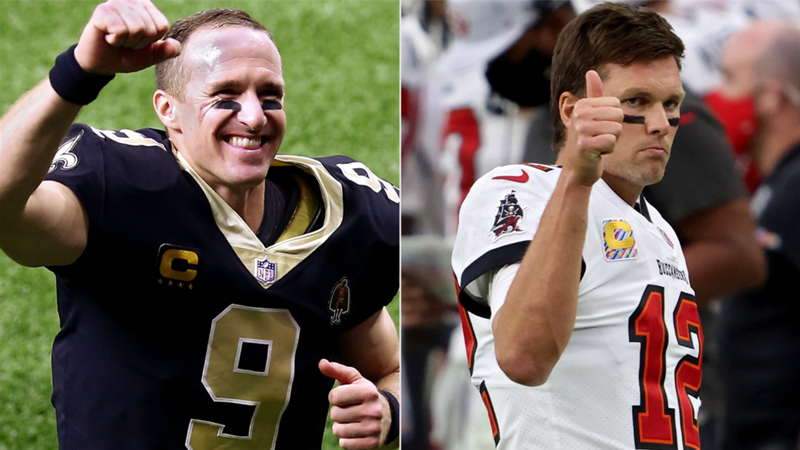 The Tampa Bay Buccaneers defense is the one who carries them to the NFC championship game.

The game between the Tampa Bay Buccaneers and New Orleans Saints was centered on the two of the greatest quarterbacks in Tom Brady and Drew Brees.

Instead, it was Tampa Bay's defense that stole the show. They forced four turnovers, including three interceptions of Drew Brees that led to 21 Buccaneers points to help them beat the Saints 30-20 and advance to the NFC championship game against the Green Bay Packers next Sunday in Green Bay.

Tom Brady didn't light up the stat line as he went 18-of-33 for 199 yards with three total touchdowns (two passing, one rushing), but he did enough to reach his 14th conference championship game, first with the Buccanneers. Leonard Fournette led the rushing attack with 17 carries for 63 yards, along with five receptions for 44 yards and a touchdown.

Before the game, Fox Sports reported that a loss in the playoffs would be the final game of Brees' career. For the game, Brees ended the season going 19-for-34 for 134 yards with one touchdown and three interceptions. Alvin Kamara had 18 carries for 85 yards, and Tre'Quan had three catches for 85 yards and two touchdowns.

After the game concluded, Brees hugged Brady, and they had a brief conversation. Brees left to wave and kiss the crowd inside the Superdome before exiting through the tunnel.

DAZN News provided live commentary throughout the game. Here's how it went down:

It is a final as the Tampa Bay Buccaneers beat the New Orleans Saints 30-20.

The Buccaneers will now face the top seed in the NFC, the Green Bay Packers next Sunday at Lambeau Field in the NFC championship game.

Another interception from Drew Brees

Drew Brees is trying to lead the Saints down the field. Brees throws a pass to Jared Cook. The pass is a little behind Cook, bounces off his bicep and is intercepted for the third time. It is the first time in his career that Brees has thrown three interceptions in a playoff game.

On second-and-goal from the one, Tom Brady sneaks it in for a touchdown. The extra point by Ryan Succop is good.

That is 21 points off of three Saints turnovers and 17 unanswered points by the Buccaneers.

The Saints are going to need a score in a hurry.

🐐 of the QB sneak.@TomBrady extends the Bucs lead, 30-20. #GoBucs #NFLPlayoffs

Drew Brees attempts a throw to Alvin Kamara and is intercepted by Devin Smith, who returns it to the Saints 20-yard line. That is the second interception of the game for Brees and third turnover for the Saints.

Can the Buccaneers deliver a potential knockout blow?

Ryan Succop kicks and makes a 36-yard field goal to give the Bucs the lead and the fifth time we have seen a lead change.

A good drive by the Bucs as it lasted over six minutes. Their defense got some much needed rest.

On third-and-5, Brady completes a 29-yard pass to Scotty Miller to the Saints 30-yard line.

Another huge throw by Brady and it was his longest one of the day. He's heating up at the right time.

Big third-down conversion by the Buccaneers

facebook twitter whatsapp
On third-and-15, Brady completes a spectacular 15-yard pass to Tyler Johnson. A big time throw by Brady after the penalty on the previous play.

Each team scored a touchdown in the quarter. It now comes down to the fourth quarter.

Which legendary QB is going to lead their team to victory?

The Bucs are heading towards the end zone led by running back Ronald Jones. On third-and-5 and needing a touchdown, Tom Brady zips a pass to Leonard Fournette, who storms into the end zone. The extra point from Ryan Succop is good and we have a tie game.

Two turnovers by the Saints has led to both Bucs touchdowns.

The Bucs cash in on the turnover and we have a tie game! pic.twitter.com/FevKk4cGiv

Drew Brees completes a slant pass to Jarrod Cook to get into Bucs territory. Cook is barreling and fumbles the ball after being stripped Antoine Winfield Jr. The ball is recovered by Devin White of the Buccaneers. They pick up the ball and are in Saints territory. What a turn of events. The Saints had the momentum and it has shifted once again.

Winfield forces it out and Devin White recovers for the Bucs!#GoBucs #NFLPlayoffs

The Saints are marching right down the field and in Buccaneers territory. Drew Brees steps back and floats a ball and is caught by Tre'Quan Smith for his second touchdown of the game.

A beautiful throw from Brees. The Saints run the ball for the bulk of the drive to setup the TD. Couldn't ask for a better start to begin the second half. Can the Buccaneers come right back?

Brees with a BEAUTY 💫

2️⃣ TDs for Tre'Quan in his first game back! #ForNOLA

If you were expecting a shootout, you'd be wrong. The defense and running games from both teams have been the key in the first half.

The Sanits have held Tom Brady to 10 of 21 for 93 yards and a touchdown. The Bucs have done a good job ob Drew Brees containing him to 10 of 17 for 63 yards and an interception.

Which quarterback is going to breakthrough in the second half? Brady started to get into a rhythm on the final drive of the first half while Brees is struggling.

The Saints get the ball to begin the second half.

Bucs field goal to end the first half

The Buccaneers engineer a good drive at the end of the first half, capped off by a successful 37-yard field goal from Ryan Succop (his second of the half) to close out the opening 30 minutes.

The Bucs did a good job of mixing up the run and pass game to keep the Saints on their toes.

facebook twitter whatsapp
It is the two-minute warning with the Saints up 13-10. The Saints and Buccaneers have become stagnant as each team punted in their last possessions. The Bucs are facing a third-and-7 when we come back.

The Saints insert Jameis Winston into the game for Drew Brees. Alvin Kamara is under center and a flea flicker gets back to Winston who lobs a pass to a wide open Tre'Quan Smith, who runs 56-yards for the Saints touchdown.

What a play call by head coach Sean Payton. How was Smith that open?

We have some action now. Both teams are heating it up.

The Bucs have the momentum as they have score ten unanswered points.

Tampa Bay gets an interception

Drew Brees drops back to pass looking for Michael Thomas and is intercepted by Sean Murphy-Bunting, who runs it back to the Saints three-yard line. A great play on the ball by Murphy Bunting. A golden opportunity for the Buccaneers.

facebook twitter whatsapp
Saints punt returner and wide receiver Deonte Harris is questionable to return with a neck injury. A potential huge loss for the Saints as Harris has been an integral part of the game.

Buccaneers get on the board

Ryan Succop comes for the field goal and converts from 26 yards to give the Buccaneers their first points  of the day. They were to settle for three when Brady threw an incomplete pass on third and two to Rob Gronkowski.

The defenses have been the stars of the game so far in keeping both offenses out of the end zone.

We're on the board 🙌 pic.twitter.com/fi0YSRn7GX

facebook twitter whatsapp
The Saints dominated the majority of the opening quarter due to their defense and special teams. But Brady and the Bucs are inching towards the red zone and looking to get on the scoreboard.