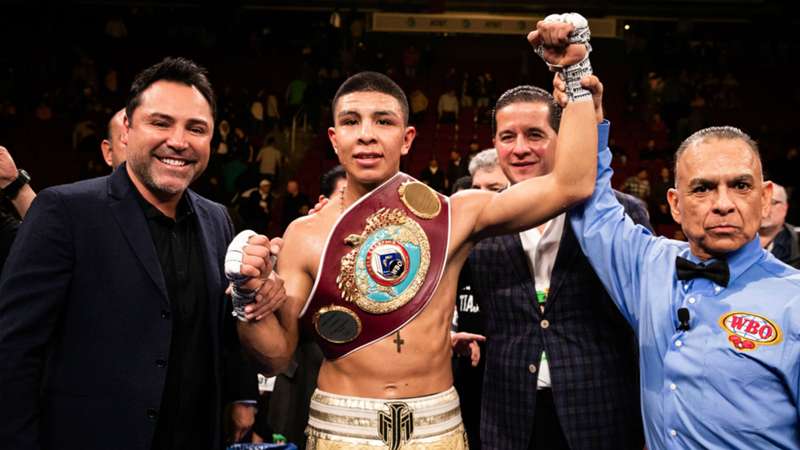 (Amanda Westcott/DAZN)
Watch Munguia vs. Ballard on DAZN (Except Mexico)

Ahead of his return to Tijuana, the Mexican fighter spoke about his quest for a world title at middleweight.

Jaime Munguia's motivation is at an all-time high ahead of his next fight against D'Mitrius Ballard on February 19th which is set to take place in Munguia's native Tijuana, Mexico live on DAZN (except in Mexico).

"I am very happy to return to Tijuana, the city that saw me grow up and has supported me throughout my career," the 25-year-old fighter said in a conference call with reporters.

"I have a great responsibility to my hometown after fighting away from home for a long time. I'm coming back a 154-pound world champion, I've become a figure in the boxing world, it's a big responsibility and I know it. I prepare every day to make my hometown proud."

However, this fight against Ballard is just a preamble to what Munguia and his promotional team are looking for in 2022. The Mexican knockout artist is looking to stay as active as possible and be ready in case a world championship opportunity arises.

"Since we started working with him, we have seen a great development in Jaime, not only as a fighter, but also as a person and I am sure he will be a better fighter at 160 pounds than he was at 154 (where he made five defences)," said his promoter Fernando Beltran.

With Gennady Golovkin's unification with Japan's Ryota Murata in limbo after the fight was cancelled at the end of the year due to travel restrictions, WBC belt holder Jermall Charlo awaiting an opponent and WBO champion Demetrius Andrade pondering a move up a division, Jaime said he would be willing to take on anyone, although his bias remains in favour of Kazakh champion Triple G.

"They were the ones who first sought us out, but we were always interested in GGG and we're still interested (if they want to fight too). If it were to happen it would be a great fight, a shock fight and the fight would be well accepted by the fans. We are determined to fight him," he said.

With his sights set on Ballard first, and with the promise of facing Dominican Carlos Adames - who is coming off an upset of Sergiy Derevyancheko - Munguia is set for an exciting 2022.