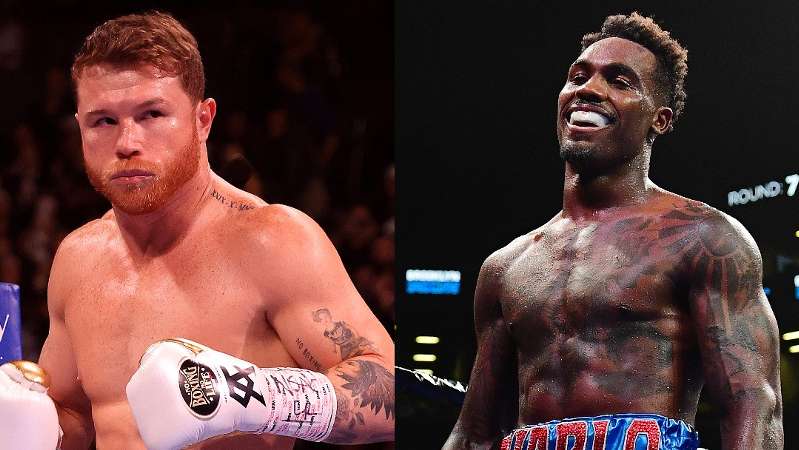 What the future holds for undisputed super middleweight champion Saul ‘Canelo’ Alvarez is still unknown, but a new leading candidate for his next opponent has emerged.

After fighting four times within 12 months and cleaning out the super middleweight division, Saul 'Canelo' Alvarez is enjoying a well-earned rest and is set to return on Cinco de Mayo weekend.

An opponent is yet to be announced, but there are an array of options including a return to light heavyweight and foray into the cruiserweight division. The WBC backed a fight between Canelo and their cruiserweight champion Ilunga Makabu at their convention last November.

However, according to boxing insider Mike Coppinger, a Makabu fight is off the table and now a clash with WBC middleweight champion Jermall Charlo is on the cards.

Jermall Charlo, not cruiserweight champ Ilunga Makabu, could be @Canelo ’s next opponent according to @MikeCoppinger . pic.twitter.com/Aj63yuZoTQ

While it certainly would have been interesting seeing Canelo venture into a weight division that he hasn’t fought at before, there was a feeling that the pound-for-pound king’s constant yoyoing between weight classes was at the risk of turning into a circus act.

Staying at super middleweight, meanwhile, makes much better sense when it comes to cementing a legacy.

Charlo is a name that has been touted by many fans for a possible clash with Canelo following his victory over Caleb Plant late last year. Boxing politics has kept the 31-year-old 160lbs champion out of possible unification fights with WBO champion Demetrius Andrade and WBA champion Gennadiy Golovkin. However, if a date with Canelo comes knocking, it’s an opportunity that cannot be turned down.

The fight will most likely be contested at 168lbs so the chance of becoming a two-weight world champion and undisputed at super middleweight would be hugely appealing to Charlo, and for once negotiating a deal shouldn’t be a huge problem.

Canelo is operating as a free agent therefore he is not tied to any particular promoter or broadcaster, while Charlo is aligned with Al Haymon’s Premier Boxing Champions. After staging his previous fight with former 168lb IBF champion Plant on PBC and Showtime PPV, there will be a clamour to have boxing’s biggest star once again on their platform come Cinco de Mayo weekend.

While a fight with Charlo would be welcomed by many boxing fans across the world, for some it won’t be the man they want Canelo to face.

Super middleweight contender David Benavidez has not been quiet when it comes to wanting a clash with the undisputed super middleweight champion. After losing his WBC title in 2019 due to a positive drugs test, the American has been on the road to redemption and is ready to win back the belt he previously held.

A fight between Canelo and Benavidez would generate a huge amount of interest, but with there being no news from the Canelo camp about wanting to take on Benavidez, it's likely the 25-year-old would have to work his way into a mandatory position.

Whenever Canelo’s future opponents are discussed, it’s not long before someone brings up a trilogy fight with Golovkin is brought into the conversation.

Trilogies are the preferred methods when it comes to settling some of boxing’s biggest grudges but would Canelo vs. Golovkin 3 live up to the hype. It would certainly generate huge numbers on whatever platform this fight would potentially land on, however with curtain slowly falling on Golovkin’s impressive career, this fight could be more one-sided than fans would like to believe.

Therefore, while a trilogy fight between these two greats would bring closure for boxing fans across the world, there’s a chance it could get very ugly for Golovkin against a Canelo at the peak of his powers.

Fighting at light heavyweight is a real possibility for Canelo. He has been a champion at 175lbs before after beating Sergey Kovalev in 2019 for the WBO title, but he has never fought at the weight since.

WBO champion Joe Smith Jr. or WBA title holder Dmitry Bivol would be the suitable options for Canelo. Artur Beterbiev, who currently holds the WBC and IBF world title belts, has also been mentioned, but the Russian is a wrecking machine and could very well inflict the second loss of Canelo’s career.

It's all well and good trying to point the Mexican pound-for-pound star in a certain direction, but it's Canelo who calls the shots and he will have the final say on his next opponent whether it be Charlo, Makabu or Golovkin. The 60-fight veteran has earned that right.