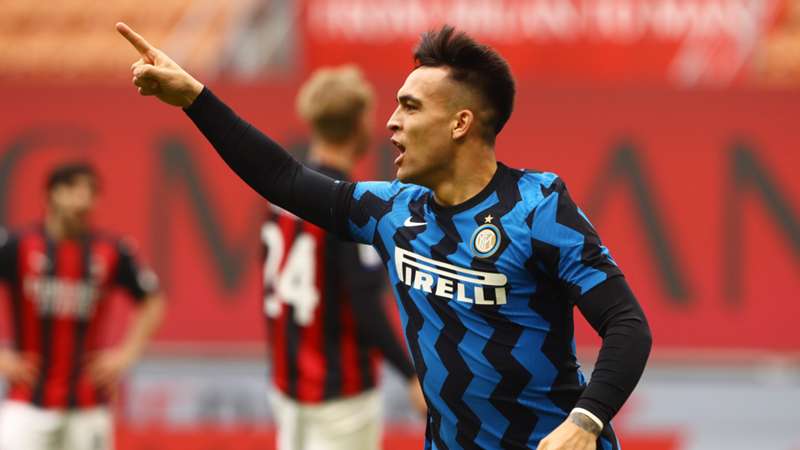 A brace from Lautaro Martinez and one from Romelu Lukaku capped a superb all-around performance from Antonio Conte's side.

Inter Milan are now four points clear at the top of Serie A after putting neighbours and title rivals AC Milan to the sword in a complete performance at the San Siro.

Romelu Lukaku and strike partner Lautaro Martinez combined for the latter to break the deadlock after just five minutes of the table-topping clash, with the Argentine finishing off a superb team attack early in the second half to double the advantage.

Lukaku got the goal he deserved for his overall efforts, capping a surging run forward with a strong finish shortly after the hour mark to put the result beyond doubt.

Ivan Perisic, Christian Eriksen and Achraf Hakimi were superb for the 'visitors' as well, while veteran goalkeeper Samir Handanovic produced three superb saves just after the interval — two of which to deny Zlatan Ibrahimovic at point-blank range — to keep his side ahead while the game was still close.

Re-live the major happenings in the latest edition of the Milan derby below.

facebook twitter whatsapp
Full-time at the San Siro and Inter have comprehensively beaten neighbours AC Milan by three goals to nil. They're now four points clear at the top of the Serie A table.

facebook twitter whatsapp
This could very well be the game we look back at when the trophy is decided later in the season. It's Milan 0-3 Inter with just minutes remaining.

facebook twitter whatsapp
Lukaku has one of his own now and it's 3-0 Inter! Hakimi with fantastic work in the build-up, staying on his feet to keep the move whirring before the Belgian striker took over with a powerful run and strike.

facebook twitter whatsapp
Martinez at the double after a superb ball from Eriksen allows Perisic to find Lautaro's perfectly-timed run. What a goal, and Inter are cruising!

facebook twitter whatsapp
The veteran Inter keeper with three world class saves in as many minutes at the very beginning of this second 45 to keep his side ahead. What a start to the half!

46' Second half kicks off

facebook twitter whatsapp
After 45 minutes, it's Milan 0-1 Inter. The Nerazzuri have been really, really good so far and will go four points clear at the top of Serie A if that continues for another 45.

facebook twitter whatsapp
Perisic draws a one-handed save from Donnarumma and Lautaro is unable to convert the rebound! Almost two for the Argentine and for Inter! Still 0-1 for now.

facebook twitter whatsapp
Lukaku breaks away on the right and tries to square it to Martinez but it’s blocked by Kjær. However the Belgian tries a second time by lifting it over the top, and Martínez heads it in. Great, great work by Romelu and it's the 'visitors' who have the lead.

facebook twitter whatsapp
Hello and welcome to DAZN's live updates service for today's big game in Italy between Milan rivals AC and Inter. These two are first and second in Serie A, with the winners set to sit clear at the top of the table this weekend.