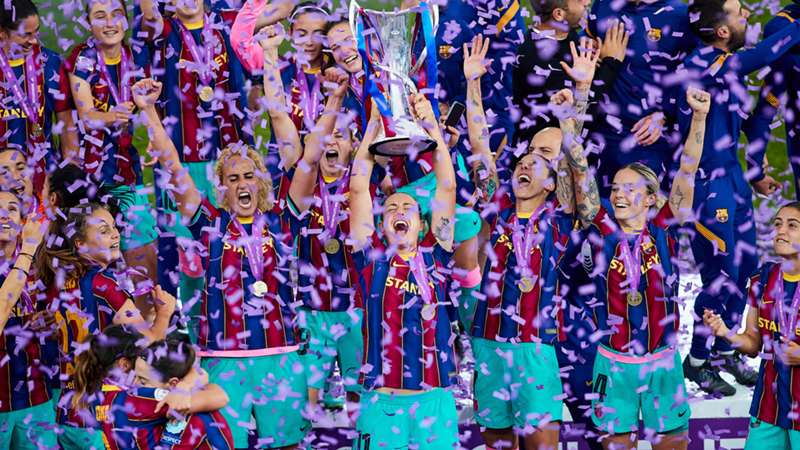 A landmark deal with DAZN sees the UWCL gain unprecedented coverage through 2025.

For the first time in its history, the UEFA Women's Champions League will be available globally through a single broadcaster.

DAZN is the new worldwide home of the Women's Champions League, after a four-year agreement was struck between UEFA and the global sports streaming platform. For the first two years of the deal, DAZN will make 61 matches of each season available on its popular streaming platform and also for free on YouTube.

That means fans of defending champion FC Barcelona, as well as those who support perennial powerhouses like Olympique Lyonnais, Chelsea and VfL Wolfsburg will be able to watch the likes of Lieke Martens, Ada Hegerberg and Pernille Harder in Europe's most prestigious women's club competition easier than ever before.

For the next four seasons, fans won't have to wonder where to find the matches. Such easy and reliable access to the women's game is groundbreaking, according the all-time leading scorer in UWCL history.

"For years, people have struggled to have access to our games, wherever they were living," Lyon star Hegerberg said. "Now, they have the unique opportunity to watch all over the world if they’d like to. The game is opening up to millions, potentially billions, which is unprecedented.

Here's all you need to know:

How to watch the UEFA Women's Champions League

The four-year deal between UEFA and DAZN means certainty and reliability for fans of women's club football. All four seasons of Women's Champions League football will be available globally on DAZN, with several matches also on YouTube. Here's the breakdown:

All 61 matches from group stage onwards live on DAZN and free-to-air on DAZN’s YouTube channel.

All 61 matches from group stage onwards live on DAZN - with at least 19 matches free-to-air on DAZN’s YouTube channel.

How can I stream DAZN?