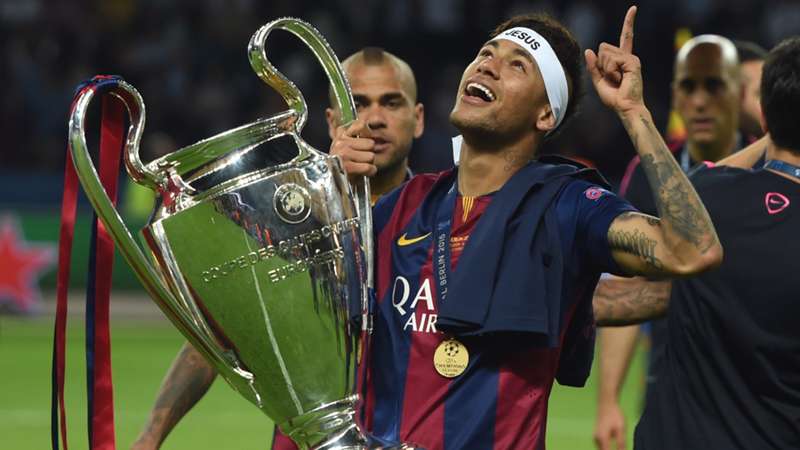 PATRIK STOLLARZ/AFP via Getty Images
Check your region for Canelo vs. GGG 3 on DAZN

The Brazilian superstar revealed not one, but two of his favourite UEFA Champions League goal scoring efforts to The DAZN Soccer Show.

The UEFA Champions League is a competition which Paris Saint-Germain striker Neymar has thrived in.

The Brazilian forward has scored 41 goals in 75 appearances during his time at both PSG and Barcelona, and on the eve of a new European campaign, he will be looking to add to his record and potentially win a second UEFA Champions League winners' medal.

There have been some memorable strikes from Neymar on European club football's biggest stage but when asked by The DAZN Soccer Show to reveal his favourite goal to have scored in the competition, the 30-year-old struggled to name just one.

"It’s hard to choose one, but I’m going to choose two that I like.

"There was a free kick against Red Star Belgrade, I think, for PSG."

The second goal chosen by Neymar also stood out due to the emotions he felt after scoring in one of the biggest games of his playing career.

"The other was in the final for Barcelona against Juventus. That was an incredible moment and we lifted the trophy. I’d go for that one too," Neymar began.

"I pulled my jersey off and I think the game ended then because it was the last second of the final.

"It was a spectacular moment.

"It’s hard to put those emotions into words."

Neymar will be hoping he can help steer PSG towards their first ever UEFA Champions League title when the French giants get their 2022/23 campaign underway against Juventus on Tuesday night.