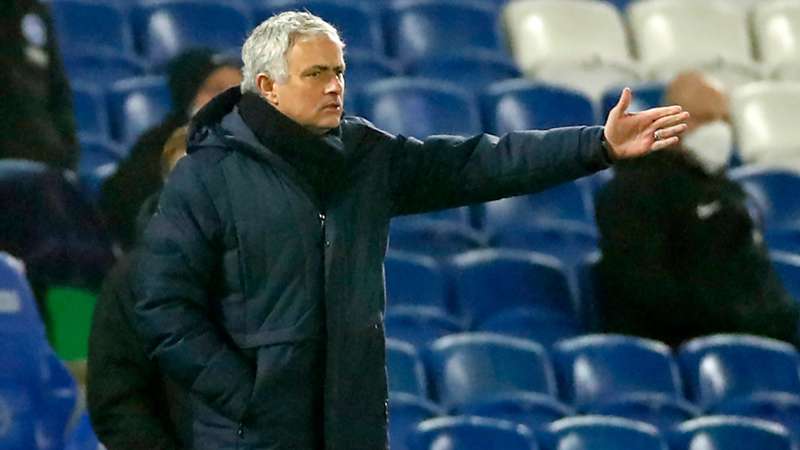 Daniel Levy is looking for potential replacements to save the club's season.

According to reports, Tottenham Hotspur is preparing to replace Jose Mourinho with Julian Nagelsmann if the club’s poor form continues.

Spurs have fallen away this season after emerging as early contenders for the Premier League title in a coronavirus-hit season.

However, they have just one win in their last five league games and have lost the rest - the most recent defeat coming to West Ham at the weekend. The loss left them in ninth place on 36 points, nine points short of David Moyes’ side in fourth place, and even out of the Europa League spots.

Mourinho’s time at clubs often comes to an end amid acrimony with players after an alarming drop-off in form, but the atmosphere with most of his squad appears to still be good. An ankle injury has not helped the club to star striker Harry Kane.

The Telegraph claims that Spurs are now considering their options and preparing to find a replacement for the 58-year-old Portuguese if their struggles continue.

Number one on any shortlist would be RB Leipzig boss Julian Nagelsmann, the 33-year-old German. He has impressed with his exploits in the Bundesliga and the Champions League at the young franchise created by the energy drink company Red Bull.

Spurs are still in the Europa League, and winning the tournament would give the side a path to the Champions League next season, a route he used in his first season as Manchester United manager, but it is a risk to think there is any guaranteed success in a knockout competition which has been restocked by clubs who came third in their Champions League groups.

Nagelsmann is known for creating a young and attacking side at Leipzig, which would appeal to Spurs' traditions, and was recently linked with a switch to the Premier League when Chelsea sacked manager, Frank Lampard. They elected to appoint fellow German manager Thomas Tuchel instead.

There are two potential obstacles to any move for Nagelsmann. He is contracted to his current club, who would not necessarily be keen to give him up as they challenge for a Bundesliga title. The second is that Jose Mourinho is believed to earn around £15 million a year with no break contract to allow Daniel Levy to cut short his deal, which runs until the summer of 2023.