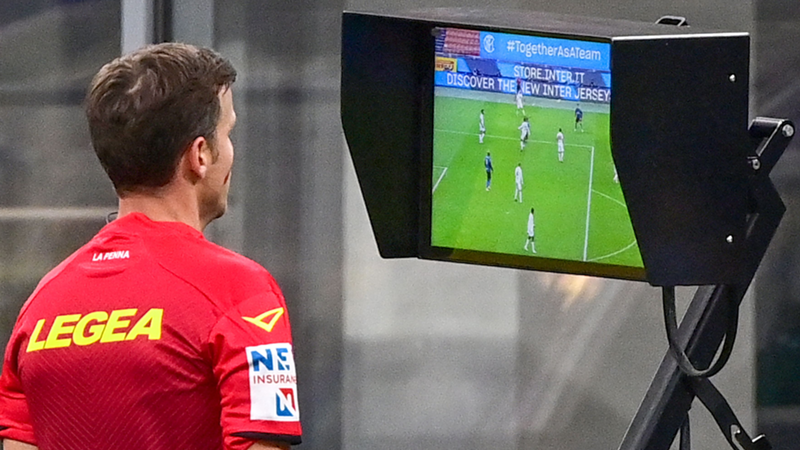 A detailed look at how the "Video Assistant Referee" works in the world of football.

VAR is the acronym for “Video Assistant Referee,” an officiating system that employs video review to help match officials enforce FIFA's Laws of the Game.

Here's a look at how it all works and how it came to be ubiquitous in the world's biggest sport.

The history of VAR in world football

VAR was written into the Laws of the Game by the International Football Association Board (IFAB) in 2018, but it was in limited use for several years prior.

An early version of VAR was trialed in the Eredivisie during the 2012-13 season, which led to the Royal Netherlands Football Association (KNVB) petitioning the IFAB to allow for further testing. The IFAB approved the petition, and in July 2016 a friendly between Dutch clubs PSV and FC Eindhoven became the first match in the world to use VAR in its current form.

Things snowballed from there, as various other competitions jumped on board to trial the new system. In 2017, Australia's A-League became the first domestic top-flight to fully implement VAR within its competition, with Major League Soccer adopting the system for the second half of its season that same year.

International tournaments quickly followed suit, and on March 3, 2018, the IFAB officially codified VAR into the Laws of the Game.

When is VAR used?

So when exactly does VAR get involved with a match? There are four specific cases outlined by IFAB VAR protocol:

"If the referee penalises an offence and then gives the wrong player from the offending (penalised) team a yellow or red card, the identity of the offender can be reviewed; the actual offence itself cannot be reviewed unless it relates to a goal, penalty incident or direct red card."

Who determines when a VAR intervention happens?

A common mistake is the conflation of the terms "VAR" and "video review" — they are two distinct terms that have become intertwined.

As the IFAB VAR protocol dictates, a "video assistant referee (VAR) is a match official, with independent access to match footage, who may assist the referee only in the event of a ‘clear and obvious error’ or ‘serious missed incident’ in relation to" the four categories of decisions outlined above.

"The VAR watches the match in the video operation room (VOR) assisted by an assistant VAR (AVAR) and replay operator."

As the VAR and AVAR have access to broadcast footage, they are uniquely empowered to communicate with the match officials and "can only speak to the referee by pushing a button (to avoid the referee being distracted by conversations in the VOR)."

The VAR will review footage and replays during game action and, if deemed necessary, will request that the referee view replays on a pitchside monitor.

Who decides if an on-field review is needed?

As noted, the VAR and AVAR watch live broadcast footage of the match, as well as replays. They communicate to the referee if an on-field review is deemed necessary, but the usage of the pitchside monitor is fully at the discretion of the referee.

Who makes the final decision after a video review?

From the IFAB VAR protocol: "The referee is the only person who can make the final decision; the VAR has the same status as the other match officials and can only assist the referee."

"When the review process is completed, the referee must show the ‘TV signal’ and communicate the final decision. The referee will then take/change/rescind any disciplinary action (where appropriate) and restart play in accordance with the Laws of the Game."

Can players or coaches request the use of VAR?

Players, coaches or team officials are not able to request the use of VAR to review game actions. Only match officials (including the VAR and AVAR) can decide when video review can be used.

How often may VAR be used in a game?

There are no usage limits for VAR or on-field review. The match officials will be able to use it whenever they deem it appropriate and necessary.

Which leagues use VAR?

As of May 2022, there are nearly 60 leagues and several dozen domestic cup competitions that use VAR. These include the Premier League, Bundesliga, Serie A, La Liga, Ligue 1, the FA Cup, Coppa Italia, the Copa del Rey, DFB-Pokal, Major League Soccer, Brasileirão, Argentine Primera División and many more.