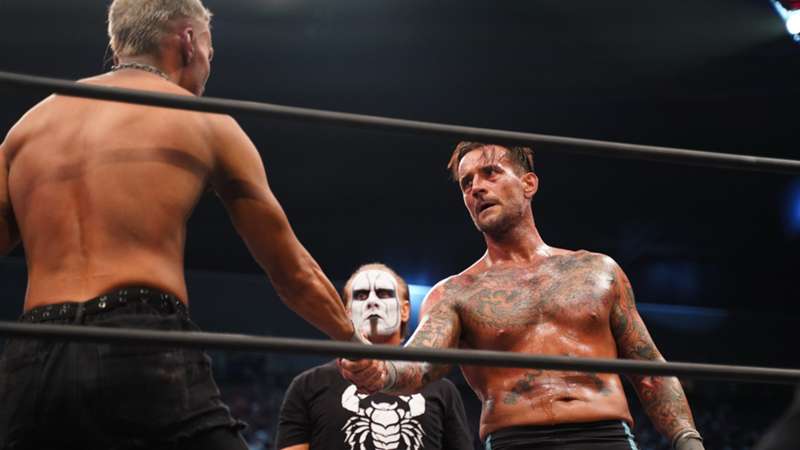 Plenty of surprises at the end of AEW All Out.

HOFFMAN ESTATES, Ill. — CM Punk returned from a seven-year hiatus to defeat Darby Allin. The crowd appeared satisfied with their hometown guy winning in his return to action. They hadn't seen nothing yet. It was just getting started.

After Kenny Omega beat Christian Cage in the main event, The Elite came down to congratulate Omega. The group put a beating to Cage. The Jurassic Express ran down to help their friend. But The Elite put the boots to them. Then former WWE NXT Heavyweight champion Adam Cole came out to an enormous pop to seemlingly to help the beaten guys. Instead, Cole put the boots to Jungle Boy.

As Omega was closing the show,"The Final Countdown" music blared and out came former WWE Heavyweight champion Bryan Danielson (aka Daniel Bryan) to a thunderous reaction. Omega and Cole slipped out while Danielson put the boots to Matt Jackson.

Jackson went back a bit and Danielson delivered his patent flying running knee with the crowd in unison chanting "Yes".

Very good match. The crowd was slow to get into it due to fatigue from Punk-Allin. But they picked it up and so did the intensity of Omega and Cage.

They were battling on the apron. Omega tried for a One-Winged Angel through a table but Cage slipped out and into the ring. He went back onto the apron and speared Omega through the table.

Cage went to the top rope but Omega got his knees up. Omega started talking trash to Cage and delivered three vicious V-Triggers. Cage did an inverted sharpshooter when Omega's manager Don Callis called out for Luke Gallows.

Omega went for another V-Trigger but Cage moved and he hit Gallows. Cage went for a Kill Switch but Omega reversed and tried for a One-Winged Angel. Cage reversed into Kill Switch. He went for the pin but Omega kicked out at two.

Cage put Omega on the top rope and Callis went into the ring to distract him. Callis went out back onto the floor. Cage slowly went up but Omega grabbed him for a thunderous One-Winged Angel from the top for the pin to retain the title.

Another classic match from Omega and Cage.

facebook twitter whatsapp
Beyond the champion's slip on the barricade, Omega and Christian are having a good match.

The crowd just can't seem to get out of second gear. Seem a bit wore out from the Punk match. Let's see if they pick it up as Omega and Christian are just heating up.

facebook twitter whatsapp
It is time for the main event of AEW All Out as Kenny Omega defends the AEW Heavyweight championship against IMPACT World Champion Christian Cage.

Cage beat Omega in a fantastic match on the debut episode of AEW Rampage on Aug. 13 to win the IMPACT belt.

This should be nothing short of a classic. Omega has a point to prove as he doesn't want to be overshadowed by Punk or the Tag title match.

Can Cage do it one more time?

Not much to the match. Wight dominated the entire match and finished off Marshall with the chokeslam for the win.

A good time to hit the bathroom and stretch the old legs.

Allin hit a swanton from the top rope onto Punk. He rolled Punk back into the ring and went for the Coffin Drop. Punk sat up like The Undertaker and laughed in the process.

Punk went for the GTS but Allin slipped out and rolled Punk up for a near fall. After a short exchange, Allin jumped up and Punk flattened him with a GTS for the one, two, three.

The Best in the World! @CMPunk wins in his first match back in 7 years! #AEWAllOut pic.twitter.com/SOpg6VsYWL

The crowd became unglued at seeing their hometown kid get it done. Sting came down to the ring and stuck out his hand to Punk, who shook it. Punk went towards Allin, who was slow to get up.

Allin got up and they shook hands.

Didn't know what to expect considering Punk had been off for so long. The cardio held up and he more than held his own.

facebook twitter whatsapp
Punk hits the GTS flush to Allin's chin, but the bounceback from the blow sends Allin out of the ring.

Punk looks good so far. Can see he's getting a little winded. Can he get a second wind?

Punk returns to in-ring action for the first time in over seven years.

Punk gets a massive reaction from this crowd, who sings him all the way to the ring. You can tell he's extremely nervous. He's got a lot to prove.

Chris Jericho submits MJF to save his career

The match was restarted. Jericho rolled up MJF for a two-count. He went for a Judas Effect and missed. MJF reversed it into a Salt of the Earth. Jericho was about tap out when he reversed out of into a Walls of Jericho. MJF tried his hardest to reach the ropes but Jericho pulled him into the middle of the ring. MJF had no choice but to submit.

A surprisngly good match that had a ton of emotion. Glad to see Jericho is still going to be wrestling.

Could this be Chris Jericho's final match?

facebook twitter whatsapp
Next at AEW All Out is MJF taking on Chris Jericho. If Jericho loses, he can no longer wrestle in AEW.

Jericho got played to the ring by a member of his band Fozzy. As he was walking down, the crowd sang him into the ring. What a moment!

Was down to Nyla Rose, Thunder Rosa and Soho.

Rose got tossed over the ring apron and Rosa double kicked Rose to the outside to be eliminated. It's came down to Rosa and Soho.

Rosa had Soho on the apron and tried everything to knock her to the floor but was unsuccessful. Rosa picked up Soho in a firemans carry but couldn't keep her up.

After an exchange of moves, Soho delivers a jump bicycle kick to knock Rosa off the apron to win and earn a crack at Britt Baker in the future.

facebook twitter whatsapp
Ruby Soho (aka Ruby Riott in WWE) is the joker in the Battle Royale and receives a monster reaction.

facebook twitter whatsapp
Up next at AEW All Out is the Women's Casino Battle Royale. The winner gets a future title shot against Britt Baker.

What an amazing match! Words cannot describe what we just saw.

Double package piledrivers by Penta and Matt Jackson on the apron. Penta gets Matt on the top rope and executes a Canadian Destroyer which gets the crowd to chant "Fight Forever".

Fenix went to the top for a package piledriver but somehow Nick Jackson made the jumping save.

Fenix then climbed to the top of the cage for a another package piledriver. But Nick superkicked Penta and rushed up the cage but Fenix kicked him right to the head. Fenix walked to the corner and performed a splash onto the other three guys. One more package piledriver sealed the deal and we have new champions.

The crowd went ballistic for the finish. You could the outpour of the emotion from both Fenix and Penta.

Definitely the best tag team match of 2021 and one of the best overall.
Both teams somehow made it back to their feet and exchange a series of superkicks.

facebook twitter whatsapp
The Bucks looked to be moments away from retaining the belts when they hit the BTE Trigger on Penta. But somehow, a worn out Fenix saves his brother and the crowd loses their minds. Can they win the belts?

facebook twitter whatsapp
Brandon Cutler, a friend of The Young Bucks, comes to ringside and tosses in a bag. Matt Jackson undoes the bag and it's a shoe with thumbtacks in them. Jackson comes with a superkick but Rey Fenix survives. Wow, that looked like it hurt.

facebook twitter whatsapp
If you expecting anything less from these teams then you don't know tag team wrestling. We've seen great high flying, mixed in with good storytelling. The crowd is behind every move from both teams.

The champs are looking great and using the cage to their advantage.

facebook twitter whatsapp
Right now at AEW All Out, The Young Bucks defend the AEW Tag team titles against The Lucha Brothers in a steel cage match. The cage about 20 feet high and will be used. This should be exceptional.

What an entrance by the challengers, the #LuchaBros

The beginning came in a homage to her boyfriend and wrestling free agent Adam Cole when Baker went to the top rope and executed the Panama Sunrise. A curb stomp by Baker and a smooth transition into the Lock Jaw and Statlander immediately taps out.

A great match. That was the one Baker needed to solidify herself as a legit champion.

The crowd erupts for Baker, chanting "DMD" for the dentist from Pittsburgh.