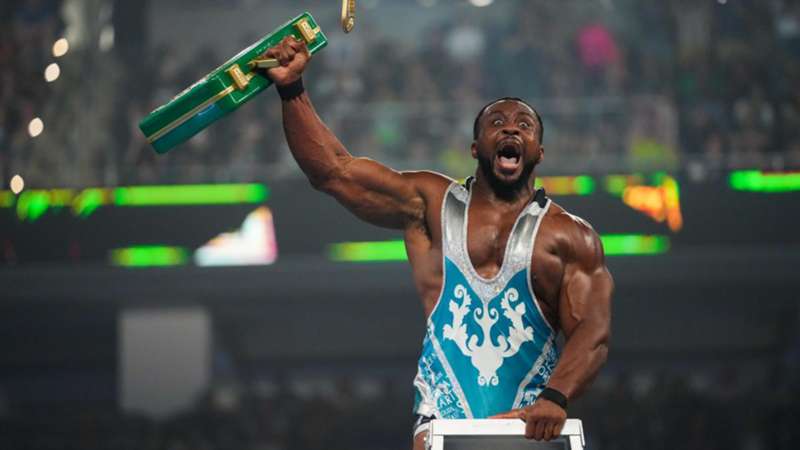 The sky is the limit for the 2021 Men's Money in the Bank winner.

Pro wrestling fans had wondered when Big E was going to break through and be inserted into the main event picture in WWE.

People don't have to wait anymore as the former college football player at the University of Iowa has broken through as he won Sunday night's Men's Money in the Bank briefcase over Drew McIntyre, Riddle, Ricochet, Seth Rollins, John Morrison, Kevin Owens, and Shinsuke Nakamura.

BELIEVE IN THE POWER OF POSITIVITY.@WWEBigE is MR. MONEY IN THE BANK! #MITB pic.twitter.com/CURawYlViZ

The biggest question is who will Big E cash-in the briefcase on? Could it be Universal champion Roman Reigns? Or WWE champion Bobby Lashley? Maybe it will be whoever they face at SummerSlam on Aug. 21.

After his historic victory, Big E talked with DAZN News about what it meant to win the MITB briefcase, OurHeroesRock.org, and who he'd like to cash-in on.

DAZN: Where's the (Money in the Bank) briefcase?

Big E: I just got in my house like half an hour ago. It's sitting on my floor next to my TV. I got to figure out where to put it, but that's where it is now.

BE: I could catch a jet now. It’s not that difficult. I am currently at home, but it's a two-hour flight. You never know.

It’s the John Cena show tonight. So I am intrigued, though. This is the first Raw back with a live crowd. That Cena pop. Can I be a bit of a mark right here for a second? That Cena pop was one of the loudest I can remember.

There are moments where you know something's gonna come. So you kind of stick your head out, and you can kind of see the fans. I wish I had known, but I was back doing interviews and whatnot afterwards. But I watched it back. It was the loudest pop, and I said for a while was when Dolph (Ziggler) won Money in the Bank. But I was at ringside. This one might be the loudest pop I've ever heard since I've been here. They were very excited for John.

DAZN: You winning Money in the Bank, just because of the crowd's reaction and the story of you, was Sunday night the biggest night of your career so far?

BE: I tell my close friends I hate making lists or ranking things because I'll make a declaration now, and I'll change my mind in two minutes. When I was thinking about it, I definitely said top five. But even that felt pretty conservative. I’ve done so many incredible things as a trio, obviously with The New Day, but man, that might be (number) one. It's close. If it's not number one, it's in contention for number one.

I tell people, being Mr. Money in the Bank is incredible. But if we did that with no crowd, it's very cool, but it doesn't feel nearly the same. It's not the same. What I remember 20, 30 years from now, is just the moment of hitting the Big Ending off the ladder. That crazy powerbomb onto the ladder from Seth (Rollins) to KO (Kevin Owens). Then it feels like Seth is about to win. But I felt like as soon as I started to get up on my feet and slide in, from then until the end of the segment till they got me out of there, it's a kind of drug, a kind of high that is unmatched.

I hope everyone gets to experience that, not necessarily in pro wrestling if you're not a pro wrestler, but whatever it is in your field, whatever it is that gives you that kind of feeling. It's incredible and that's why we do it. We were doing the best we could in the Thunderdome era. I think I forgot how incredible it is to be in front of fans because it's night and day. I almost felt like we were doing something different. We were like, this is now pro wrestling, and what we were doing before was something like a cousin to pro wrestling. It sounds corny, it sounds cliche, but I think pro wrestling needs fans more than any other industry live.

Do you think you have what it takes to be a ring announcer at #SummerSlam in Las Vegas?

BE: (Laughs) I didn't even consider that. I never thought of actually entering myself. But now the cool thing is, I'm not cool. I'm in my mid-30s. Now, so Tik Tok for me is very foreign, but I am told it's very in vogue. The beautiful thing is we're using newer technology, newer platforms to bring people in. I'm excited to see the feedback. We get to see how many people reach out. That's the beautiful thing with green announcers is I've seen people who are former gymnasts or people who come from all walks of life to do something like this. So I'm excited to see how that shakes out and to see everyone at SummerSlam for that.

DAZN: I was glad to see this initiative come through with OurHeroesRock.org. You guys exceeded in terms of getting the money raised through Kickstarter. What is the status right now of the first short film?

BE: It's going really well. Right now, we're just in the production stage. Andreas (Hale) is our mutual friend, and we talk daily. So right now, we have a song that we can't put out, but we love it. (Musical artist) Rhapsody sent her stuff in. Eric produced a beat that we love. I think we're pretty much done with our fine-tuning of the song. Jonathan Davenport is our third partner, another friend of mine. That's the beautiful thing for me is getting to work with my friends, who aren't just like, ‘Oh, these are my friends, and they’re schlubs’. But they're incredibly talented. Johnny wrote a script that we also love. So essentially, we're just at the stage now where we're pretty close to sending our stuff off to the animators and doing some storyboarding.

But it's been really cool for me, even though a lot of the stuff I'm not actually doing, but we're kind of challenging ourselves in a different way. I couldn't ask for better partners. We have so much fun working together. I'm often reminded of the beginnings of The New Day with those guys because of our bond, the way we communicate, the way we work together has been really incredible. We all feel the very same about what we want this to be. The vision we have for this is telling stories. There's so many stories of black communities or black people, activists, authors, artists, so many stories. We all talked about the fact that the three of us, we didn't learn until maybe late in high school or college or didn't learn until later in adulthood. Our hope is that we can teach young people in a very engaging way. That's why we use hip-hop.

We didn't just find any old rapper. We found Rhapsody, two time Grammy nominee if you're a hip-hop head at all. Rhapsody is incredible. She’s one of the best rappers, one of the best artists on this planet. She's incredible. We have Eric, who's (an) incredible producer too in his own right. We're really excited about it. We're hoping to make this short film to put it out in the next few months. Hopefully, this doesn't die here for us. In our minds, we want a series so we can tell more of these stories.

DAZN: As soon as you won, people started speculating on who you’ll cash in the briefcase on. Many people bring up Bobby Lashley because of his feud with Kofi (Kingston) and (Xavier) Woods, wanting to see you in the main event spot and the significance of two African-American men battling for the WWE Championship. What would it mean to you to face Bobby Lashley for the WWE Championship?

BE: I think it really does have a lot of significance. I think that's a great point. As far as you know, two black men competing for that title is incredible. I think it also means more to me because I think Bobby has done an incredible job elevating himself. I think seeing him with the Hurt Business with MVP; he's a guy who you knew had what it took but wasn't there. I think back to the stuff with him and Sami (Zayn). When you watch that program, you don't think future world champion. He was in that doldrum of sorts. I think this last year when I watch him, he looks like ‘The Guy’ to me. He looks like a star. He moves like a star. He performs like a star. I think he's incredibly talented. It's odd to think at 45 that he's really hitting his stride.

DAZN: I have a place where you can cash in that briefcase. There's a big stadium that you're going to be at on August 21 (called) Allegiant Stadium in Las Vegas. So if you do decide to cash it in, who would you rather cash it in against? Bobby Lashley or against whoever he's going to face at SummerSlam, Roman Reigns, or your good buddy John Cena?

BE: Those are all great options. I feel Roman’s the guy though. Roman’s the guy in the industry, and if you want to be remembered, if you want to do something cool, something special, that's a great way to do it. Roman’s on a tear. This is one of the best runs I can remember. I feel like he's definitely hitting his stride in a way that he hasn't before. You can look at the entire scope of the rest of the industry, and you can determine who you think is the number one guy, who you think is the best, who should be at the very top. I think it's not that difficult to make an argument for Roman being number one across all brands, across all boards. Beating him means that whoever beats him for that title, it's going to be memorable. It's going to mean something, and why not me?