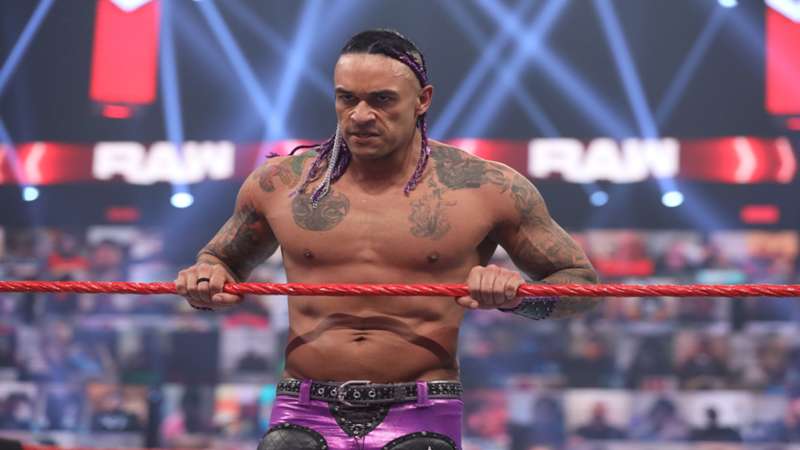 One of the all-time greats in pro wrestling has helped Damian Priest get to the stage he's currently at in the WWE.

It took longer than expected but Damian Priest accomplished his wrestling dream when he signed with WWE in the fall of 2018.

The beef culiminated on night one of WrestleMania that saw Priest and Bunny defeat The Miz and Morrison. One of the highlights was the performance of the Grammy award winner, who put on arguably the best showing for a celebrity making their pro wrestling debut.

Before he appears on Monday's WWE RAW, Priest talked with DAZN News about working with Bad Bunny, what he learned from him, the musicians dedication to the wrestling business and how Triple H has helped him get to the point he's at in WWE.

DAZN: What's life been like for you since the Royal Rumble when you shot up to the main roster to be paired with Bad Bunny?

Damian Priest: It's been crazy. It’s everything I've ever wanted and more. Like you said, from the Royal Rumble and just the amount of attention I've been getting. It got crazy, especially leading into WrestleMania. It's a wild ride, but man, I'm loving every second of it. It's just been what I've always wanted. All the work and the time you put into it. It's all part of it. I welcome it all, and I love it.

DAZN: Guys and girls that make the WrestleMania debuts normally don’t get put in prime positions. You think of Brock (Lesnar) and (Kurt) Angle, to name a couple of guys. What does that mean to you in the fact that you got this prominent spot in your first WrestleMania?

DP: I don't know how I got here. It means the world man like, this is the dream, right? This is why I wanted to come here and to actually achieve it and then to be in there and not just have a match, but like you said, we created a moment, and it was a good one. I had a blast. It’s surreal. I don't understand how I was chosen to be successful in that spot. It could have been anybody, but for whatever reason, it was me. I think all of us in the ring because it takes all of us. I think we all knocked it out of the park. I was looking out into the crowd and seeing all the smiling faces of people jumping up and down. That was just as much like we shared all that together. I think myself, Bad Bunny, Miz and Morrison, Eddie the referee, the announcers, and all the fans, we all shared that together. We were all genuinely excited and happy, hyped and all the ball of emotions that are positive. We all shared those together in that moment. That's something I will never forget.

DAZN: WrestleMania has always been associated with celebrities. Sometimes the talent gets in the ring. Sometimes they’re enforcers outside the ring or ring announcing. You look at Bad Bunny, and no one was really like, ‘Okay, here's this musician. How well is he going to do?’ We've seen some flops in the past, but we saw last year with Pat McAfee in one of the best performances for the first time in a wrestling match. He was putting in the work, though, at the WWE Performance Center. What did it show you about the dedication he put towards the craft because some celebrities come in, cash a check, and bounce out?

DP: We started working out because I trained with him from the get-go. Every time he was in the ring, I was with him and others like Norman Smiley, Adam Pearce, Drew Gulak, Brian Kendrick. Other hands helped his training and getting him ready. But I was there the entire way—every single time. We got in the ring before the Royal Rumble. I worked with him to get that crossbody. We all made sure that he was ready for every little step. He put in work at the PC. He also put in work before Raw. Sometimes we'd have to go to Tampa and put in work before Smackdown. We didn't have to be there, but he wanted to put in extra time. He needed extra time. So he'd say, ‘Hey, is there any way we can get in the ring?’ We had extra rings at the time we were at Tropicana Field. He wanted to get some ring time there. So let's go for two hours, let's drive two hours to spend two hours and then drive two hours back.

It was all worth it. He had no issue putting in the work. I knew he would surprise a lot of people because though again like you said, nobody expected it. Nobody knew. You hear that he's training. Anybody can train. That doesn't mean you're going to be any good. It doesn't mean you're taking it to the fullest seriously. There's been other celebrities, and they train, but they didn't train to the level he did mentally. He took this very prideful. He didn't want to embarrass himself, the company, his fans, our fans, me, and anybody else in the ring because the first thing he was worried about was earning respect. He didn't want to disrespect anybody. He wanted to make sure that people didn't like him just because he was a celebrity here. He wanted to earn the respect of the boys and girls first and then go from there. I remember the Friday before Mania, Randy Orton going up to him and saying, ‘Hey, man, I want to say thank you because nobody, I've never seen anybody treat this business the way you have. So thank you for doing that and being so respectful to our stuff’. Bad Bunny is a humble dude. He's quiet and shy. He was just like, ‘No, no, my pleasure. Thank you for accepting me’. That's who he is. I was so happy that he got to deliver the way. He did shock everyone because he earned it. He really did earn that opportunity and that moment.

DAZN: What did it show you about the humbleness that he had towards pro wrestling?

DP: It's inspiring. It shows you don't have to be a bad person to succeed. You could just be good and just work hard. That was the one thing that why we became friends, and we hit it off. It was our way of being. We wanted to reach our dreams. We didn't want to have to change the way we spoke, the way we treated people, the way we dress. We want to do it on our own terms. If it doesn't happen, we're okay with that. We're still having a good time and doing what we love doing. We're just fortunate that we did. He's really fortunate because he's him. But it shows. Getting to know him and seeing him, I understand why. There's a reason why there's so much, and he's like a magnet to success. I can see why it's because he puts in the work, and he's just a good human being for it. He's an actual good human being. It showed even when he transitioned over (to WWE). I said it to him then, and before he left, I said it again, ‘Hey, man, you're going to come back. This will be something that you can do no problem. Realistically, there's not much I can't see him in the entertainment business not being able to accomplish if he decided to go for it because of the way he dedicated himself to this. I could only imagine that's how he dedicates himself to his music and his companies.

DAZN: I saw on Twitter a couple of hours ago a little interaction you had with Triple H. I know from talking to him in the past how much he cares about the guys and girls that have been in NXT and even to see their growth when they've gotten to the main roster, and they've prospered like yourself. What is he meant to your career?

🙌Grateful and ready to rock this place! 🤘 https://t.co/NPP5rbaZM8

DP: There's a reason why that’s an ongoing joke with every talking about H at Performance Center is because we’re like his kids. I'm not sitting here right now if it was not for him. He's the one that brought me in to start with and said we're going to do something with you. He was always on top of me and telling me to be yourself, go out there and be like the dude. I talk to him on a regular basis. I like this guy. He was pushing me to do that. Finally, I figured it out around my match with Finn Balor. He’s like non-stop on me even to this day. I see him multiple times a week. We still continue to talk. I go to every NXT taping.

I'm always there. I'm always trying to learn, do whatever works in producing the shows, and going over entrances. I'm usually behind him, trying to listen to see how his brain sees things the way it does. It's just incredible. He says things and does things that I'm like, ‘How did I not think of that? It’s so obvious’. I told him one day, and I was like, ‘It goes without saying, but you're really good at this’. He just started laughing. But he means the world. I feel like I know he truly likes his job, right? He has to care about us. He wants us to succeed. That is his job. But when he goes out of his way and says certain things in private, and helps you and he tells me to call him if I have a question, or need help with something, need advice, need to talk to somebody, if something doesn't feel right, don't keep it in and just let me know if I can help guide you through that. Those things have nothing to do with his job. There's other people for that. But that's just him caring about the humans and being a good person. That means more than a lot of the other stuff. For instance, when I came back through the curtain at WrestleMania, he was the first one to talk to me, say a lot of nice things, and basically let me know that what he wanted for me, and he knew I can have that. He was happy that I was able to enjoy that moment. A hell of a human being that guy is.