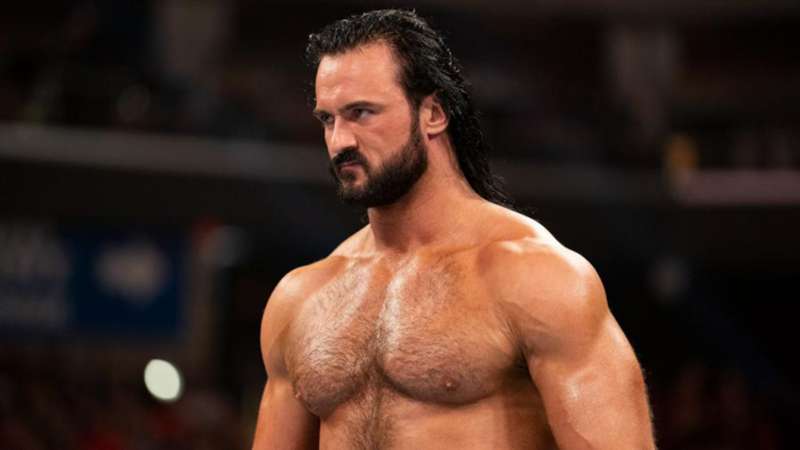 The former WWE champion has plenty of options on the horizon.

Drew McIntyre started his career in WWE by debuting on SmackDown in 2007 and then re-debuted on the blue brand in 2009.

Since then, McIntyre's career has seen a series of twists and turns. He ended up getting released by WWE in 2014. Instead of sulking, the native of Scotland did something about it and turned everything around.

The 36-year-old went on a worldwide excursion and appeared in multiple promotions around the world to hone his craft to become one of the premiere talents in the pro wrestling business. What he did caught WWE's attention and he returned to the company in 2017 on NXT.

From there, McIntyre went on to win the NXT Heavyweight title in 2017 before heading to the main roster on Raw in 2018. At WrestleMania 36 in 2020, McIntyre achieved his life long dream, when he pinned Brock Lesnar to become the WWE Champion.

Now, the 2021 WWE Draft is upon us. Night one took place on Friday's edition of SmackDown which saw McIntyre being drafted and returning to his roots, starting on Oct. 22.

Night two of the draft is on Monday's edition of Raw and McIntyre talks with DAZN News about the Draft, feuding with WWE Champion Big E and his thoughts on a possible long-term feud with Roman Reigns.

(Editor's note: This interview was conducted before McIntyre got drafted to WWE SmackDown on Friday and has been edited for length and clarity.)

DAZN: The first two times we chatted this year, I think you were at home. The third time we chatted, we were in Las Vegas for SummerSlam. So I'm taking a guess, but right now, you're not at home.

Drew McIntyre: I'm not at home right now. I think the first few times we talked was probably in St. Petersburg, Florida, where I used to live. Then we talked in Vegas, and right now, we are at Smackdown. I just got to the building. Very exciting. The next time we talk, you’ll get to see my lovely Nashville home. But for now, we're at Smackdown.

DM: Nashville, I love it. I've been in Florida for so many years. I grew up there. A lot of significant points of my life and career happened there. Met my wife there. She moved from West Virginia to Florida in her teens, and I moved to Florida in my early 20s. We felt like it was time for a fresh start, a change of scenery, and somewhere with seasons. As much as we love the heat all year round, we both grew up with Christmas being cold, having snow in the lakes, which Nashville does have seasons, and that big stupid Irish head Sheamus lives there and his fiance, so we're friends with them. So it's good to be around them again. The people are just really nice in Nashville. I love country music now. I’m a big country music fan now since Nashville is the home of country music.

DAZN: When we seen you on Monday’s Raw, you closed the show pointing the sword at Big E. If it was up to Drew Galloway (real name), where would you want to end up?

DM: I've thought about this a lot this past week. When I returned to WWE, I returned to NXT initially but then Monday Night Raw, and over the past three years, Raw has been my home. I finally achieved my dreams, my goals when I became WWE Champion. I became the face of the brand. I have achieved so much, and Raw feels like home, so I can't imagine not being part of Raw. At the same time, sometimes it's cool to get a fresh coat of paint to get a change of scenery. I debuted on SmackDown in 2007 and re-debuted in 2009 with the “Chosen One” stuff. I have some unfinished business, so realistically I'll be happy wherever.

DAZN: Do you feel like this whole comeback in WWE would be full circle if you did come back on SmackDown?

DM: I really do think that'd be the case. I'm very proud of everything I was able to do on Raw especially being champion at the height of the pandemic and leading the charge but at the same time working hard for everyone else to make sure everybody was entertained during those difficult times and be a leader. But if I did end up on Smackdown for me personally, there is unfinished business, so that could be very interesting. I'm torn right now.

DAZN: The end of Raw was highly discussed with the two good matches with Big E and Bobby (Lashley), and you coming out at the end surprised many people. A lot of people got excited because that's a program people haven't seen, and that's a program I know that has generated a lot of interest. Talking about Big E, how proud are you of him, and what did it mean to you to watch him cash in the Money in the Bank and become the WWE Champion?

DM: I was just like everybody else on planet earth, ecstatic. There's nobody that deserves to be WWE Champion more than Big E. I've watched him come through FCW to NXT to start on the (main) roster as a very serious character which is not the real him to teaming with the New Day guys initially as a serious group and finally shown their personality getting over a huge and paying his dues while being such a nice guy the whole time and finally winning the big one. I was over the moon for him. The whole world is over the moon for him. I just feel really bad that he's champion because I have to take it off of him because I want it back.

DAZN: Is a heel run still something that’s in the back of your mind that you're like, ‘Man, that would be pretty fun’ because you'd have the perfect babyface foil in Big E?

DM: I’m going to go with the flow and see what happens, and the fans will react accordingly. Everything I do, I don't see it as like, ‘I'm a bad guy now’. Whatever my motivation is the fans are going to react accordingly to whatever perhaps I'm feeling at the time. Sometimes they're going to agree. Sometimes they're going to disagree. But I'm always going to do what I feel is right for me. I’ve been around for over 20 years. I'm going to do what feels right for Drew McIntyre. If they cheer, that's cool. If they boo, that's cool. But a program between Drew McIntyre and Big E, that'd be pretty exciting. As Big E likes to say, ‘Two big guys slapping meat is an easy story to sell’.

DM: I have unfinished business in a lot of ways just from a career perspective and things not working out when I was a kid on SmackDown. But at the same time, there's unfinished business there with Roman 100 percent. In WWE, he's the final boss, and I'm excited when the time comes for that story. Maybe it's not right now. Perhaps it's the future. But when it happens, it's going to be big.

DAZN: When you look at the landscape today, is that the biggest money match for you just on a personal and a professional level with Roman Reigns?

DM: Personally and professionally 100 percent. He already was the top dog, the big dog, and now his evolution over the past year, he's operating at a different level. He's been unbelievable as a character in the ring and every aspect, and I want to be able to step up to that level, and I want to be able to put him down. So I'm excited to just like Randy Orton when I won the WWE title; initially, I knew I had to step onto his level as a character in the ring, on the microphone, to prove that I belong at the top of the mountain. Now that I've proved myself, I want to knock that tall guy off the top of the mountain and take his spot, and that's Roman Reigns.