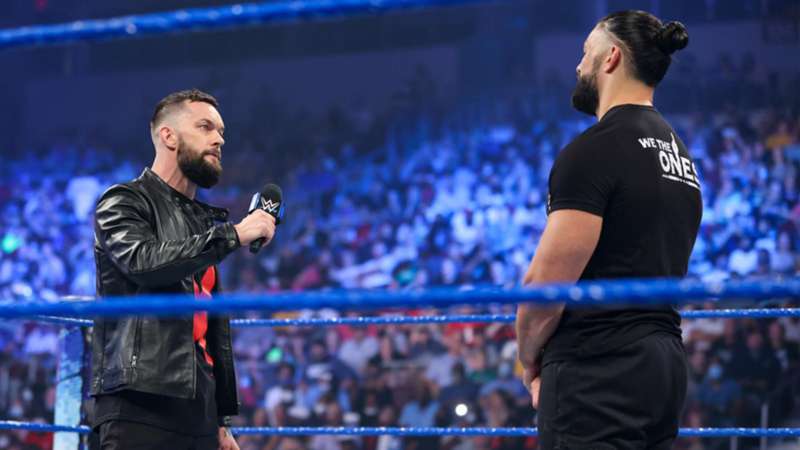 Finn Balor was on top of the wrestling world when he pinned Seth Rollins at Summerslam 2016 to become the first-ever WWE Universal champion. But it came crashing down less than 24 hours later, as Balor had to forfeit the belt due to suffering a shoulder injury during the match.

Since then, Balor became a two-time Intercontinental champion. He went back to NXT in 2019 to where he regained the NXT Heavyweight title in 2020.

The 40-year-old recently returned to the main roster and began a program with Roman Reigns. Now, Balor will get a chance to recapture the Universal title when he challenges Reigns Friday night on SmackDown.

Before he looks to dethrone "The Head of the Table," Balor sat down with DAZN to discuss his evolution since his first match with Reigns in 2016, how Reigns is misunderstood, and returning to his roots from his time in Japan.

DAZN: How would you compare the run in NXT to when you first came into WWE and started in the black and gold brand?

Finn Balor: Completely different in so many ways. I feel like NXT, when I first arrived in the black and gold brand was very much a developmental territory designed to prepare you for Raw and SmackDown. It was very much a feeling in the locker room of us against the world. We wanted to prove ourselves against everyone, and we were NXT, whereas I feel when I returned NXT from my second role that the vibe in the locker room had changed. It was not necessarily a team atmosphere. The brand had grown into its own unique third brand. The competition wasn't with Raw or SmackDown. The competition was among each other and proving who was the best in that locker room. I feel like it made everyone step up their game, especially me because now I'm competing to be the best in the locker room against some of the best performers in the world, be it Adam Cole, Kyle O’Reilly, Pete Dunne, Johnny Gargano, Tommaso Ciampa. All these guys had taken NXT to a level that it wasn't at when I was there on my first run. So it was definitely a very different experience. But it was something that was one of the driving factors in me wanting to return to NXT was that fresh challenge and those fresh matches, those fresh opponents.

DAZN: I remember when you had just come back to the brand, and NXT had come to Chicago for the Takeover: War Games, and you faced Matt Riddle. I remember you walking out. I was sitting there just watching you and your mannerisms and how you were in it. That was the Finn Balor people saw in Japan. You had a good run on the main roster, but it felt like something was just missing and it seemed like when you made that transition back to NXT, it was the Finn Balor that people fell in love with to begin with was back. Is that accurate to say or no?

FB: That's very accurate. I can hold my hands up guilty as charged with trying to please too many people and not please myself. In WWE or working for a machine, whether it's the media department who I'm talking to right now, whether it's the merchandise department, whether it's the talent relations department, there’s all these different people that you need to please. I feel like I was guilty of trying to please too many people and not pleasing myself. So when I took two months off after the SmackDown run in 2019, I really reset and refocused and analyzed what had happened over the last four years because I've never really had a moment to sit down and analyze what had happened. I went from being Prince Devitt in Japan and doing whatever I wanted to transferring to this corporate machine of WWE and trying to adapt as best I could and keep as many people as possible happy, but in the process, diluting what was the reason that got me there in the first place. I really wanted to go back to being true to myself and please myself, first and foremost, and hopefully that the rest will fall into place. I feel like that second run in NXT really helped me recalibrate my character, myself, and my confidence in my own ability and my own choices in the ring. I think it's left me in a much better place than I was two years ago.

DAZN: I saw something on your Twitter page, and you had an interesting picture up of when you first met Roman in the ring in that tournament for the Universal title in 2016 to how you guys look right now. How would you compare your game right now compared to when you first squared off with him in 2016?

FB: In 2016, I was too eager to please. Right now, I don't really care what people think, what people say, or what people want from me. I just want to do what I want to do. I think the real difference in the point where I’m at now my career is that in 2016, I needed WWE. I needed the limelight, and I needed to prove myself on the biggest stage. I feel right now in 2021, no offense, but I don't need WWE. They don't need me, that's for sure. But I don't need them. I'm doing this for me now. I’m performing for myself. I don't care if I have the weight of the world on my shoulders, which I may have had in 2016. That might have been too much pressure, too much stress, or too much for me to fully comprehend. Right now, there's no pressure because I don't need it. I want it. I'm doing this to not prove to anybody else but to prove to myself that this is where I belong.

DAZN: How do you look at Roman’s game now, and what do you make of his evolution? Because you look at what happened when you guys faced off in 2016, and you beat them to go on to beat Seth (Rollins) to win the Universal title, and you look at how Roman’s evolved. It took Roman another four years to finally get to where many thought he would eventually be.

FB: People keep saying it took Roman awhile to get to where he's at. But when we locked up in 2016, people were talking shit about Roman all the time online, in the media, everywhere. When I locked up with him in 2016, I realized that everyone was wrong. My eyes were open. When you're in the ring, and you feel someone, you feel that energy in that first lockup. There's nowhere to hide. That energy, he had it in 2016, and he's had it ever since. Maybe people weren't, you know, on the same wavelength to quite fully tune into that and understand that, recognize that, acknowledge it if you want to say. But for the last year, I think people are a little bit late to the party, because Roman for me, has been someone who's been performing at this level for years and years.

He's the real deal. It may have taken a lot of time for the media or the fans to realize that, but I think his peers, the boys in the locker room, have been well aware of this for a very long time.

DAZN: What would it mean to you once again wear the Universal title and quite arguably be the top dog per se in WWE?

FB: Look, I wasn't born into this business. I'm not from a wrestling family. I come from a family of railroad workers. I had to work for everything that I got in this business. I'm sure it would be incredible to be champion again. Probably, most importantly, to answer the question that I've been asked for the last five years, what would have happened if you never got hurt in 2016?

There's a million reasons why I need to fight. I need to win. I don't necessarily need to be champion. I've been champion before, even if it was only for a day. The idea of a kid from Bray County, Wicklow, a country where there's no wrestling, being 5-11, sub-six feet tall, being the first Universal champion. That idea is too far-fetched for anyone to believe it, especially in this business. I don't need to be champion. I don't need to have a great title run. I need to perform because that's what I love to do.