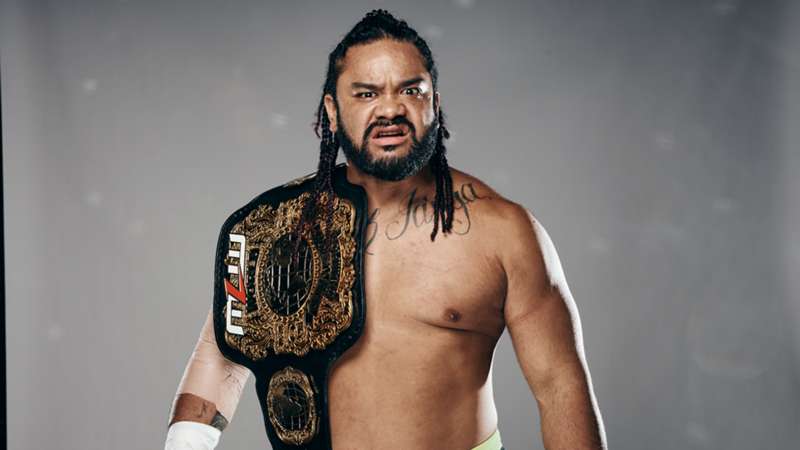 A big-time main event is set for MLW's first episode back.

Major League Wrestling returns to action on Wednesday, Nov. 18, live on beIN and on demand on DAZN, with the first episode of "The Restart".

The main event feature is a first-time-ever matchup as Jacob Fatu defends the MLW world heavyweight championship against Davey Boy Smith Jr., DAZN News has confirmed. Smith will be returning to action for the first time since having his back broken at the hands of CONTRA on May 9.

To discuss the maruqee matchup, MLW CEO Court Bauer took a few minutes to chat with DAZN News about the makings of the match, how good Fatu and Smith are and what pro wrestling can expect from the company for the remainder of 2020.

DAZN News: Always great to talk with you, Court. The reason we're talking today is the breaking news of Jacob Fatu defending the MLW heavyweight championship against Davey Boy Smith Jr. in the main event of the first episode of The Restart, which streams Nov. 18 on DAZN. (Editor's note: The restart airs live on beIN and then is available afterward on demand on DAZN.) Why make this matchup for the main event for the first episode of The Restart?

Court Bauer: This title fight was set to headline our July PPV this past summer, which would’ve been in Philly. When the pandemic hit, all of our matchmaking went out the window, but what stayed was the appetite for this big fight. The fans wanted it. Fatu and DBS wanted it. I wanted to go big and conceptually deliver a premium level event for free for The Restart. This isn’t a match that’s ever been done before, so what bigger main event can you kick things off with than this?

Bauer: Styles make fights, and this one is the perfect matchup. Davey Boy Smith Jr.’s precision as a catch wrestler is untouchable. Add in his freakish strength, dexterity, pedigree, experience and size and you have a complete beast. DBS is an exceptional athlete and has that rare killer instinct you just don’t see every day. Of course, he’s facing a guy who matches up perfectly in Fatu. Fatu has speed, durability, explosive power and a fearless agility you don’t see in any sport. Fatu will hit the top rope and pop off something onto an opponent that defies gravity. There’s a reason no one has come close to taking that world heavyweight title from Jacob Fatu since he won it a year and a half ago.

DN: Many people in pro wrestling feel Fatu is going to be a really big deal. In your mind, is Fatu the future of the wrestling business?

Bauer: Is going to be a big deal? He IS a big deal. Everyone not aware of who Jacob Fatu is, isn’t watching the sport carefully enough.

DN: How exciting of a time is this for the company to be returning and airing new shows?

Bauer: It’s good to be back! Seven months felt like forever. The energy and excitement has been great. The fan support has exceeded my expectations. We’re returning with our biggest and best roster todate. There are going to be almost 40 athletes on the active roster.  Guys like Lio Rush, who is a stud, instantly gives me several big matches I can do. You’ll also see New Japan and AAA have a presence as a part of The Restart. This is a new breed of fighting athletes in MLW.

DN: What has been the toughest thing for you as a promoter in being able to get the company back up and running during the COVID-19 pandemic?

Bauer: There’s ring rust and there’s operational rust. When we revved up the machine, we initially felt that rust but quickly were moving at 100 miles per hour. We have a damn good crew, so it was a relative quick process. However, we never really were inactive. My goal was to take this downtime and shift my bandwidth to ensuring MLW came out of this roaring. That meant ensuring our core guys remained our core guys.  We did new deals for Fatu, Hammerstone, Salina, Holliday and a few others that haven’t been yet announced. It was a win/win as in this moment of uncertainty we were able to offer significant raises to these guys. We then closed licensing deals, like NERDS Clothing, expanded our international footprint with new rights deals and of course, partnered with DAZN, which is a game changer for us.

DN: Now that MLW is back in the saddle, what can the fans expect in the opening episode of The Restart and for the remainder of 2020?

Bauer: I’m going to stack that fight card. We’re going to add another title bout, maybe two. We’ve upgraded our production and one of the things I really like about The Restart is we’re bringing wrestling back to that smoke-filled arena vibe. There’s a raw, primal feeling when you have that hazy look and two guys are going to war in the ring. It’s cinematic. It draws you into the action more. Visually it adds a layer of authenticity that a sterile, over-produced, over-lit arena that looks like a Times Square can’t touch.

As for the remainder of 2020: it’s all about the Opera Cup. This will be a big tentpole annual event for us. It’s a privilege to be entrusted with hosting and promoting the grand tournament, which dates back over 100 years. There’s a lot of history in that cup. Literally. It was made in 1915. We had it restored last year by the same folks that handle the Stanley Cup. It’s a true piece of history in the making every year when we roll it out for the tournament.