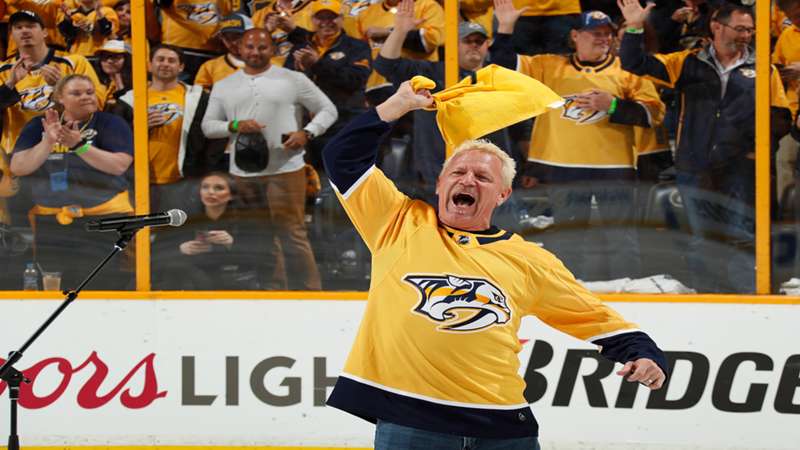 The former WCW and NWA heavyweight champion and pro wrestling legend talks with DAZN News before the debut of his podcast.

Jeff Jarrett has just about done it all in professional wrestling.

After WWE bought WCW in March 2001, Jarrett and his father, Jerry, formed NWA Total Nonstop Action (TNA) in June. Jarrett became a six-time NWA heavyweight champion and got inducted into the TNA Hall of Fame in 2015.

The next step in Jarrett's legendary career is a route he resisted for a long time, a podcaster. Starting on Tuesday, Jarrett will debut a podcast titled "My World With Jeff Jarrett" with renowned podcast host Conrad Thompson.

Ahead of the inaugural episode, Jarrett talks with DAZN News about why he decided to finally get into the podcast space, the 1999 No Mercy controversy.

DAZN: We chatted right before Starrcast in 2019 in Chicago. I asked you then about Conrad's comments about a podcast, and you told me not interested, not a chance. Little less than two years later, Jeff, we're here talking about “My World” debuting May 4. What changed?

Jeff Jarrett: Being a third-generation promoter, I've never been interested in looking in the rearview mirror as a promoter or even a wrestler. You're only as good as your last match, and whatever you did, good or bad in your past, learn from it, and get better tomorrow and look toward the future — but coming through and who would have dreamed two years ago that when we had our conversation neither one of us could have ever imagined, or no one could have that we will be having a world pandemic and shut down and locked down.

That opened my eyes obviously to a lot of different things. But one of them was just sort of the nature of on-demand entertainment, with streaming and Netflix and Hulu, and of course, YouTube and all that's been around. I've traveled for 35 years. A buddy of mine did a little tracking and said, when's the last time this is like day 30, 40, or day 50 of the pandemic? When's the last time you've been in town this long, consecutively? We went back to my high school days. I've always traveled. I've never really stayed home for a month. I think we counted right around the three-week mark. Always traveling. So staying home and just looking at life a little different was one thing.

Conrad's been persistent from day one. When Bruce and him launched in 2017, and brought Bruce on board, and started “Something to Wrestle With”, he was soft-pitching me, then Conrad started Starrcast. He's been persistent. But then another thing, and you'll be able to relate to this. I don't even have to ask if you watched it because I know you did, but when I watched “The Last Dance with (Michael) Jordan, and he sat there with that laptop in his lap, and when to watch some archival footage and see the emotion. I'm a basketball junkie. I'm a huge basketball fan, played college basketball. How emotional he got, which made me get (emotional). I couldn't wait to watch the next episode. It was so good. It began to open my eyes. The format Conrad has intrigues me. It's not guest-driven. It's event-driven.

DAZN: You got that beautiful (WWE) Intercontinental title to the right of you. There have been plenty of great designs of that belt. What’s your favorite one?

JJ: I would like to have an IC title with the white leather. That was the Double J one. But that look, when I look at it, reminds me of Curt Henning. It reminds me of “Macho Man” Randy Savage, a Bret Hart, Shawn Michaels, Scott Hall. That generation because obviously, I wore that IC title in 1998-1999. It changed, so that to me is the classic model. Because you know, I can you remember so vividly that Randy Savage lost a loser-leaves town (match) in Memphis and went up to the WWF at that time. He's up there, and then for you know it, he's the IC champ. So as a fan, which I was long before as a promoter, a wrestler, and as a fan, and I'm still a fan today, that version right there to me sort of solidifies the classic IC strap.

DAZN: How do you not annoyed when people bring up everything that happened at No Mercy 1999 in terms of demanding all of the money you were owed and everything else before heading to WCW?

JJ: Am I tired of it? No, because, you know, 20 years later, 21 years later, people still want to talk about that. They want to talk about me getting fired on Nitro. They want to talk about what happened on TNA episode four. All this different kind of stuff. That's really what I'm excited about because of Conrad's cadence. He doesn't mind rolling up his sleeves and doing his homework, and understanding the whole context of everything that goes around the event. So that's all on him. And my job is going to be to Okay, here's this, here's this story. Here's the story and our thought about how it came together.

DAZN: What's it mean to you the fact that one of the biggest parts of your legacy good, better, and different is the guitar shots, and people can take one piece of nostalgia and still talk about it with you to this day?

JJ: I'm from Nashville. When you have different artists that have had 20 or 30 No. 1 hits and a piece of work over here that was some of the best, and they had a tour they co-headlined with this artist. But you have a reporter that comes up, says ‘Hey, remember when you did that little jingle for this deal’? It's really a small part, but to the complete fan base, me swinging guitar shots obviously became a very integral part of it.

I'm a promoter. I'm a wrestler. I'm an IC champ. I'm a world champ. I'm an NWA champ. All the guitar shots people love to talk about them because, in my opinion, humbly, my opinion, I don't think there's a wrestling fan out there that doesn't have a brother, a sister, a cousin, a grandfather, a boss, a co-worker, that they were like, ‘I'd love to take a guitar and smack the hell out of this person’. They can live vicariously through me in a lot of ways. And that's a big part of our industry of emotionally connecting with everybody.

DAZN: You got the belts back there. Which one means the most to you and why?

JJ: There's no way for me to favor one more than the other. One of the titles that I will always hold near and dear to my gut, in a lot of ways, is the X-Division title. That was the division we created, and there were lots of negative stuff behind the scenes early. What are you doing? These guys were quote, unquote, flip-flop flying. It doesn't make any sense. I'm like, ‘No, my friend. That's what you're missing’. With the X-Division, we said it's not about weight limits. It's about no limits. So the creation of the X-Division is a belt that I used to really take a lot of pride when I'd see Samoa Joe, who's a heavyweight quote, unquote, or AJ Styles, who moved into heavyweight status, or Christopher Daniels, who may be a tag wrestler.

The NWA title, my dad's favorite belt by far. Dory Funk, Jr. was his favorite champion. We talked a little bit about the IC title and the “Macho Man,” and that lineage goes through that to Tito (Santana) and Pedro (Morales). Then the big gold (belt), it goes without saying (Ric) Flair is so synonymous with the big gold belt. From a personal point of view is the Mega championship of AAA. I’m the longest reigning non-Mexican wrestlers to ever hold that belt. I take a lot of pride in my run down there. They all have different elements on an emotional connection to me.