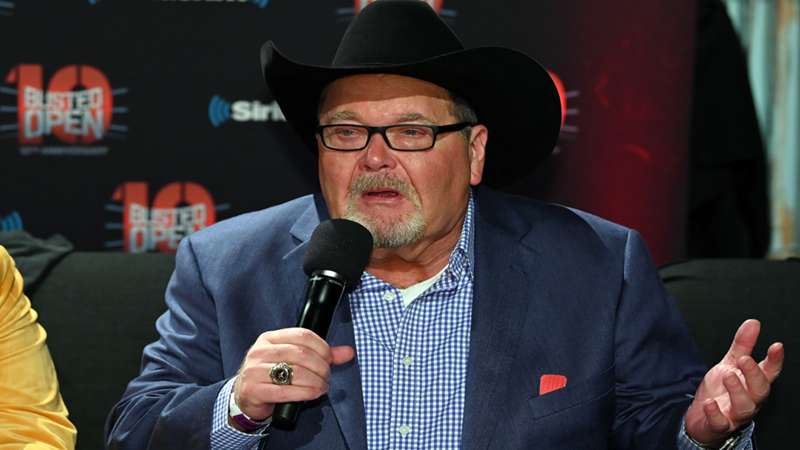 The legendary voice of pro wrestling sees a light to the end of his historic career.

Jim Ross is viewed by most pro wrestling fans as the greatest announcer of all-time. Ross is known as the play-by-play voice of the NWA, WCW, WWE and, currently, AEW.

Sitting behind the desk every Wednesday night on AEW Dynamite isn't the only hat Ross wears.

Ross has a hit podcast, Grilling JR, that comes out every Thursday, and also a successful barbeque business. This month, Ross dug into his archives and had old episodes of his previous pro wrestling radio show, Wrestling with Jim Ross, redone and on AdFreeShows.com.

⏮ Rewind to the 90s tomorrow as ⁦@JRsBBQ⁩ is joined by Paul E. Dangerously and Ravishing Rick Rude for the next installment of #StudioSessions! 📻

Get this and tons of other bonus content exclusively at https://t.co/5v6Q3sv3sk 💻 pic.twitter.com/65DAHJ82xu

Ross took time to speak with DAZN News about bringing back the old episodes, AEW returning to live events and how much longer he is going to be commentating.

DAZN: I got to ask you as I asked Tony Khan this a couple of weeks ago? How do you find time to do the podcast, projects associated with the podcast, and commentate for AEW?

Jim Ross: The old saying, Steven, is that if you love what you do, you never work a day in your life. I have that attitude even at this stage of the game. I'm 69 years old. I'm having as much fun as I've ever had in wrestling. I love what I do. It's not a drudgery to embrace that. I look forward to getting up. I look forward to staying busy and being productive. You get to this age with all the negativity sometimes on social media, you sometimes you begin to doubt yourself. So, after enduring three bouts of Bell's Palsy and the fact that I don't smile and not on purpose, I'm always in the I got to prove myself again mode. It will be that way Wednesday night (on AEW Dynamite). I'm going to go out there like it'll be my last show. I want to work my tail off to make it good. But I enjoy what I do.

I'm surrounded by good people. You got to have a good staff around you, good assets, and resources. We have that here. My podcast family with Conrad Thompson. He's got a huge staff. It's grown amazingly, so Connie's people are always at my beck and call. It sounds egocentric. I don't mean it that way. But they're there to help. Then you got Tony's group. Tony lets me roll. I rarely hear from him during the broadcast. Occasionally yeah, but generally not much. He lets us work on our instincts. We know the direction we're traveling. We all know we're trying to get to the same destination. It gives us a creative freedom to make that journey, and we're sitting behind the wheel. We're not in the backseat following along with somebody else. I just love what I do Steven. I enjoy it. And until the day gets old, and I have trouble getting out of bed, and I don't want to go to work, and I don't see that anywhere in sight, but that's what I'm going to do.

DAZN: AEW announced they are going back on the road starting July 7 in Miami and then the 14th and the 21st, you guys will be in the state of Texas. As a broadcaster Jim, how's it going to feel for you on a broadcasting level to have that roaring crowd back?

JR: There's nothing like it. I can't give you another aspect of what I do that's more important. The enthusiasm that we garner from the live audience and the ability that they let us ride with their adrenaline to enhance our own is priceless, quite frankly. So for me, it's an additional motivator. I think for our young talents, even though veteran talents like a (Chris) Jericho or Dustin Rhodes, or some of those guys have been around a while, it motivates them too. It never gets old. Years ago, when I signed Dwayne Johnson and we have always remained in touch and so forth, but he'll tell you that nothing replicates his feeling when performing before a live audience. He's on a soundstage. He's in a take, redo, let's try another one. They're still trying another one here. You got no net, and here you go. So I think that for our talents to experience that and feed off that, it's going to raise their performance level.

JR: The thing about it Steven is that I was doing Atlanta Falcons football for WSB in addition to doing the wrestling on TBS, and I got to develop a nice relationship with decision-makers at the radio station. They were fans of my work on wrestling, and we became buddies. We communicated, so I said I got an idea for you, 'What do you air Sunday nights at nine o'clock'? It was nothing to speak of. It was like a public service hour or something this hodgepodge, and it followed during football season the Georgia Football Coach's Show. That was on at eight o'clock. So at nine o'clock, they pretty well shut their doors. We already had a producer there and a board-op. I didn't need a producer to tell me what to say or whatever that little screens there to tell you who was on the line, and you could take the call.

I had access to all these guests. For the longest time, it was guests that I got from WCW. Okay. Then when I started my transition in (19)93, from WCW go to work for WWE before WrestleMania 9, I started having guests on there. I had Vince McMahon, Bobby Heenan, Randy Savage, and on and on and on. That was thanks to Vince. He got them on there. We promoted TVs and pay-per-views. It worked out real well. But here's the deal, Steven. Those shows only aired once. They never went into rerun. So they were heard once. If you missed it, you snooze, you lose. There was no internet. There was no streaming.

So I thought these are really diamonds. These are lost gems that we should be able to rediscover. So my friend Dennis Brent, who I worked with in Atlanta and WWE in Connecticut, with he and his wife, Lynn. She was one of my top assistants for both companies. I always felt kind of undermanned because she's really smart. But Dennis recorded all those shows, every episode. So I told Conrad, and I said we should talk to Dennis about this. But Dennis has been battling multiple sclerosis, and his health is sketchy in battling that damn thing. He finally got the energy and felt like finding these tapes. So Conrad made the deal. We got access to the tapes, and they've done whatever they have to do technically to make them sound better. It wasn't like I did them on a makeshift audio system. They're done at a radio station, so it's pretty good clarity. I thought with knowing how the Ad-Free Network has been constructed with all these new features, and you got all these different guys with their podcast. Jeff Jarrett's podcast was just added. Kurt Angle's podcast is fairly new. You got Arn (Anderson) and Bruce Prichard, and of course, Tony Schiavone, and then my podcast comes out on Thursdays.

I'm thinking we're always looking for new content for the Ad-Free side of this equation. So we worked out our deal. Then about a week ago, we dropped our first show and is getting very positive feedback. We haven't had a big, massive media rollout. But I think if you're a wrestling fan of that era, are a fan in general like yourself, and you still have an interest in the history of the business, and these shows are an hour long. This isn't a three-hour podcast. They're an hour. They got all these guys. It's their original voices. They're all in character. They didn't all want to be, but you could tell sometimes what was on their mind. You can read between the lines. I think it's a great find for us, and it's a quick listen. Some of these guys, they're not with us anymore. I'd love to be able to say, yeah, I'm going to have Bobby Heenan on the podcast next week. Can't do it. Bob is no longer with us. So I think for fans of those guys in various areas, you're going to love the heck out of it.

DAZN: How much longer do you want to do everything? Like you said earlier, you're 69, and the fire still burns every single day, seven days a week, 365 days a year. But do you see a light at the end of the tunnel?

JR: I do. You have to. Like, yeah, I'm not John Wayne where I can take an arrow by the stick and pull it out of my own arm or something. We all got a shelf life. I started my third year with AEW recently. I don't really pay a lot of attention to that stuff. You're having fun. You're not thinking about it.

I hope that in a perfect world, I would like to stay working for Tony Khan and AEW and take it a year at a time. The contract I came in here was three years because that's what he (Khan) wanted. He wants stability. It made Time Warner happy because they're used to my work in their company for many years and the WWE stuff as well. I'd like to, in a perfect world, Steven, I would say I'll do this year, and then let's evaluate and see where we are health-wise, motivational-wise. Then if I come back, I'd like to come back for a year at a time. That way, it doesn't put Tony in any unnecessary stress. Because by the time my contract ends, I'll be 70. So some young dude like you that's 40 is going to be like 'Jesus Christ, he's old, dude'. But I'm having fun doing this. I'm not going to work every day. We do four shows a month. I'm required to be somewhere four times a month. It's not bad. I'm not complaining. It's just a matter of getting back in that travel groove. I'm a good packer. I have this saying, 'I don't have any room in my carry-on for negativity.' But I think a year at this stage of my life to be realistic and not be egocentric, a year at a time is smart money for me.