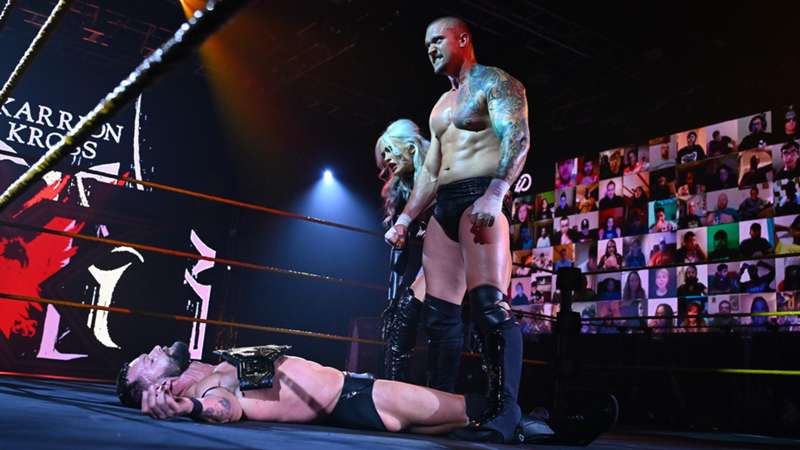 The former NXT heavyweight champion talks with DAZN News ahead of his chance to regain the belt against Finn Balor on Night 2 of NXT Takeover: Stand and Deliver.

The world was Karrion Kross' oyster when he debuted in WWE as part of the NXT brand this past April.

Less than four months later, Kross made his return and started his quest to regain the belt he never lost inside the ring.

The journey to becoming a two-time heavyweight champion comes to a head when he meets current titlist Finn Balor in the main event in Night 2 of NXT Takeover: Stand and Deliver on Thursday, April 8.

I will crash this current TIMELINE,

So we may enter the N e ❌ T .#TickTock ⏳#WWENXT @peacockTV @WWENetwork pic.twitter.com/1ZbMdj97fO

Ahead of the matchup, Kross talks with DAZN News about the shoulder injury, getting the monster push, and what it would mean to beat Balor for the championship.

DAZN News: I want to start this way. Demolition Man.

Karrion Kross: What about it?

DN: One of the greatest movies of all time?

KK: Now. Careful. Be careful where you go with this. Okay. Lay it on me. Go ahead.

KK: He (Snipes) stole the show. Let's just admit that right off the bat. He did. But that's one of the best parts about it. At least we can agree on that.

DN: One of the cool things I think the company is doing right now is the PSA in regards to COVID and make sure you're getting vaccinated. Can you talk about the PSA WWE is doing doing right now in terms of making sure people are getting their vaccinations for COVID-19?

KK: It's extremely important to all of us that people have the opportunity to go out and have the option to do that. We all want to get back to normal. This seems like the best bet, right?

DN: We can all say 2020 was a dumpster fire. But 2020 was starting out so great for you. You look at what you did and what you were doing. You took the WWE Universe by storm and you become the NXT champion. Then you come out a couple days later and you have to give up the title. You're going through that match with Keith and when did you know when it was like, ‘Oh, gosh, something's really wrong here. Let's just get through this match in hopefully, it's not worse for the wear’?

KK: Right when that happened. Time kind of slowed down. I feel like that happens to a lot of people that wind up going through some sort of physically traumatizing injury like a car accident. My first immediate reaction was I was really aggravated. I got really aggravated because I can't believe that just happened right now. I can't believe that just happened. A lot of people see my rise in NXT as very quickly, but they don't understand. They don't take into consideration that I've been at this for many years. So just to get that one match for the NXT title took me years and years and years. All the miles I traveled going all around the world, inadvertently missing the birth of my friends' kids, funerals, weddings. My whole life for years, every single day went into getting that one single match at Takeover 30 and getting in the ring, and that happens. As soon as I landed, it just didn't feel right. I grabbed it, and I felt like something was out. I was like, ‘Oh, something's out’. I was like, I hope that in my mind that they didn't see that. I'm gonna try to push it back in. I tried to shove it back in. You can see me doing it. It’s not going back in.

I just remember the ref asked me, ‘Are you okay’? I was like, ‘Ah, yeah’. There's no way in my mind that they might even stop it but there's no way. I had a lot of stuff go through my head. In just a few seconds, one of my biggest inspirations to me for any sort of hardship I've ever gone through in my life is my grandfather. He had a long battle with cancer and seeing him fight through that gave me and my entire family a lot of strength. Literally anytime I've ever had to deal with anything really serious in my life, I've always thought back to him and how he persevered through that. At that moment, he was on my mind believe it or not. It's crazy. I can't explain it. I was like, ‘You know what, pop would tell me I could do this’. That was it. Everything that happened right after that, that injury in the match, I was just like I'm just going to accept whatever my body is going to be like by the end of this match. I'm going to get through this. I'm going to go through this. We're staying the course on this. This is important to me. This is my life's work happening right now. I'm going to do this to the best of my ability. That was a wild night, man. Let me tell you.

DN: You came right in and got put in a very prominent position pretty quickly. Not many guys get where you're at this quick. You think of (Brock) Lesnar. You think of (Kurt) Angle. What does it mean on a personal level that the company sees something in you to where you're getting pushed like those gentlemen?

KK: It feels really good. It's also a very strong motivating factor. With that push, and everyone can see it, let's just call it what it is, there comes a great amount of accountability. People need to acknowledge that when they are afforded these sort of situations and positions to showcase what you're able to do. The accountability is real. It's very serious. I take it very seriously every single day that I get up in the morning. My life is preparing for Wednesday every day. I love that. I'm a very militant structure person. I enjoy productive, efficient routines. To be able to get up every day for a living and prepare for Wednesday, and sometimes Sunday, that's my thing.

KK: For starters, I don't pay any attention to that. But for the sake of entertaining the notion, first of all, I got really thick skin except when you start trashing Demolition Man. Bro, don't think I forgot. Okay, first of all, it's on my mind. I approach it from two different things, two different ways. Number one, everybody wants to see you do well until they feel like you're doing better than they'd like you to do. That's  life in general. On that notion, people always say they want change. People like to see change and all things, right? But they want to see change on their terms. Too bad. Look at it like this. This is a success story if you really think about it. If you remove me from it and just look at a person not Karrion Kross. A person coming in and finding success like this. This can happen to other people.

I feel like my story right now is a success over the status quo. People don't like status quo. They don't like it. If you think about it like that, I am the change that people are always asking for. I am the change that people are always looking for. People want to see things get shaken up immediately. If you look at it and observe like that, that's exactly what I'm doing. The other thing I would tell them, ‘Hey, if you're not sold on me, keep watching because I've heard that before’. I have a lot of fans right now that are diehard fans of mine that weren't big on me to begin with. Know at the end of the day, everything that I do is in the interest of entertaining you. So eventually, I'll get you. Believe me.

DN: What would it mean to Karrion Kross to beat Finn Balor in the main event of Night 2 at NXT TakeOver: Stand and Deliver?

KK: It would be an event symbolic of coming completely full circle to getting knocked off the path and getting back on track to where we're supposed to be. Every single thing that's happened to me, every single thing that's happened in my career, it comes full circle. It means something to get that belt back and defend it in a manner in which I was supposed to. It will mean everything.