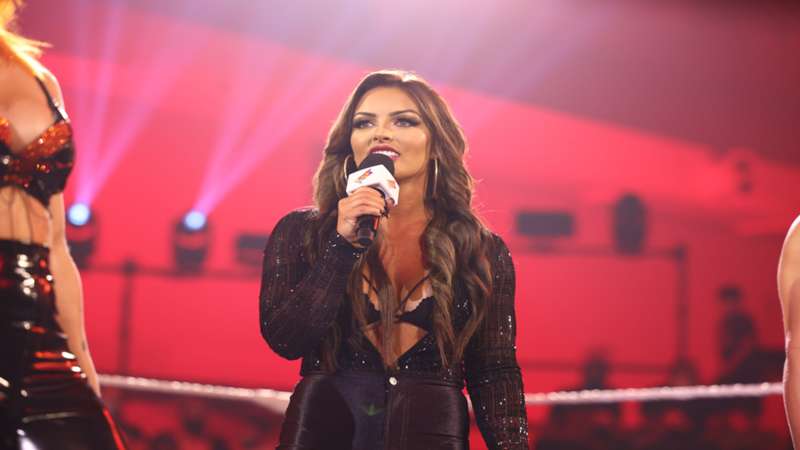 Exclusive interview: Mandy Rose 2.0 has returned to her roots.

Sometimes you need to return to your roots to find yourself. A good example of that is Mandy Rose.

Rose signed with WWE after appearing on the sixth installment of Tough Enough in 2015, where she finished second on the show. She went to NXT for a two-year stint before moving up to the main roster and debuting on Raw in November 2017.

For over three-and-half years, "The Golden Goddess" was paired and feuded with Sonya Deville and recently Dana Brooke. Then in a surprising move to wrestling fans, Rose made her return to NXT in July.

Now, Rose is the leader of Toxic Attraction with Gigi Dolin and Jacy Jayne.

On Tuesday's edition of NXT 2.0, Rose will be alongside Dolin and Jayne as they will challenge NXT Women's Tag Team champions Io Shirai and Zoey Stark.

Tonight, The #WWENXT Women's Division is on display with THREE matches at 8/7c on @USA_Network!

Before the title match, Rose sat down with DAZN to talk about her experience at this past weekend's Ryder Cup, the stigma she's had to overcome in WWE, and the confidence she's gained her return to NXT.

DAZN: You got to be involved in a once-in-a-lifetime event last week. How did you get involved in being involved with the Celebrity Ryder Cup?

Mandy Rose: Honestly, it was the most amazing experience ever. A lot funner than I really anticipated only because I never golfed before in my life. So it was through a connection a friend had asked me if I golf. Originally, I was like, ‘No’. I didn't want to lie or anything. Then they came back, and they were like, ‘Well, it's okay’. Long story short, I made it there and played in the Celebrity Cup. That celebrity tournament was amazing. I’m not going to lie, but actually, I'm not that bad of a golfer. I had a crash course when I got there by Tom Henderson. He's a very amazing coach. I picked up some little pointers real quick, and I got two birdies. I was shocked. I feel like I need to pick up golf because I feel like I'm a little bit of a natural. I'm not going to lie.

DAZN: You went from Raw where you were really gaining some steam, and then you ended up back in NXT. A lot of fans were perplexed and like, ‘What's going on here’? What led to the process of you going from Raw to back to NXT?

MR: Sometimes switching it up is always good. NXT needed a woman like me. Like I said in my promo last week, they needed a mainstream superstar to be able to help some of the women evolve. I don't have the most experience in wrestling compared to some of the women and a lot of the women in all of WWE. But when it comes to mainstream qualities, I have a lot of those. So I feel like why not come and help some of these women, whether it's anything related to WWE, or whether it's the way they dress, the way they look, the way they present themselves, the way they are perceived, the way they speak in interviews, and the list goes on and on. It’s rebranding my character a little bit. I always think it's great to evolve. I think change is always good as well. So I wanted to switch things up a little bit. So I'm having a lot of fun in NXT. It's been a great experience so far. I have a little bit more creative say as well, which is really cool. The whole new brand of NXT 2.0 and Mandy 2.0, it's all coincides. It's just the beginning.

DAZN: I noticed when you cut the promo last week that it seems like you have newfound confidence being back in NXT. Is that wrong to say?

MR: Definitely. Sometimes we evolve in different ways. But sometimes finding new avenues and new ways to present yourself is because I've always been known as the “Golden Goddess and God's Greatest Creation”, and if you think about it, those names are based off of my looks. That's fine. I get it. Coming off Tough Enough, it was all about my looks, but I don't want it to just always be about my looks. I'm tired of that. I'm tired of everyone saying she's just a hot blonde. She's just this and that. I want people to recognize and respect the work I've put in inside and outside the ring. I want it to be made clearer to people and let them show them that, and it sounds kind of silly because it's like, ‘Oh, it's just a hair color change,’ which I'm still beautiful, and I still look hot. I'm not going to lie. I’m actually loving the dark hair, and I think I even look hotter.

DAZN: Did that stigma bother you that you were just you're viewed through one lens and not viewed with a wider scope, or do you just take it with a grain of salt with the premise of just going out there and proving people wrong?

MR: I don't think it bothered me in the beginning so much because, like you just said, trying to prove them wrong. I felt like it was always an uphill battle. I love competition. I love knowing that I need to fight. It lights a fire under my ass. I was very determined to show them because I knew that I could do this. My whole confusion was, why can’t I look this good and fight this good as well? So many women in the past had like Trish Stratus, a perfect example of someone being hot as hell but can kick ass in the room. So it's like, ‘Why can’t I do both’?

So it did bother me. But I think it also lit a fire under my ass just to keep working on myself. I didn't grow up in this business. I didn't have a bunch of years of experience. I'm always working on my in-ring skills and everything else that comes along with it.

DAZN: What made you want to switch the hair color from blonde to brunette? Was it more of a personal decision or a professional decision?

MR: A little bit of both. I love switching it up. I laugh because the last couple of years, I went from blonde, long hair to short. I got my hair cut on national television by my former best friend and former tag team partner (Sonya Deville). Then I went back and kept it blonde and then now brunette, so I feel like I've had a lot of changes with hair. I'm going to keep it this way for a little while. It was definitely my decision. I had the idea to do that. I wanted to switch it up with my character. I wanted to become a little edgier. I thought it made a lot of sense with my group Toxic Attraction, kind of swaying the fans to think that first they probably thought I was going to try to make the girls more like me, but I think they rubbed off on me a little bit. I always say the most successful people in life are always listening, always learning, are always trying to change, so it doesn't matter who you are. If Gigi and JC rubbed off a little bit on me on their edginess and I wanted to become a little edgier, I thought why not and just have a more aggressive side to me and instead be focused on the gloating and be like, ‘It's all about Mandy Rose and “The Golden Goddess,” and I'm still hot’.