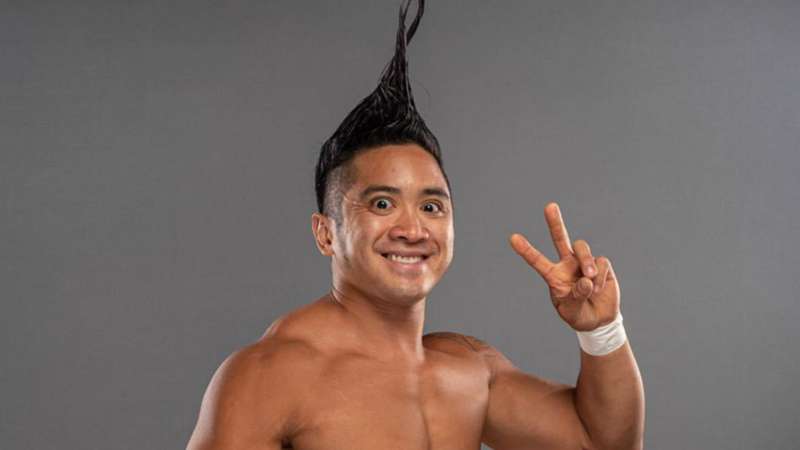 Meet the newest star of Major League Wrestling who you can watch on DAZN with new episodes starting in November.

Recently, it was announced that Major League Wrestling is now airing on DAZN. The promotion will begin recording new episodes in October that will be available on the global streaming service at the beginning of November with exclusive content.

And with MLW's return, the organization has signed prolific Sanshou fighter and kickboxer Bu Ku Dao.

Dao, 31, started his path to MLW in 2012 under the guidance of pro wrestler Luke Hawx in Baton Rouge, La. After honing his craft on the independent circuit, Dao is the latest signee for the growing organization.

Ahead of his MLW debut, Dao discusses why he signed with MLW, being the first Vietnamese-American pro wrestler signed to a major organization, why his parents didn't want him to do pro wrestling and more.

DAZN News: The wrestling world knows about you already, but there are some people out there who don't know much about you yet. And they're going to find out coming up in November on DAZN. Who is Bu Ku Dao?

Bu Ku Dao: Bu Ku Dao is "The Situation". I'm a Vietnamese-American pro wrestler from New Orleans, and I am currently a huge disappointment to my parents.

DN: When you have this conversation with mom and dad, and you're like, "Listen, I'm going to be a professional wrestler". What was their reaction to when you gave them the news?

Dao: They told me to shut up. I had to tell him at 21 years old that I was going to college when I was going to wrestling school and training. I live in Baton Rouge, LA, and I would train at Wildcat Sports, which is like an hour away. I told them I had to go three times a week to go to school to get my doctrine (laughs) to keep a roof over my head, so I don't sleep in my car.

DN: When they find out you're going to be on DAZN for the MLW Restart coming up in November, they're going to be mad, but hopefully, they watch. What was it about pro wrestling that made you go this route? Instead of doing what your parents wanted you to do and take the path of like you said, a doctor, a lawyer, or something along that route?

Dao: I don't want to say I have daddy issues, but I guess it is a rebellion thing. Every Asian parent growing up would make their child go to school and college, and it just seemed very boring to me to do that. It (wrestling) came naturally (to me). I just fell in love the moment I saw it, and I found out my grandparents used to watch it, too. So maybe it's genetics.

DN: What was it about pro wrestling? Is it just the art form? Is it the entertainment aspect? Is it the sports aspect? What aspects of pro wrestling drew you to want to do?

Dao: That is a beautiful question. I love that question. But really, it is all of it because it's wrestling, and to me, it is so subjective. There's room for everything. I think (wrestling) really is an art form, in my opinion. It's a real art form if it's done right. If you train and want to be one of the best in the world, it's an art to me, and it's violence, but the violence is very (much) like music to me.

DN: Is what you just said that drew you to MLW?

Dao: I wanted to go there for so long, for a couple of years I've been talking about (wanting to go there). Even when I got the call, I was excited, but then at the same time, I thought it was a joke. I thought no way they want me, just like my dad and my parents don't want me at home or wrestling. I was like, 'No way these guys want me in Major League Wrestling.' I was so excited and very emotional. I was crying a lot. For them to give me this opportunity, I was just so speechless.

Dao: Yes. You don't want to get your hopes up so much, even though I still prepare for the worst. If you get your hopes up too much, and when they don't happen, and you have that feeling that it's very painful. When you love something so much, and then you think you have a good opportunity, and you're doing it right, and then you get to prove people wrong, your parents wrong, change tradition, inspire people and be whoever you want in America.

DN: A lot of people haven't brought this up, but what exactly happened between you and WWE to where you were no longer with the company?

Dao: Two weeks before, I just got a call, and they said, "Maybe we try next year". They rescinded the contract. I'm still scared if MLW rescinds this contract for me. When it happened, it was like two weeks before I was going to move to Florida, and he just said, "Now's not the time. Maybe try again next year". Then here we are.

Dao: Honestly, it hit me real hard. It took a couple of years to be honest where I woke up, and not a day goes by where you don't want to give up on of the dream or give up on a career that you love so much. I had to grow so that I didn't want to be bitter. If I really wanted to do this, that's just another obstacle. I want to keep doing it and do it better, be better, and prove to them why they made the wrong choice.

DN: How were you when you got the news that you would be coming to MLW because you were going to go to a place that ended up not wanting you to now a place where you're really wanted?

Dao: I told him (CEO Court Bauer,) I was just the happiest man alive. Everything just felt so right when they called me. I still can't believe it because, after everything that happened, I'm still in disbelief.

DN: What does that mean to you that you're becoming a trendsetter for something that's never been done for Vietnamese Americans and wrestling for a major pro wrestling organization?

Dao: It's a new motivation for me because I really do want to inspire more Vietnamese wrestlers, more people. I see it growing over there in Vietnam. I want to help them grow. I want them to take notice, too. If you're from here and you're Vietnamese, I still want you to believe because I don't think there's enough representation in the business, especially the Vietnamese and the culture that's coming out right now.

DN: A topic that has been discussed in the pro wrestling circles is that you are a little over 5 feet tall, and that's not the prototypical height for a talent. What do you say to people that say "Oh, he's too short to be a pro wrestler"? Is that just another thing you use as motivation because now you're starting to see more guys at that height and become big stars?

Dao: Absolutely. I think I think big and tall wrestlers are killing the business. Just kidding. But I do believe it is an advantage for me, in my opinion. I don't think I'm short until I see pictures of me with other people. I'm like, "Oh, that's how I am, OK." Everything I view the same as me. I look at everybody at the same level for some reason. That's how my brain works.

DN: What can fans expect from Bu Ku Dao when we see you on DAZN starting in November?

Dao: You can expect me to be Bu Ku Dao, the craziest Vietnamese wrestler you'll ever see. When you watch, and you'll see me kick ass, get my ass kicked, but still kick ass and whoop everybody on the MLW roster.