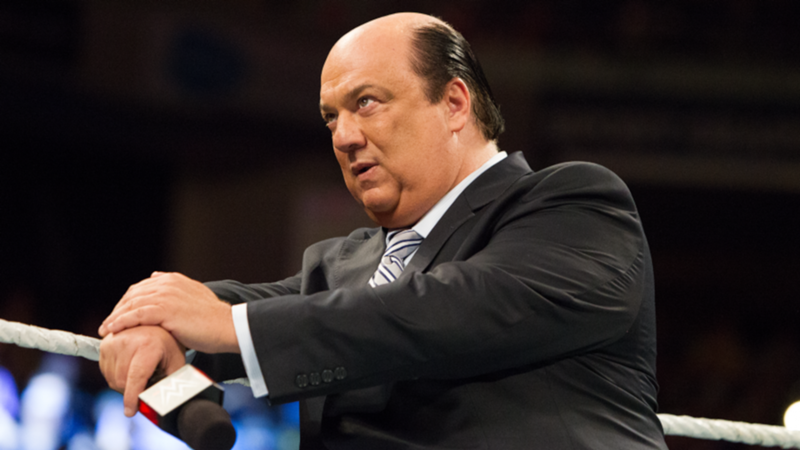 Paul Heyman has managed some of the biggest names in pro wrestling history.

Currently, the native of New York leads perhaps the biggest name of them as he's the Special Counsel to The Tribal Chief, the WWE Universal Champion, Roman Reigns.

Ahead of the "Go Big" edition of Friday Night Smackdown, the former owner of ECW talks with DAZN News about the partnership with Reigns, where Reigns ranks among the greats of WWE, and the possibility of seeing Reigns and Lesnar locking horns one more time.

DAZN: You look at where Smackdown's at ever since you aligned with Roman (Reigns). Since you guys aligned together, the shows have been on another level. It's the best show right now in all of WWE, the best show in all of wrestling. What is it about you and Roman together? You had that magic with Brock (Lesnar), with (CM) Punk. It seems like you with Roman Reigns are just right now on a completely different level.

Paul Heyman: I had the run of a lifetime with Brock Lesnar. What we accomplished in our eight years since we returned in 2012, let alone what we accomplished in the 18 years since 2002 — and that includes writing a book together that includes Brock's run in UFC. Many would make the valid claim what would be impossible to top: A near 600-day run as champion, multiple world titles, and the single biggest victory in the history of WWE, which was Brock Lesnar conquering The Undertaker's undefeated streak at WrestleMania 30. To top that, to compete with that, to follow that is an impossible task. Can't be done. But that's the goal. That's the vision of where we want to take Roman Reigns.

That was the only thing that could put me back in front of the camera after my run with Brock Lesnar. Because to me, if I'm not with someone driven by the ambition of accomplishing the impossible, then it was time to call it a day. But that's Roman Reigns. Roman Reigns wants to top everything he's done since he debuted on the main roster. Roman Reigns wants to accomplish and top everything that was done by Bruno Sammartino, Hulk Hogan, "Stone Cold" Steve Austin, The Rock, Triple H, Shawn Michaels, The Undertaker, Ric Flair. Combine them all, stack them high. Roman Reigns wants to go to a level all of them together could not, cannot achieve. That's the goal every single solitary micro-moment you see him on camera. That's a level of ambition that I strive for as well. It's an honor, a privilege, and a pleasure to collaborate with such a vision.

PH: I think you're seeing it every Friday on SmackDown. If you take a look at the evolution of the persona since he returned at the end of August, and you watch how at the beginning, every word was intentional. Every movement has a purpose during his promos, in that we were starting to reveal the dynamic of who this actual human being is. Then as we got into the rivalry with Jey Uso and you started to understand he's not just the Tribal Chief, he's the Head of the Table and why he is The Head of the Table. The explanation of how he feeds not just his own immediate family, how he is responsible for the entire Anoai/Fatu Dynasty, how he takes care of everybody, how everyone relies on him. What that pressure, indeed that burden must be on a man and how the championship is a must, not just a prop. Not just something for me or him to hold. Not just the token that is demonstrative of being the main event, the top attraction in the promotion, but how it is a tool by which he can demonstrate to the world that he is the WrestleMania main event, the champion, the attraction in all of WWE and sports entertainment. Then as we got into the Kevin Owens situation, and you start to see the sheer savagery of his ambition and why that ambition plays out into the psyche and how it plays out into the psyche of the persona, the character, and the man known as Roman Reigns.

Then you get to the WrestleMania (38) main event, and he's against Edge, who's a Hall of Famer, (then) Daniel Bryan, who's a first-ballot Hall of Famer. The fact that he then not only defeats them both, but he stacks them in the most declarative, dominant pinfall in the history of WrestleMania main events. Every moment that you see Roman Reigns on television, you are witnessing a character and persona, and a human being accomplish that vision of going to a level never achieved by Sammartino, Hogan, Austin, Rock, Triple H, Shawn Michaels, John Cena, Ric Flair, etc. You're witnessing it every single time. You're not only seeing another layer evolve. You're seeing another layer get pulled back at the very same time. The strength from which he demonstrates this greatness is at the very same time and quite compelling and riveting, a very vulnerable moment because he's revealing another side of himself to the public. That is authentic. That is genuine. That is really himself, the human being, and it's fascinating to watch.

DAZN: It seems like the direction right now coming from the end of SmackDown last week was Roman and Cesaro.  Cesaro has been on a great run this year. You had a run with him in the past when he won the Andre the Giant Memorial Battle Royal. Can you talk about Cesaro's evolution from that moment to right now?

By having Cesaro, I had an excuse to be on television. So that was Cesaro's role. Cesaro was a supporting player in the ongoing saga between Brock Lesnar and The Undertaker. That's unfortunate for Cesaro. But in terms of big box office, that was his role. Now years later, Cesaro is ready for a title run. While I love having him on SmackDown and can't imagine what Raw could offer Smackdown in terms of a trade, Cesaro's only hope of being the champion of a brand is to go to Raw because he's not taking a title away from Roman Reigns. He's just not. It's not going to happen. Now, Cesaro wants to set his sights on the Intercontinental title, and I happen to like the champion Apollo Crews. Cesaro has a fighting chance there. That's an interesting matchup. But there's no one that's at Roman Reigns' level right now. No one.

DAZN: You said something right at the end that I felt (was) very intriguing. No one (is) on his level. I'll pose a guy you know very well. (He's) from the University of Minnesota. Right now, (he's) up in Canada, on his tractor, not having a care in the universe. What if Brock Lesnar came back, Paul, and he wants to insert himself into being involved with the Tribal Chief, the reigning, defending, undisputed Universal champion?

PH: I find that your questions' very interesting.

PH: You're welcome. The problem that I have with your question is that it's based on a hypothetical. My father was a far smarter man than I will ever be, which is a testament to my father. My father used to have a saying, 'If your aunt had balls, she'd be your uncle.' She doesn't. So she's not. If Brock Lesnar were to return, if is a hypothetical. Brock Lesnar does what Brock Lesnar wants to do. How you can be cognizant of the fact that Brock Lesnar does not want to challenge Roman Reigns for the Universal championship, or at least not yet, is because he hasn't done it. Because if Brock Lesnar wanted to it, it would have happened already. And it hasn't happened already because he doesn't want to.