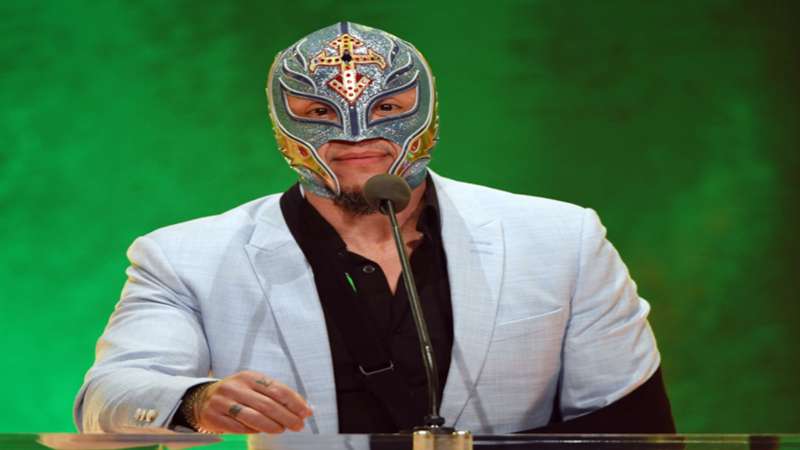 The former WWE champion is having fun in the latter stages of his career.

Rey Mysterio broke the mold when he came from Mexico to America to wrestle in ECW in 1995. The 5 ft. 6 in., 150-pound Mysterio dazzled fans with aerial ability that had never been seen before, along with being believable at the same time.

The year of 2006 changed Mysterio's life forever. He came into the Royal Rumble and entered at No. 2. Facing insurmountable odds, Mysterio went the distance to win the 30-man event. A little over two months later, at WrestleMania 22, Mysterio defeated Kurt Angle and Randy Orton to become the World Heavyweight champion.

Currently, the 46-year-old is coming off a tag team title run with his son Dominik and they are teaming with the returning John Cena in dark matches after SmackDown and on house shows through SummerSlam on Aug. 22.

Mysterio talked with DAZN News about everything from working with Dominik to how his son has done in his first year in WWE, losing the tag team belts to The Usos, and working with John Cena.

DAZN: How did this contest come about with you in Victoria to where two people will win custom crystal jeweled masks worth $10,000, and a necklace pendant worth $1,000?

Rey Mysterio: So partnering with Victoria and WWE, it only made sense being that I am Hispanic. My roots are from Mexico since that’s where I began my wrestling career in 1989. What better person to represent Victoria than Rey Mysterio himself?

DAZN: Where would you rate this in all-time Rey Mysterio masks?

RM: Oh my God, I would say it is in the top three. Each mask is worth $10,000 with crystals on it. What really sucks is that I don't get one. I would rate it number one if I had one.

DAZN: WWE is now back on the road with full capacity crowds. How big of a difference is it having the fans back compared to when you guys were at the Thunderdome?

RM: It makes all the difference. We are our athletes. I feed off my fans. That's my energy. That's my adrenaline. Now my son has been able to witness it firsthand. It's a completely different feeling when you're wrestling in front of fans. He had his first match during the pandemic. He's a pandemic boy. He had no idea what it was like to wrestle around fans.

Seeing him walk out on our first Smackdown in Houston in front of fans, it was incredible. To see his expression and see his energy and nerves, all of those emotions were unbelievable. For me, I've been waiting for this moment to happen. For us to have fans once again in the arenas, and on top of that, to be able to witness myself how my son would react to fans once he stepped in the ring and to do his thing. He's been doing incredible. He's impressed me.

DAZN: Dominik is nearing his one-year anniversary when he made his debut at SummerSlam 2020. How would you rate his progression?

RM: On a scale of one to 10, he’s about an eight in my eyes. Of course, I'm the father, so I see him do well every night. I am very picky with him because that's just how I am, even with my craft. But I also have to understand and tell myself, ‘Well, he's only been doing this for less than a year, so chill, relax. He’s doing good.

But at the end of the day, I think me being hard on him as much as I can is only going to make him better and possibly hate me as well. I just want him to do good. I just him to be ready, and I know he is ready now. He's been learning week by week. He's got incredible coaches next to him on a week-to-week basis. Last weekend, we wrestled with John Cena versus Roman (Reigns) and The Usos.

To hear Cena coaching him in the corner, and he just stayed quiet. What he learned from Cena is completely different than what he's going to learn from me. So I asked Cena to coach my son as much as he can. He's all yours. Dominik learned a lot this past weekend, and it's only gonna get better.

DAZN: Many fans were upset that you guys lost the tag titles to The Usos at Money in the Bank because of the recent DUI with Jimmy Uso. What was your reaction when you were told that you're going to drop the titles to them?

RM: I've never been a political person in this industry, and you can ask anyone. They'll probably tell you the same. I did not mind one bit. I'm very thankful that we have the opportunity to work with The Usos, and I'm very thankful that my son is learning from them because he is learning. They've been around for eight years, maybe more. I remember when The Usos were kids, and they would hang out with Umaga because I was really close friends with Umaga and Rikishi (The Usos dad). They’ve been around for a minute, and my son as well. So to be able to see their growth, how great they're doing, and at the end of the day, we all make mistakes.

We're not perfect. We sometimes stumble on the same mistake more than twice. The best thing to do is correct that mistake. I think this last one is definitely the one that really made him wake up and say, ‘Okay, I get it now. I messed up.' But we all deserve a second chance, sometimes a third chance. No harm there. I’m very happy and thankful to pass the titles on to The Usos. Our time will come back around. And when that time comes back around, I'm sure they're going to feel the same way when it's time to return titles back to Dominik and myself, and that might be at SummerSlam. It might not. It might be down the road.

But at the end of the day, I'm always prepared to return whatever I want, meaning titles, you know, whether it's a week, a day after. I became world champion, and I lost the title the same night against John Cena. So there's no hard feelings whatsoever from my end when I have to turn in the titles.

DAZN: John Cena is not around as much because he's doing great things in Hollywood. He's making a big difference so far in his return to WWE very quickly. What does it mean to you to be aligned with him during this current run?

RM: It's crazy. I have nothing but respect for John, and the same goes with The Rock. The Rock took off for Hollywood and came back on certain occasions, but he just became a humongous Hollywood star, and that's consuming most of the time. With John, he just happened to have a break right now, and he's back. Now he's not only doing TVs, but he's wanting to do house shows as well. So that just tells me the type of character he has, the type of person he is. He’s willing to drive and do the supershows that we're kicking off that we had last weekend and now this upcoming weekend.

It’s not only good for morale, but the fans are entertained and are buying tickets to go see Cena, my son, and myself. So we get the rub off of John. He made his name in this wrestling world, and now he's jumped over to Hollywood. But he's coming back and forth. This might not be the last time we're going to see him. I think we are going to see him more. But he's making the time, and I think we're all thankful from the WWE locker rooms that he’s taking the time to come back and put in the work that once made him famous.