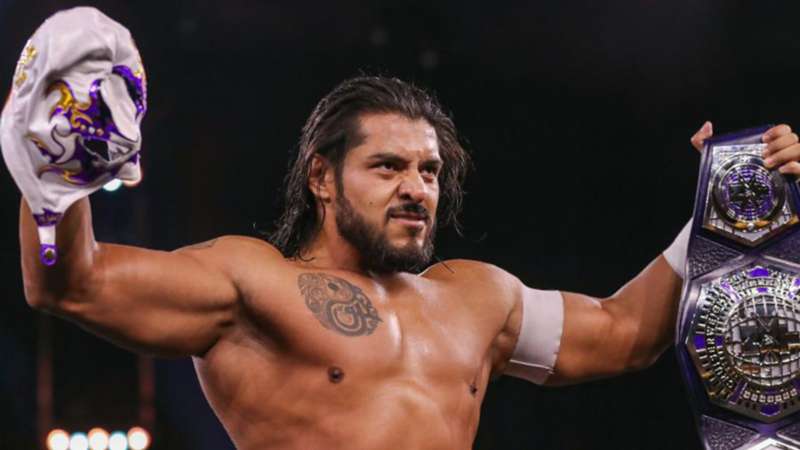 Is Santos Escobar the person to be the next Rey Mysterio and Eddie Guerrero for WWE?

The last Hispanic stars to make a splash in WWE were former heavyweight champion Eddie Guerrero and Rey Mysterio. Could WWE have their next star from Mexico?

Santos Escobar put himself on the map as one of the best wrestlers in the world, competing in the AAA and CMLL promotions in Mexico until leaving and heading to WWE in 2019 for the NXT brand.

Escobar has been one of the dominant players under the new NXT 2.0, leading the faction Legado del Fantasma with Raul Mendoza and Joaquin Wilde. In 2020, Escobar won the Cruiserweight title, holding it for 321 days.

On Tuesday, Escobar competes in his biggest match since signing a WWE deal, as he challenges NXT Heavyweight champion at Vengeance Day.

Before the championship match, Escobar talked with DAZN News about what it'd mean to win the title from Bron Breakker, making the transition from Mexico to WWE, and if he feels like he's the next Hispanic megastar in WWE.

DAZN: I've talked to Mexican stars in the past about how difficult to transition from whether it's CMLL, AAA, or New Japan to WWE. How hard was that for you?

Santos Escobar: It was challenging, mainly because I've been around in other companies and performed and done other products. Every company has their product. And of course, the essence, the roots, the basics, which is knowing the craft that I knew. How to present it now that's a different thing. That's a different matter and, of course, getting good at telling a story. That's very important because before, I was more committed to just showing up. Showing off the body, showing off the moves, being the champ, getting that spot. Whereas here, I'm more concerned about the product itself. And I want it to add up. I want to make the product better. I want to become a part of this product and make it even better, even bigger. How do I do it? Well, I have to examine myself, study myself, see who I am, what I bring to the table, and then when I do it, present in a different innovative, respectful manner that people make the ultimate investment, not only in me and my group but in the company itself. If you get people to invest time in you, then you're doing it right.

DAZN: How long did it take you to make, as you said, make that transition from the style you had in the past to getting more into the storytelling aspect of the business so you can be put in positions like this?

SE: I'm still learning. My mindset before I got here, and let me just say this, the Performance Center is just that is the best Performance Center in the world because they teach you how to perform properly. My mindset was a good acrobatic, life-threatening move would get people invested. Yes, don't get me wrong, it does. But then I found other ways to do it. So now, if you watch any of my matches, I get you invested emotionally, but I also give you the moves. So now I have this combination of what I used to do, and what they taught me how to do it. You have this melee of different hybrid of my own product, my own personal product that I had before that I have now. It probably took the first year here, training, showing up every day. twice, three times (a day at) the PC having one on ones, watching the matches, dissecting the matches, and just changing my mindset into becoming this entertainer, athlete, a larger-than-life character that portrays real-life stories in a ring.

DAZN: Except for Eddie Guerrero (and) Rey Mysterio, it's been extremely difficult for Hispanic stars to get over after making that transition from Mexico to WWE. You check off all boxes. You're a good-looking guy, got a good build, you have that charisma that when you come out, you pop out at the screen like Bron Breakker. Do you feel that you are the next big Hispanic megastar since Rey Mysterio and Eddie Guerrero?

SE: First and foremost, because that's exactly what I'm aiming for. That's exactly what I want. I want my people to see that in me. If you can see it, then maybe everyone else can see it. And to your question, yes, that's my aim. That's what I want to do. That's what I want to be. That's who I want to be in this company. I want to be the best Latino in the company. The way to do it is just like you said, check the boxes. If there are some boxes that you don't completely check, then work on it. Work on it, so you can check it, and that's what I've been doing for the past two years. I think you have to be ready for the show. Sometimes, the show will call you whether you're ready or not. But when it doesn't happen, just keep working, keep grinding, keep getting there and be ready. I realized now that we, as a whole and individually, we're ready for that.

DAZN: Have you talked to Rey at all or someone successful that it's been able to thrive in WWE, or have you talked to people outside of WWE that weren't as successful as a Hispanic star as they maybe should have been (and) gathered intel on to make sure you're doing the right things, so you're in the right place to succeed?

SE: You bet. Absolutely. That's part of my journey. Always account for all the people that's been here, that is here. Of course, Rey Mysterio is one of them. I don't know if you remember, but last year at Halloween Havoc, he lent me the same gear he wore at Halloween Havoc, and I wore it. Had to drop 10 pounds to do it, but I gladly did it because to me, it was just a way to be when I was 13 years (old). Now fast forward, and I'm able to just be a part of it somehow by wearing that gear. I'm always in contact with him, with Dominic, (and) other stars like Alberto Del Rio, Sin Cara, or my Mexican superstars from the Mexican scene like Pagano, Psycho Clown, all of them.

We're always in contact because the one thing that I don't know is, of course, I feel how I perform, and I have the feeling when something is good, so so, not so good. But they have the perspective. That gives you clarity, distance, and perspective. So they can tell me you're looking good on this, and you’re looking good at that and maybe work harder on this. How about you change your body back into the core perfecto, the Lucha Libre. That's the kind of input that you want. Of course, when you come back from that ring, you have right there. The Heartbreak Kid (Shawn Michaels), Triple H, Robbie Brookside, Norman Smiley, Terry Taylor, William Regal. They give you all the ideas, all the points, and the feedback that you need to succeed and to grow.

DAZN: How much did that hurt losing William Regal?

SE: Regal, to me, is a very important person. Personally, when I first did my first tryout, my first and only tryout, which was probably 2009-ish. Yeah. He's the one that spotted me from the moment he saw me. He said, ‘You got it. You got what we need. You got what we want.’ Of course, it was not his job to hire people. His job was just to spot people. Nothing came out of that. But then, as the time progressed, and as I evolved as an athlete, and I kept doing the right moves and checking all the boxes you mentioned before, we always kept in touch. Then eventually, I was able to come. Once I got here, of course, it was that feedback. It was that opportunity to be one on one with the people that can teach you, like Triple H, for example, or Terry Taylor, or The Heartbreak Kid, which to me is just sometimes, it's unreal. Because you have the Heartbreak Kid here, face to face telling you, ‘You did good kid. Do this, do that.’ Or when you screw up, they give you the business. Your face is not that of a person that's being given the business, but you're more just in awe looking at them. That is just a whole lot of emotions that keep coming. They just keep coming. I think the best thing that I can do is just absorb it and then put it out there with my work.

DAZN: What would it mean to dethrone the Bron Breakker train and become the NXT Heavyweight champion?

SE: It would mean the world to me because that is the one thing that I think I need in my tenure on NXT. Now, whatever happens after that, who knows, but that title needs to be here.