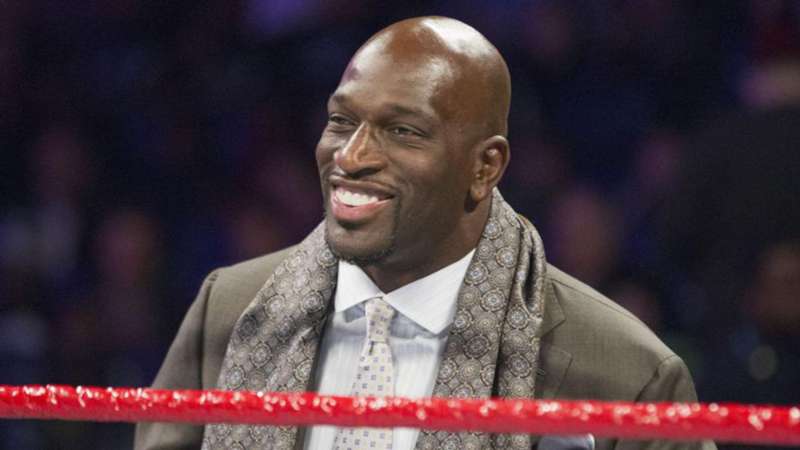 The Global Ambassador of WWE talks with DAZN News about a prestigious honor.

Titus O'Neil has accomplished many things in 12-year tenure in WWE.

O'Neil is a former tag team champion and 24/7 champion, and was the co-host of WrestleMania 37 this year in his hometown of Tampa alongside Hulk Hogan. He isn't as active as he once was inside the squared circle due to him being a Global Ambassador for WWE.

On Monday, O'Neil learned that for the second consecutive year he's been nominated for the Muhammad Ali Sports Humanitarian Award. The live show will take place on July 12 from The Rooftop at Pier 17 in New York City with a TV special that will air on July 24.

O'Neil sat down with DAZN News to discuss what it means to be up for the award named for his favorite athlete, what his kids think of him and working with Hogan at WrestleMania.

DAZN: You are a finalist for the Muhammad Ali Sports Humanitarian Award. Anthony Rizzo is a finalist as well, and I hate the (Chicago) Cubs. So I am rooting for you 150 percent.

Titus O’Neil: I appreciate the vote of confidence. I think that every last one of us has done some extraordinary work. This is the second year in a row that I've been named a finalist. Not many people can say that. That in itself shows that the work that not only those guys are doing but what I'm doing is consistent. I'm really looking forward to seeing what the outcome is. But at the end of the day, the work is still continuing just like I did last year, even though I came up short of being the big prize winner. I think we all were great prize winners because our platforms were given an opportunity to be shown in a way in which sports and entertainment sometimes, I think, people take for granted. The work that so many athletes and entertainers put in behind closed doors and the significance that they make in their respective communities.

DAZN: The prestige that Muhammad Ali brings to the table, what does it just mean to you to be nominated not just once, but now two years in a row?

TON: First and foremost, it means that the people that invested in me long ago when they had nothing to gain in return, we're doing a good thing. That work that they put in to make sure that I could be the first person to graduate from high school, the first person to go to college and graduate from college for my family, the first person to own a home, and the list goes on and on. Now, I’m a proud father of two sons and a guy that didn't grow up with a father in the home. To me, when you take that, coupled with the fact that Muhammad Ali is literally my favorite athlete of all time, it is not only humbling, but also it just goes to show what can happen when people put themselves aside and look further than their own situation and say, ‘Let me help somebody.’

DAZN: What did you ever think when you became a pro wrestler that this would be the route you'd be at this point?

TON: Yes and no. I'm doing the same thing I've done for years. So I can't say that I would have predicted that I will be a two-time finalist for the Sports Humanitarian Award. But I can tell you that I'm not surprised at the fact that the work that I've done is getting this type of spotlight because I've been doing it for years. I've been doing it since high school. I always say consistency is the key to breakthrough. That's with any and everything that you're doing in life. I just feel like I've been doing this for so long, with the right heart, the right mindset, and in a different way. I don't believe in transactional engagements. I believe in transformational moments and situations where we can put people in a situation to not just get a gift for Christmas but also get a job, get a high school diploma, get a trade, get a home, get a car. These underserved families that we get a chance to serve on a consistent basis.

I'm a very grateful man. I’m very fortunate to be part of this company, especially when it's not something I set out to do 12 years ago. I think that being labeled as a Global Ambassador is a stamp of approval from every single person in the office, especially Vince McMahon.

DAZN: What do your two boys think of what dad is currently doing?

TON: They love their dad, and dad loves them. I know without a shadow of a doubt that neither one of my kids want to be in the wrestling business. But they play sports. My oldest son is a heavily recruited high school athlete, and right now, he's been going on college visits throughout the summer. My younger son will be in that same position. He's a sophomore now but [with] great upside. Our whole thing in our family is just to be our best. I've never forced my kids to play sports. Quitting is not an option. If you try a sport and the team sucks, and the coach is not that good, you just finish out the season and then try to look and reevaluate that in the year. As a father, sometimes it comes short because we look at our kids, and you should do it like this, you need to do it like that, and sometimes it's like you got to let them find their own way. They got to fall, and sometimes they got to stumble but just be there to kind of help them and don't let them fall to the point they're going to kill themselves before to the point where they might get hurt. But that's a valuable life lesson. I always encourage every father, whether you're a single dad or married or whatever. That’s the greatest title I've ever had in my life. I would love to be the Universal champion. I would love to be the World champion. But being a father is the greatest title that I'll ever hold, and it's the one that I cherish the most.

DAZN: A lot was made about you hosting WrestleMania with Hulk Hogan. You had made comments in the past about Hogan and everything that had went on with him. Did you guys have a conversation and be like, ‘Hey, I may not appreciate what you did, but we can work together?'

TON: No. We spoke a little bit after I got upset about the apology. We had a private conversation. But at the end of the day, I'm not one to be able to cast judgment on anyone. I looked at the opportunity to host WrestleMania in my hometown, where I'm literally the unofficial Mayor here in Tampa. To do it with a guy that essentially put WrestleMania on the map, I looked at it as a business decision that was made. Vince McMahon runs this company, and everyone else that is associated knows that. I have a very special relationship with Vince. I don't think that there was ever a moment where he felt like this was something that would put me in an uncomfortable position. Because it really wasn't. I know who I am. I know what I represent. Even after hosting, to be honest with you, it was very pleasant to work with him. We had some stuff that he allowed me to change up, and we worked very well off of each other. I didn't expect the reaction that he got. I didn't expect the reaction that he received. I expected a little bit here and there, but nowhere near where it was. But at the end of the day, to Hulk’s credit, he took it with pride, and the show went on.

A lot of people on social media said hats off to you, man, for working and being professional and working with Hulk and that they we know what you said in public. I meant everything that I wrote. But at the end of the day, I don't harbor any hard feelings against anybody. I think that's his cross to bear. My job is to be professional and make the best product possible for whatever I'm giving. I think we did that. I had a lot of fun. We dressed up as pirates. It was very hot, but it was fun. I got a chance to do it at home, and I will do it ten times out of 10 alongside Hulk Hogan if asked if I had the opportunity.