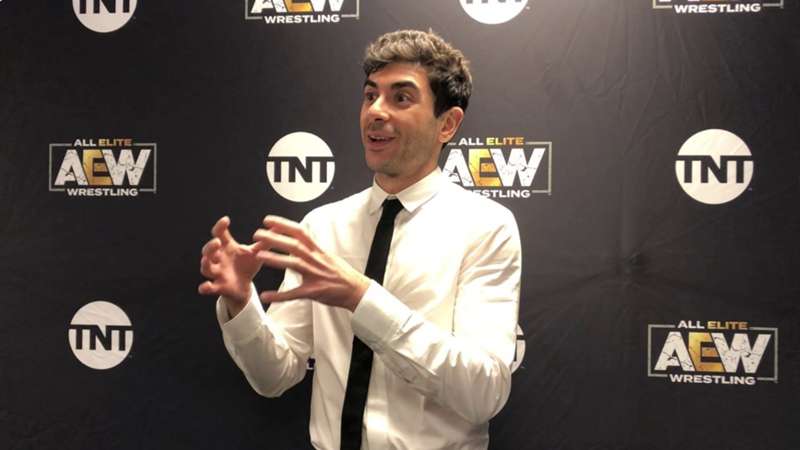 Exclusive interview: AEW chief Tony Khan is struggling to hide his excitement as his wrestling promotion prepare for a run of very important shows.

It’s just before 1am when Tony Khan takes a call to discuss wrestling.

The relentless Khan’s Saturday and Sunday has been consumed by Fulham FC and the Jacksonville Jaguars but as the weekend morphs into Monday morning, the AEW President is fully focused on ‘Winter is Coming,’ AEW’s seasonal special that drew incredible feedback in 2020.

Last year, Sting’s AEW debut at ‘Winter is Coming’ following a lacklustre run in WWE reminded fans of the WCW icon’s standing in the sport. A stunning moment was followed up later in the evening by Kenny Omega’s thrilling battle with Jon Moxley that saw the former become world champion for the first time. Anticipation for volume two is high considering the standard reached at the inaugural event.

Occurring during an era that has seen AEW announce themselves as serious players amongst the pro wrestling landscape, ‘Winter is Coming’ follows September’s ground-breaking ‘All Out’ and last month’s ‘Full Gear.’ Armed with shocks, surprise debuts, and incredible bell to bell action, the last four months of AEW programming rank highly and Khan is still pumped to deliver even more after maintaining the initial buzz that surrounded ‘All Out.’

“Are you a movie fan?’ asks Khan. “Those two pay per views were like Godfather 1 and 2 for me.

"The plan now is to make the next stage just as impressive and not just provide something okay like Godfather 3. I don’t want to give wrestling fans a product that is just okay. Those two films are amongst my favourite movies, and it showed that you can deliver something that people love and then follow it up with something similar.”

With ‘All Out’ largely remembered for the in-ring return of CM Punk and the shocking debuts of Adam Cole and Bryan Danielson, ‘Full Gear’ took a different approach. MJF and Darby Allin delivered one of the finest PPV openers of all time and Hangman Page finally became the man with an emotional victory over old friend, Omega, following a two-year story arc. Khan was delighted with how each marquee event materialised.

“At ‘All Out’ we had that amazing finish to close the show that gave us a platform to give even more going forward," he explained.

"‘Full Gear’ allowed us to have Danielson against Miro in the world title tournament final. We had Adam Cole in a brilliant six-man street fight and then there was CM Punk following up his win over Darby with another great match against Eddie Kingston.

“’All Out’ saw the top end of our roster get a fresh look but we had the opportunity to show that off at ‘Full Gear’ which meant our new guys combined with the great talent we already had were able to go out and put on a great show. It was going to be hard to follow ‘All Out’ but like I’ve said, I’m big on giving our fans the very best every time we put on a show and I was really happy with what we achieved at ‘Full Gear.’ "

With AEW’s next PPV not taking place until March, Khan’s stampede towards ‘Revolution’ will be televised.

With a number of festive offerings in the pipeline before ‘Dynamite’ makes the permanent switch from TNT to TBS in January, Khan’s weekly shows are set be stacked as his company bridges the gap between ‘Full Gear’ and ‘Revolution.’ That begins this Wednesday with ‘Winter is Coming,’ and Khan finds it difficult to hide his excitement.

“It’s Hangman Page defending his AEW title against Bryan Danielson. A dream match. Do I have to say anything else? MJF against Dante Martin for the Dynamite Diamond Ring. A wrestler who’s had a really good 2021 against a 20-year-old with one of the brightest futures in the entire industry.

"What about Serena Deeb against Hikaru Shida? Another match that has the potential to steal the show. This is a show that I’m really excited about and I’m confident that ‘Winter is Coming’ this time around can have the same impact as last year’s version.”

With the scheduled matches for ‘Winter is Coming’ likely to exceed expectation considering the talent involved, what about performers making their way onto an AEW ramp for the first time? With Sting’s entrance last December now a striking moment in the Florida company’s brief history, can Khan provide any hints on whether any fresh faces will make ‘Winter is Coming’ their platform in a similar fashion to Sting?

“I’m more than aware that there’s a number of free agents out there, wrestlers I admire too, but I’ve got to say that you just have to keep watching over these next few weeks and not just ‘Winter is Coming.’

"There’s the ‘Holiday Bash’ special from Greensboro, North Carolina, that includes the Christmas Day ‘Rampage.’ We have the last ever episode on TNT followed by the debut episode on TBS. There’s ‘Battle of the Belts’ coming in January. I want AEW to run shows that you just can’t miss, and I think these next few weeks are going to be really exciting for fans of wrestling.”