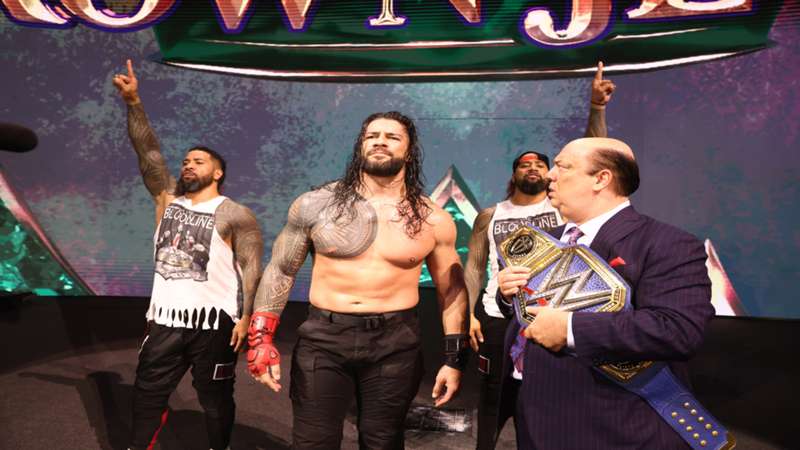 Reigns and Lesnar brought the goods in Saudi Arabia.

The hype around Thursday's WWE Crown Jewel at Mohammed Abdu Arena on the Boulevard in Riyadh, Saudi Arabia, was focused on the Universal Championship match between Roman Reigns and Brock Lesnar.

WWE's two biggest attractions delivered an entertaining and physical style match. But in WWE fashion, they couldn't have a conclusive finish as Reigns needed the help of cousins The Usos and a belt shot to Lesnar's head to retain the belt and cap off a really good show.

Reigns and Lesnar brought the goods. They threw everything at each other, including the kitchen sink. They kicked out of each other's finishing moves. Lesnar hit one more F5 but it knocked into the referee.

With referee Charles Robinson out for the count, Reigns delivered a spear. With Reigns and Lesnar lying on the mat, former advocate of Lesnar and current Special Counsel to Reigns, Paul Heyman, didn't know who to help. He threw the belt into the ring and landed in between them. A tug of war ensued. Lesnar got the belt and Reigns' cousins and members of The Bloodline, The Usos, hit a double superkick and Reigns hit him with the championship for the pin. Obviously, the story will continue, but it was a poor way to end the event.

Here is what happened at WWE Crown Jewel.

facebook twitter whatsapp
Reigns missed another spear and went into the turnbuckle. All that did was fire Lesnar up. He executed a series of German Suplexes and then lifted Reigns up and hit the F5. But Reigns kicks out at two. Loving this. Crowd is really into it.

Lesnar kicks out of the spear

facebook twitter whatsapp
After a Superman Punch, Reigns flew over the top rope with a splash. Lesnar got into the ring and Reigns hit the spear. But Lesnar kicks out! What a match.

facebook twitter whatsapp
It is time for the main event of Crown Jewel as Roman Reigns puts the Universal Championship on the line against Brock Lesnar.

The finish to this is going to be very interesting. Could go many different ways.

This was a fantastic triple threat match. A lot of great technical wrestling and a ton of ability. Lynch is the biggest star but Banks is the best wrestler and Belair is the future. They compliment each other so well.

It came down to Lynch locking in a Double Disarmour on Banks and Belair. Belair was able power herself up to deliver the KOD to Lynch. Banks broke up the pin and we saw a series of quick reversals, finishing with Banks throwing Belair to the outside.

Banks rushed into the ring and Lynch rolled her up into a small package and grabbed the bottom rope for leverage for the pin and to retain the belt.

A great match and all three women should be commended for their efforts.

facebook twitter whatsapp
It's time for the co-main event of Crown Jewel as Becky Lynch defends the SmackDown Women's Championship against Sasha Banks and Bianca Belair.

A big match for all three ladies. Who leaves Saudi Arabia with the gold?

What a back-and-forth and physical matchup between the super-heavyweights. We saw great technical wrestling, stiff punches and a wide variety of moves.

After kicking out of The Big Ending, McIntyre went on the offensive which culminated with The Claymore Kick. Somehow, some way, Big E kicked out at two, much to the shock of everybody, including McIntyre.

The former champion went for a Big Ending of his own but Big E slipped out and reversed it into a Big Ending to retain the title.

A heck of a match to continue Big E's dominance.

facebook twitter whatsapp
Now at Crown Jewel, Big E puts the WWE Championship on the line against former champion Drew McIntyre. If given any time, this should be really good.

A pretty rushed bout as it was fast-paced and can tell each guy had to get through their stuff. Balor hit the dropkick, went to the top but missed the Double Foot Stomp. Woods went on the offensive and hit an impressive suplex backbreaker. Woods walked the ropes to deliver to the elbow drop for the one, two, three to win the Men's King of the Ring.

The dream has come true. 👑

Wish they would have been given more time to shine.

Men's King of the Ring final

Woods talked earlier today about how much this match means to him.

My entire career I’ve been told to tone it down, don’t be my FULL self. I’m too ridiculous, I don’t fit in. Just be like everyone else. Don’t think outside the box. Tonight, I have a chance to show all of those people they were wrong.

This is the most important match of my life pic.twitter.com/LzLo5l9dPK

The Hurt Business came down the ramp to help out Lashley. Goldberg dispatched them rather easily and reshifted his focus to Lashley. A groggy Lashley was on the ramp when Goldberg delivered an unbelievable spear off the ramp and through a set of tables.

A physical affair with the expected finish.

Goldberg out for blood

facebook twitter whatsapp
After getting dominated, Goldberg moved out of the way as Lashley tried for a spear and ended up through the table. Goldberg is trying to come back from a left knee injury. He hit Lashley with a spear and his trademark Jackhammer. Instead of going for the pin and the victory, Goldberg is putting a vicious beating on Lashley. He speared Lashley through the barricades and tossing him around all over ringside. He put his head on the steel steps. He put his head on the stairs and went to throw another set of stairs at his head but missed.

Lashley beat Goldberg at SummerSlam to retain the WWE championship in a short, but explosive match. The fact it can go anywhere and end anywhere all but ensures this will go a little longer than expected.

Not a great match but it wasn't bad. A little clunky to start but the last few minutes was solid. It ended when Vega somehow performed a Canadian Destroyer on Doudrop to win the tournament.

Let's hope Vega gets a push. The talent is there. Just let her shine and give her some pretty meaningful wins.

Who wins the first-ever tournament?

Orton received the hot tag from Riddle and threw Styles into Omos to knock the big man onto the floor. Orton hit a beautiful snap powerslam. Omos made his way to the ring apron but Orton knocked him off and Riddle delivered a stiff right hand for good measure.

Orton turned around and got punched by Styles. The former WWE champion went for a Phenomenal Forearm but Orton blasted him with RKO. Orton tagged in Riddle, who went to the top turnbuckle and executed the Flying Bro for the one, two, three and RKBro hold onto the titles.

A solid match between these teams. Orton and Riddle have amazing chemistry. They have been well-booked and both guys are pretty over.

facebook twitter whatsapp
Instead of coming out on his customary scooter and riding down to the ring, Riddle goes to the back and comes out riding on a camel. There's something you don't see every day.

facebook twitter whatsapp
Coming up at Crown Jewel, RKBro (Randy Orton and Riddle) defend their Raw Tag Team titles against Omos and AJ Styles. They squared off at SummerSlam with Orton and Riddle winning the belts. If given time, this should be good.

Hometown kid gets it done

A better than expected match. It ended when Mansoor slingshotted over the ropes into a neckbreaker for the pin. WWE never books the hometown talent to win for one reason or another. They actually got it right for once.

Mansoor definitely has some talent. Would be nice to see him get a proper push and not just for shows in Saudi Arabia.

facebook twitter whatsapp
Up next at Crown Jewel, Mustafa Ali faces Mansoor. They are former tag team partners who are now on the other side of the block. Can Mansoor get the nod in his hometown and home country?