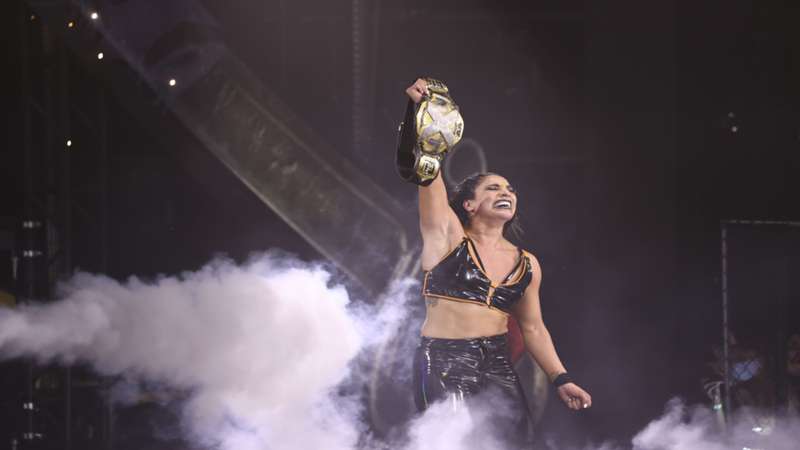 The new queen of NXT sits down with DAZN News after winning the gold.

A new era began for the NXT women's division when Raquel Gonzalez defeated Io Shirai to capture the WWE NXT Women's Championship in the main event on night one of Stand and Deliver last week.

History, no, HERSTORY is made tonight as @RaquelWWE defeats @shirai_io to become the NEW #WWENXT #WomensChampion!!! #AndNew #NXTTakeOver #NXTWomensTitle pic.twitter.com/1a3YRVi4tB

Gonzalez's first appearance as the queen of the mountain comes on Tuesday night of WWE NXT. Ahead of the show, Gonzalez spoke with DAZN News about winning the title, following in the foot steps of past women's champs, and the new wave of women's wrestling led by herself, Bianca Belair and Rhea Ripley.

What better way to ring in #NXTuesday than with the new NXT Women's Champion?

Hear from @RaquelWWE TONIGHT on #WWENXT!

DAZN: Congratulations on becoming the new NXT Women’s Champion. Has it sunk in yet as by the time you get to NXT, you’ll be six days into your title reign?

Raquel Gonzalez: The longest title reign I’ve had (laughs). It's definitely starting to sink in I think today because we had the weekend to go through WrestleMania and enjoy the huge moments that were on night one and night two. Now that it's been Monday and I'm here talking with you and really thinking about my moment Tuesday night on USA. It's starting to sink in. I am the new NXT Women's Champion, and that division is mine.

DAZN: You look at the lineage of who's been the NXT Women's Champions. You look at Charlotte, Bailey, Becky (Lynch), and Asuka. How does it feel to be the champion now, considering who's held that title before you?

RG: It feels amazing. It's such an honor to know that they (WWE) looked at me and said this is someone that we can trust, and someone that we believe can lead this locker room and lead this division into the next chapter of NXT. NXT is known for being not only the third brand of WWE but for being innovative, for being creative, and a little different style from RAW and Smackdown. That's something that I know they're looking to me to continue to deliver, to continue to bring eyes and new eyes to the women's division. NXT is forever growing, forever changing, and forever developing and evolving into something bigger and newer it feels like every month, but I know time flies by.

DAZN: Change seemed to be the big theme of WrestleMania week. You kicked it off on Wednesday night, and then two great friends of yours, Bianca Belair and Rhea Ripley becoming the SmackDown Women's Champion and RAW Women's Champion, respectively. It seems like it's a new era for women's wrestling in the WWE. Now it’s the athlete? Look at Bianca's background. Look at Rhea’s background. You look at your background playing college basketball. Am I right on that to where it's the athlete that’s becoming the new wave of women's wrestling in WWE?

RG: Yeah. I would say it's not even so much just the new athlete, but I think it's the new powerhouses. I think the women's division has always had maybe one or two women that are considered powerhouse athletes, powerhouse sports entertainers. Now you have multiple ones but powerhouses that are different in their own styles as well because Bianca as we know is very agile, and she can flip, and she can jump. She's strong, she's powerful, and she can throw. Then you have Rhea Ripley, and she's quick, she's swift, she's vicious, and she's brutal with everything that she does. Then you have someone like me who's taller, strong, and developing a more big man type of style. But at the same time, we all find our similarities amongst each other. I think that's what pushes us to be the new kind of athlete, like you said, of the women's division in WWE because we all came into the Performance Center it was something that was more unspoken, but it's something that you develop when you're a part of a team, and that is you push each other in a good way, you push each other to work harder, you push each other to make the other person want to work harder for themselves by being your best, but you also want to see them succeed. I think that's what all three of us have in common is that we kind of share that as a group and as family and as friends.

DAZN: How proud were you watching Bianca on Saturday and Rhea on Sunday?

RG: I was so proud and so excited because I know how hard both of them have worked. I know that both of them have been going through their own journey and their own struggles as I've been going through mine. To see them both move up to the main roster, have a little bit of a slower start, but then be put into these epic roles right at WrestleMania. I'm speechless for the work that they put in. It's amazing what they both created this weekend.

DAZN: I saw a picture of you being in there at WrestleMania up close in person. When you're watching Bianca and Rhea, are you envisioning yourself in that ring, or are you just watching the performances?

RG: This weekend, I was definitely watching the performances. I will say for some of the other matches, I did envision myself. But because I do know Bianca and I do know Rhea, I mentally wanted to put myself in a position where I could enjoy their work, where I could enjoy what they were doing and enjoy it to the point of where I felt like I was celebrating with them at the end of both of their matches. I felt like I was up there with them. But I definitely will say that sitting at WrestleMania this year, I was envisioning myself being there one day as well and envisioning myself reaching new heights, new limits then and telling myself that I've come this far in four years since signing with the WWE and just expecting the unexpected for the next year to come especially because next year's WrestleMania will be in Dallas with your precious Cowboys.

DAZN: You talked about the struggle, and you look at how far you've come from the Mae Young Classic to this point. When do you feel like it finally clicked for you to the point where you are right now?

RG: I think it was in total, just a whole year of it finally slowly clicking for me. I think it was what it was because even at my debut, I was still trying to figure out who is Raquel? What is she going to do? How is she going to act? How is she going to put off this vibe that she wants to give off? It was just a series of events after that, from being a part of Takeovers to being a part of matches with Dakota (Kai) to having her by my side and learning from her and then being put into other matches that were first for me like War Games, Last Woman Standing and my first ever Takeover. It's been all of that each time has slowly built my confidence. I think that at the same time, it's slowly been clicking for me that this is what I know I can do, and this is what I know I can produce, and I’m meant to be here.

DAZN: How much of a help has Dakota Kai been for you?

RG: Dakota Kai has helped me so much. I say this all the time. I would not be in the position I am if it wasn't for her because we've shared not only travel stories but memories together and working with each other as a tag (team) to winning the first Women's Dusty Classic and being the first NXT Women's Tag (Team) champions to both of us having our own stories with her to me with Rhea. It's been constant support from her and having her there and (having) someone you can confide and trust in such a crazy time. It's very rare to have that and to have that in a tag partner and to know that we both have the same mindset when it comes to anything that we do for NXT. We support each other. We appreciate each other's criticism and opinions. She comes with so much experience. You can't top that. I was put in such a blessed situation to have Dakota on my side.