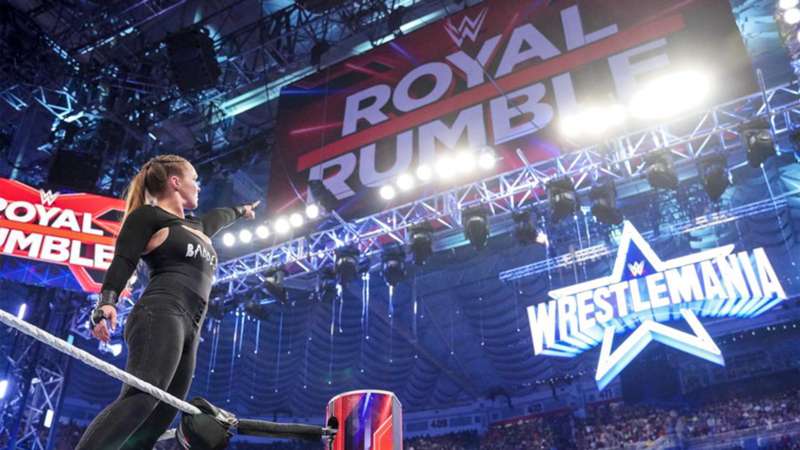 The road to WrestleMania 38 started off with fireworks.

ST. LOUIS — The Royal Rumble is the jump-start on the road to WrestleMania.

The 2022 installment on Saturday from The Dome at America's Center began that road in earnest, with Ronda Rousey winning the women's Royal Rumble and Brock Lesnar victorious in the men's edition. Rousey and Lesnar earned world championship matches against the champion of their choosing in the main events of WrestleMania, which occurs over two nights on April 2 and April 3 at AT&T Stadium in Arlington, Texas.

The women's Royal Rumble marked the return of Rousey, the former UFC women's bantamweight titleholder and former Raw Women's champ. She appeared for the first time on WWE television since losing to her belt to Becky Lynch in the main event of WrestleMania 35 back in April 2019.

Rousey entered the Rumble at No. 28 and the announced crowd of 44,390 came unglued at the sight of the superstar. The "Rowdy" one marched right into the ring and cleaned house, eliminating five women in total. It came down to Rousey and SmackDown Women's champion Charlotte Flair.

With the crowd on their feet, Rousey and Flair circled one another. Flair rushed in and attempted a boot to the face. But Rousey caught the leg and flipped Flair over the top rope to win her first Royal Rumble.

Early in the show, Lesnar lost his WWE championship to Bobby Lashley after Roman Reigns — with the assistance of Lesnar's now-former advocate Paul Heyman — used a spear and then hit him with the belt to cost "The Beast" the gold. Lesnar was then the final entrant at No. 30 and wrecked shop by immediately eliminating four people.

It came down to Lesnar and Drew McIntyre. The former two-time WWE champion eliminated Lesnar at the 2020 Royal Rumble. This time, Lesnar got the better of the exchange by tossing McIntyre over the top rope to win his second Royal Rumble.

Here is what happened at the WWE Royal Rumble 2022.

facebook twitter whatsapp
Right now at the Royal Rumble is Becky Lynch defending the title against Doudrop. No reaction for the challenger while Lynch got giant reaction. Should be a hard hitting affair.

facebook twitter whatsapp
Flair went for the big boot and Rousey caught her leg and dumped over the top to an enormous reaction. Rousey is in one of the main events of WrestleMania 38. Who will she pick to face?

Belair is trying to dump Baszler and Flair dumps them both out. It's down to Rousey and Flair with the crowd in their feet.

All entrants have entered

facebook twitter whatsapp
Coming out at No. 28 is Ronda Rousey, who is making a her return to WWE. The loudest pop of the night up to this point.

THE ROWDY ONE IS BACK.@RondaRousey is in the #RoyalRumble Match!!! pic.twitter.com/qUEHGwMlhn

facebook twitter whatsapp
At No. 24 is former Women's Champion Nikki Bella. A good reaction for Bella. Immediately, she tosses out Alicia Foxx with a stiff right forearm.

facebook twitter whatsapp
At No. 20 is Impact Wrestling Women's Champion Mickie James. An enormous reaction for James, who has the belt around her waist. She comes right in and throws out Michelle McCool.

facebook twitter whatsapp
The SmackDown Women's Champion, Charlotte Flair comes to a massive reaction at No. 17. There's six women in the ring. Getting packed inside the ring.

facebook twitter whatsapp
The former RAW Women's Champion Bianca Belair is No. 8 and gets a tremendous pop. Right now, she's the favorite of those inside the ring.

facebook twitter whatsapp
Coming in at No. 7 was Queen Zelina, who immediately came in and tossed out Banks. What a shock as Banks was expected to be in there for a good chunk of time.

Sasha Banks on a run

facebook twitter whatsapp
We are at entrant No. 6, which is Liv Morgan. There are four women in the ring, but Banks has thrown out two of them.

The No. 1 entrant is Sasha Banks and No. 2 is the returning Melina. Here we go.

Rollins def. Reigns via DQ but Reigns hold onto the Universal title.

Reigns put Rollins in a guillotine choke. Rollins made it to the ropes but Reigns refused to release the hold and referee Charles Robinson disqualified Reigns, much to the dismay of the crowd, who let their frustration out as they booed lustily. Reigns grabbed a chair and beat the tar out of Rollins. Not a good finish to begin the show. There were better ways to end the match. And that wasn't one of them.

Rollins and Reigns kick out of big moves

facebook twitter whatsapp
Reigns appears to have things in the bag with The Superman Man Punch. But somehow, Rollins kicks out at two. Reigns goes for his patented Spear but Rollins turns it into Pedigree. But now Reigns kicks out at two to save his title for NOW.

The 2022 Royal Rumble is starting with Roman Reigns defending the Universal title against Seth Rollins. A gigantic reaction for the champion. Then Rollins comes to the old Shield music and walked through the crowd that made the fans erupt. Can Rollins beat "The Head of the Table" one more time?

facebook twitter whatsapp
Welcome to DAZN News' live coverage of the 2022 Royal Rumble. We are inside The Dome at America Center. It's a wild crowd already which should make for an entertaining night.