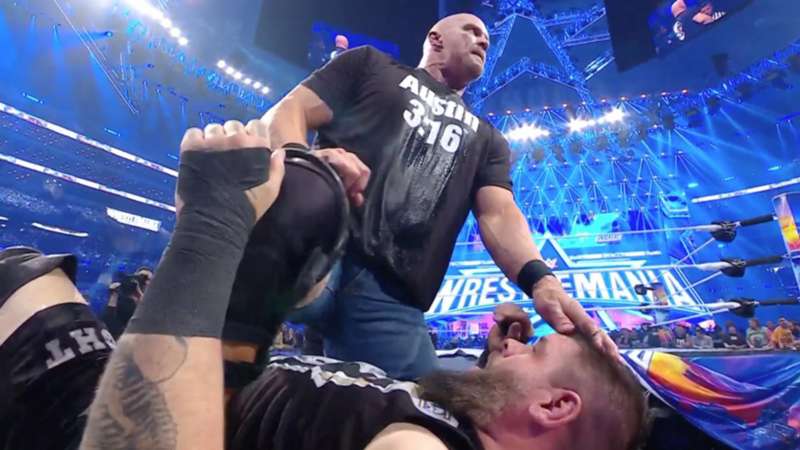 The biggest weekend in pro wrestling begins on Saturday.

The Super Bowl of professional wrestling kicked off Saturday as night one of WrestleMania 38 took place from AT&T Stadium in Arlington, Texas.

Night one didn't disappoint as the event closed with the legendary "Stone Cold" Steve Austin coming out of retirement to beat Kevin Owens in a no-holds-barred match. The segment was initially designed as Austin being a guest on Owens' The KO Show. But instead, Owens ran down Texas and Austin. That led to Austin coming out to a monstrous reaction in his home state and the first place he had his pro wrestling match. He went to each side of the ramp and then went to the back to get his ATV and drove down to the ring.

After some back-and-forth trash talk between the two, Owens challenged Austin to the no-rules contest. Austin contemplated the offer as the crowd was cheering "The Texas Rattlesnake" on to accept. Austin did, and they brawled all over the arena. They battled in the ring, outside the ring, in the crowd, and on the entrance ramp. In between all of the activity, Austin found time to snatch up beer and have a drink in the proceedings.

They made their way back into the ring, which saw Owens hit the Stunner, but Austin kicked out at two. In anger, Owens rolled to the outside and grabbed a chair. He slid back into the ring and went to waffle Austin. He missed, and the chair bounced off the ropes and hit him in the face. That was the opening the former WWE champion needed as he hit Owens with his trademark Stunner for the victory to a thunderous reaction.

After the match concluded, Austin hit one more Stunner for good measure. Then, he kicked him out of the ring. Two police officers escorted Owens out of the venue while Austin drank more beer and celebrated with the fans.

Get that piece of trash out of @steveaustinBSR 's ring! #WrestleMania pic.twitter.com/y3MR1yNxFy

Here is what happened at WrestleMania 38.

What a fun brawl. Austin took more bumps than expected, but in the grand scheme of things, he drank a lot of beer, beat the tar out of Owens, and hit the Stunner to win his final match.

facebook twitter whatsapp
Owenslays down the gauntlet and challenges Austin to a No Holds Barred match. After some teasing, Austin accepts. Here we go.

facebook twitter whatsapp
Owens is running down the state of Texas and Austin. The glass shatters and the crowd loses their mind as you could feel the reaction as Austin comes out.

facebook twitter whatsapp
It's time for the main event of night one at WrestleMania 38 as the legendary "Stone Cold" Steve Austin is a guest on The KO Show with Kevin Owens.

Austin promises violence. We are about to find out.

The match was ground-based, which took a little while for the crowd to get into it.

Rousey looked to have the match won as she hit Piper's Pit, but Flair's foot was on the rope as the referee counted to three. Rousey was upset with ref Charles Robinson, but the ruling stood.

Rousey went to get Flair but hit Robinson. Flair tried to take advantage, but Rousey snatched the arm for her patented armbar. Flair was tapping out, but Robinson was knocked out. Rousey picked Robinson up, but Flair hit the big boot for the surprise pinfall.

No one saw that coming, as that's Rousey's first loss in one-on-one action.

Can Rousey and Flair top the Raw Women's title affair between Bianca Belair and Becky Lynch?

Cody Rhodes wins in his return

The match started slow, but it picked up significantly down the stretch that had on their feet for the last ten minutes.

It was hard-hitting, as both guys were battered and bruised up. Rhodes hit two Cross Rhodes and was on his way to a third when he let Rollins drop to the mat.

He let Rollins up and hit his father, the late Dusty Rhodes' finishing sequence, which was a series of popping jabs, rolled his arms, and delivered a bionic elbow. Then, Rhodes delivered one more Cross Rhodes for the pin to a gigantic reaction from the crowd.

Another great story told. You could see how much Rhodes and Rollins wanted to put on a show, and they did just that. Couldn't have asked for a better way to return for Rhodes in what was truly a WrestleMania.

Seth Rollins was waiting patiently in the middle of the ring when fireworks went off, and the arena went dark when Cody Rhodes' voice blared into AT&T Stadium, and the roof nearly came off the venue as Rhodes pops up and makes the walk to the ring.

What an unbelievable moment.

Who is Seth Rollins' WrestleMania 38 opponent?

A lot of rumors about who it could be. We will find out in moments.

A physical, back and forth that saw Belair and Lynch leave everything they had inside the ring. They told a fantastic story and had the crowd in the palm of their hand the entire way.

Lynch looked to have the match won when she hit The Manhandle Slam on the ringside steps on the outside. The referee made it to nine, to the disgust of Lynch. She went for one more Manhandle Slam but Belair jumped to the top rope, did a backflip. Lynch missed a move and Belair caught her in the KOD to become a two-time champion, as the crowd erupted.

The best match on the show so far. Going to be hard to top.

Great entrance for Lynch. A Marvel Comic style video preview and then she comes out in a luxury SUV to the entrance ramp.

Belair wasn't about to be outdone as she got played to the ring by the Texas Southern Marching Band.

Great debut for Paul. He looked like a natural in there by performing a triple suplex, a nip up, a frog splash from the top rope to name a few moves along with his natural charisma.

Paul looked like he was about to lose when he got hit with double frog splashes. But The Miz had secretly tagged himself in and connected with The Skull Crushing Finale for the win.

After celebrating together, The Miz turned on Paul and his finisher on the social media influencer.

facebook twitter whatsapp
Right now at WrestleMania 38, Logan Paul and The Miz take on Rey and Dominik Mysterio in a tag team affair.

Paul is making his WWE debut. I am very intrigued to see how he performs.

Corbin nailed The End of Days for the apparent win, but McIntyre kicked out of the move, which is the first a wrestler has kicked out of Corbin's finishing maneuver.

McIntyre rebounded with a Futureshock DDT, followed by a Claymore kick for the pinfall victory.

I wasn't expecting anything good, and McIntyre and Corbin put on a banger.

After the match, McIntyre wasn't done as he used his sword to cut down the ropes in a cool spot.

Not the match people were expecting for the former two-time WWE champion, but at least McIntyre is on the show.

The Usos retain the gold

The complexion of the match changed when Boogs hurt his knee as Nakamura had to battle alone.

Nakamura had a bit of offense, but the two-on-one disadvantage played to the champion's advantage as they connected on a 1D to retain the belts.

Not the match you are accustomed to seeing to begin a WrestleMania. I don't get why a title switch wasn't made here, as The Usos act is getting a tad stale.

An interesting choice to start WrestleMania 38. Let's see if all four men deliver.

facebook twitter whatsapp
"The Problem Child" just appeared on the WrestleMania 38 kickoff show and teased he'd get involved in his brother's Logan's match as he teams with The Miz to take on Rey and Dominik Mysterio.

"I'm getting in the ring. If anyone boos my brother, I'm taking them out," Paul boldly stated.

"I'M GETTING IN THE RING!"@jakepaul joined the #WrestleMania Kickoff panel and made quite the scene... 😳 pic.twitter.com/50coG6CcZI

Will he make an appearance? Follow along, and we will let you know if he does.

facebook twitter whatsapp
Welcome to DAZN News' live coverage of night one of WrestleMania 38. The card is highlighted by Ronda Rousey meeting Charlotte Flair for the SmackDown Women's title and the return of "Stone Cold" Steve Austin appearing on the Kevin Owens.

The time is here, so stay locked in and follow along for what should be an exciting night.