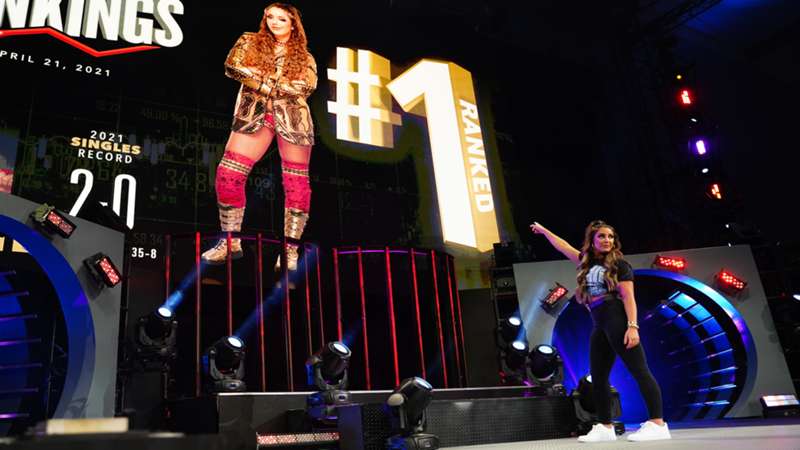 Britt Baker has the chance to prove how great she is at AEW's next pay-per-view offering.

A lot of expectations were put on Dr. Britt Baker D.M.D. when All Elite Wrestling was formed as she was the first woman signed to the company. Instantly, wrestling thought she would be shot to the moon and be the AEW Women's champion. Things didn't go that way and it had been a struggle for the real-life dentist to get to the top of the heap.

At the beginning of 2020, Baker's character evolved and she's been off to the races since. She has become the marquee name of the women's division but also one of, if not the biggest name in AEW.

The culmination of Baker's hard work could pay off on Sunday at AEW's latest pay-per-view offering, Double or Nothing, when she challenges Hikaru Shida for the AEW Women's title.

Ahead of the showdown, Baker sits down with DAZN News to talk about her evolution in AEW, her breakthrough moment, and what it would mean to become the champion.

It's enough. Enough is enough. It's not a joke anymore. It's ridiculous. I'm becoming the face of AEW and not just in the women's division. Stop the production on the 12th Cody (Rhodes) figure. We don't need it anymore. Let's take a stop on that and fire up the machines and let's start printing some D.M.Ds.

DAZN: You being the face of AEW gained a lot of steam after the match with Thunder Rosa. When you came in, you had a ton of hype. People felt you would be the face of the women's division. It took a little longer than I feel like people were expecting. Do you feel right now you're at that point where you're on the right path, or do you think there's still some ways to go?

BB: I think that I've done a fantastic job of making myself undeniable. I think when I'm on TV, you have to watch me. You can't look away. Whether I'm talking, if I'm wrestling, no matter what I'm doing, I have made myself a talent that you have to see, and you have to watch. To me, that's success in professional wrestling and sports entertainment.

DAZN: How did it feel to have blood gushing down all over your face during and after the match?

The bad news is... you forgot to kill me. Face of the women’s division. #AEWDynamite pic.twitter.com/5EYffwo4Iw

BB: When I first broke my nose about a year ago, we had quite a bit of blood with that too. It was tasting. I could taste my blood in a wrestling match, something I never really had before. That was different. But at the same time, it made me switch gears to a level I didn't know I had. Then with the lights out match, the blood was in my eyes. If you ever had blood in your eyes, it forms a red fog to where you can't see. You can make out figures that you can't see. It's honestly like a red contact over your eyes, and it's a fog. But it's like that feeling of, 'Oh my god, I can't see right now because my own blood is clouding my vision'. It was the same thing with the Shida match where I broke my nose. It made me feel a level of intensity and competitiveness that I never felt before.

DAZN: What was a more significant game-changing moment for you in your mind? Was it that match with Thunder Rosa, or was it turning heel?

DAZN: I talked to Adam (Baker's boyfriend) before his match with Kyle O'Reilly, and I asked him who is the better heel in the Adam Cole-Britt Baker household? Is it Britt Baker, or is it Adam Cole?

DAZN: He gave me the same answer.

BB: I'm far more competitive than he is. He's a good person and an old soul. I'm not saying I'm a bad person, but I have a competitive streak like no one else.

DAZN: In terms of being a heel, how much did you learn from him to craft your style to get to where you're at right now?

BB: In terms of being a heel, not at all because we're totally different heels. We are totally different characters. He helped me early on with a lot of ring psychology and the technical side of TV wrestling. But no one can really help you with being a glorified version of yourself. As much as he has helped me, this heel character is all me. He really didn't have a lot of input with this.

DAZN: It has been a long journey for you to get here. It seems like everything's clicking. You're one of the top women's wrestlers in the world, one of the faces of AEW. What would it mean to you to finally get to the top of the mountain on Sunday and win the women's title?

BB: Its validation is all it is because I've talked all the s— in the book, and I feel I back it up. That's controversial. Some people can say no, I'm not the best, and I just have a big mouth. But if I have a championship title belt around my waist, arguments over. I'm the best of the best. I can say it. I can show it. It's done.

DAZN: Does it bother you that people say that you're not the best and not one of the faces of AEW because you're a woman?

BB: I don't really care if I'm being honest. The fans, we need them. We need them to survive. They're the heartbeat of professional wrestling. But their logic sometimes is very faulty and flawed. I just got off a podcast with Bully Ray (WWE Hall of Fame wrestler), who says I'm the face of AEW, and I take his opinion way more than I do from Joe Schmo in the second row in Chicago. We're professionals here. You and I have a professional conversation. I don't care what anybody says. I know I'm the face of AEW. I don't care about any men that are involved in this topic. Right now, it's me. It might not always be me. It sure wasn't me before. But right now, the face of AEW has D.M.D. after her name.