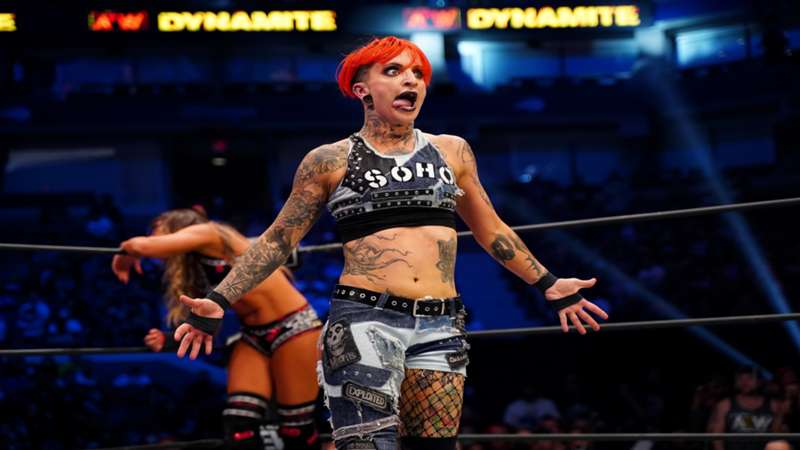 Ruby Soho has made quite the impact in her short time in All Elite Wrestling.

Ruby Soho had been treading water during her final months in WWE.

Things proverbally hit the fan when she was released by WWE in June. Soho didn't do much media and worked on rehabbing her new home while she was on her 90-day non-compete clause.

.@realrubysoho makes her #AEWDynamite debut against @jmehytr next - tune in NOW to watch #AEWDynamite LIVE on @tntdrama pic.twitter.com/lj8QHfIabO

Then at All Out in the beginning of September, Soho made her AEW debut in the Women's Casino Battle Royale as the Joker. She ended up emerging victorious and earning at a shot at Women's champion Britt Baker.

On Sept. 22, Soho and Baker main evented AEW Dynamite Grand Slam from the soldout Arthur Ashe Stadium in New York.  In a riveting back-and-forth matchup, Baker found a way to win to retain her title.

Ahead of match on Friday's live edition of Rampage against The Bunny, Soho talked with DAZN News about her time in AEW thus far, the match with Baker and the wrestling organization adding another singles women's belt in the near future.

DAZN: I'm in Las Vegas for the Tyson Fury-Deontay Wilder fight, and you said something about the last time you were in Las Vegas was when you were 21 years old. Now, what happened on your 21st birthday in Las Vegas?

Ruby Soho: I may regret mentioning that at some point, but I've only been to Las Vegas once for fun as I've been there a couple of times for work (in WWE). The first time I ever went to Vegas, the first time I ever experienced Vegas, my brother took me for my 21st birthday. It was wild. We found our way around different parts of the strip, and we wandered upon a Nelly concert. I think he was like paired up with a DJ or something that my brother had somehow found. He manages to find things all over the place. We found this concert, and we ended up right next to the stage where he was at. He asked for a couple of people to come on stage, and my brother holds up my ID and goes, ‘It's her birthday, it's her birthday’. He grabs my ID, and he's like, ‘Oh, damn, come on up here’. So he had me come up, and he sang to me for my 21st birthday. I'm freaking out. I'm just trying to look cool and move my hair all around. I looked like a mess. It was a wild time.

DAZN: We talked in the media scrum after you debuted in September at All Out and the reaction from that, and then you had that great match with Britt (Baker, AEW Women’s Champion). How would you characterize this first month so far in AEW?

RS: It's been a whirlwind. It's been a dream. Honestly, I didn't think I could love pro wrestling any more than I already did until I came here. It's just really honestly been like a dream come true. This place is what professional wrestlers dream of. This is something that I thought would exist, but not necessarily in my lifetime and my career span. So I'm so lucky and fortunate. I'm just so grateful every day I get to come to work. I love the environment. I love my boss. I love the crowd, the fans. I love every part of it and to be able to see everything play out, not even just stuff that I'm involved in but other things. To be able to be a fan and be able to do it at the same time is great.

DAZN: Because it exceeded your expectations, or is it gone just like you said just about how you expected it?

RS: Completely exceeded it. I was the type of person that first when I heard of AEW, a lot of my friends worked there. And I had heard all kinds of things about this place. I have a tendency, particularly for wrestling, to try and just be like, there's no way it can be that good. This sounds a little too good to be true. Like there's no way it's that good. It is leaps and bounds and even better than I thought. The ability that I have to just be myself and to do even more self-discovery of who I am, who my character is. How much fun that I can have is, is just an everyday learning experience for me. I'm with new opponents, a new crowd in a new environment, and it's just reignited this love I have for wrestling and performing.

DAZN: We’re talking about the match earlier with Britt, and I remember when you walked out, and you just looked around, you did like this quick little glance at the crowd. I could tell in your mind you wanted to say, ‘Holy s—,’ walking down to the ring. You were gleaming, and you had a smile that spread across the Arthur Ashe Stadium. That match felt like a proving ground match for you because we hadn't seen you in that big, long match that everyone's been wanting you in for a long time, and you got close to the show on Dynamite. What did that whole moment mean to you?

RS: Honestly, it was humbling to me. First of all, based on the card that was a part of AEW Dynamite Grand Slam and being the main event was super humbling. Kenny Omega and Bryan Danielson were on the show, and somehow we were the main. I loved it. I was super humbled and also humbled enough that this company trusted me. I'd only been here for three weeks by that point, and they trusted me enough to be in that position and to be able to deliver. That is super humbling to me. The response of the fans in a venue we had never been to before was super humbling. I feel like every time I go out there, I'm just super overwhelmed. The one thing that I think a lot of people have reached out to me and told me like I can see it on your face that you're happy. It's because I can't hide it. I'm not very good at hiding my emotions as it is. I can't hide it. The moment I go out there, I can't hide how happy I am.

I think it's funny to my entrance; it's interesting—my entrance at first. I've always tried when I was in WWE, I always tried just to do the cool entrance, the cool guy entrance. So if you see the first couple times I'd go out to the ring, I'd always try to be the cool guy. Bryan Danielson was like, ‘Hey, do you jam out to that song?’ I'm like, ‘Oh my gosh, all the time’. He was like, ‘Why don't you?’ I was like, ‘I gotta try it.’ He was like, ‘No, no, they want to party with you. Go party with them.’ I was like, okay. So ever since then, I've jammed the whole way down as much as I can because he was absolutely right. I had that in my head to be the cool guy. My entrance music is by Rancid. Why not just party with everybody there? It's little things like that learning experiences, learning how to let go of a lot of things that I've stuck with it for a while. It has been pretty awesome, really cool to learn and be able to let loose.

DAZN: AEW announced last week that the TBS championship will be coming when Dynamite goes to TBS at the beginning of January. We saw the promos with you, Thunder Rosa, and Sky Blue. What do you think of AEW adding another women's singles title?

RS: I think it's amazing. I think it opens up so many opportunities not only for myself but for the other women in the locker room. I think it's something unique to us that nobody else has. I think that's part of the thing that we always love about AEW that its different things and it's a different kind of product that you're going to see only here. One of the things that I love about it is it just opens up opportunities for myself and the other women in the locker room. I think that whatever comes of this tournament, I'm going to fight tooth and nail to try and be able to make history. I just got here. I've gotten a chance to be a part of that main event which was definitely history in the making, but I feel like there's so much more that I want to do.