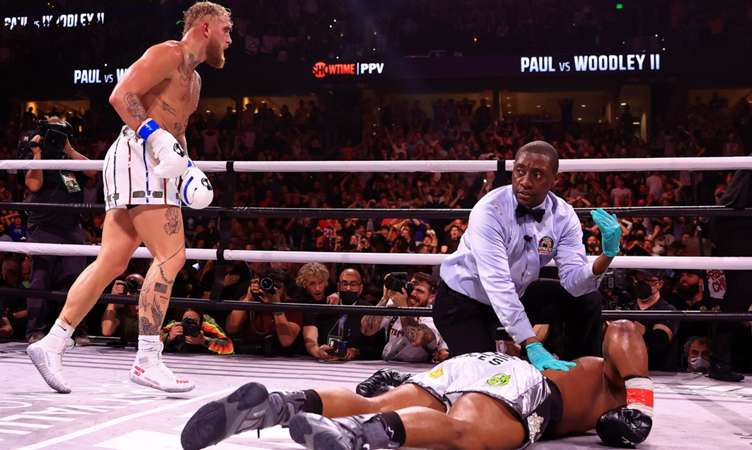 Jake Paul put an exclamation point to the rivalry with Tyron Woodley.

TAMPA, Fla. — At Friday's weigh-in, Jake Paul vowed to 'f— up' Tyron Woodley and knock him out in Saturday's rematch. Instead, most of the fight was lackluster, and the crowd inside Amalie Arena was booing Paul and Woodley for their lack of action.

But in boxing, anything can change in the blink of an eye, and that happened when Paul landed a thudding picture-perfect right hook to knock Woodley out cold and face-planted the former UFC welterweight champion to the canvas at the 2:12 mark of the sixth round. DAZN News had the fight scored 48-47 for Woodley at the time of the stoppage.

"This is as real as it f—ing gets just like my right hand," Paul told Ariel Helwani.

He scores the KO win in the 6th round to stay unbeaten 💥 #PaulWoodley pic.twitter.com/kxr4rG0SNB

Overall, the fight wasn't anything to brag about. There were many clinches, sloppy punches, and a takedown, much to the dismay of the mostly younger crowd, as they were looking for the knockout.

Heading into the sixth round, it was anyone's fight. Paul and Woodley made their way to the middle of the ring. That's when Woodley dropped his left arm, which was the opening Paul needed. The 24-year-old turned his hips ever so slightly and unloaded a detonating right hook to send Woodley out cold.

Paul (5-0, 4 KOs) gave Woodley his props for the two fights and called him a legend. However, "The Problem Child" quickly shifted his focus to two high-profile UFC stars who were in attendance and said he'd take on anyone at any time.

"It’s got to be the greatest year of my life," Paul said. "Look what I did, unprecedented. One of the most valuable boxers in the sport, four fights, four massive pay-per-views in 13 months. I’ve knocked out every single person I’ve fought. And (Jorge) Masvidal and Nate Diaz, you’re some b—es for leaving this arena. I know you don’t want this s—. I’ll take on both of y’all next. Just get out of your contract with daddy Dana (White, UFC President). Imma f— them up too."

"And @GamebredFighter & @NateDiaz209 y'all are some bitches for leaving this arena because I know you don't want that shit." @jakepaul calls out Jorge Masvidal and Nate Diaz 😳 #PaulWoodley pic.twitter.com/XjlgV19loL

Here is what happened at Jake Paul vs. Tyron Woodley 2.
0
NEW BLOG POSTS

Paul def. Woodley by knockout at 2:12  of the sixth round.

Paul and Woodley were standing in the center of the ring. Paul seen Woodley drop his left arm and he turned his hips and uncorked an unbelievable right hook to faceplant Woodley straight to the canvas.

He scores the KO win in the 6th round to stay unbeaten 💥#PaulWoodley pic.twitter.com/kxr4rG0SNB

Paul began the sixth with two jabs and a combination. Fight was getting very sloppy at this point with too much clinching and the referee isn't curtailing it. Woodley blasts a right uppercut down the middle. Moments later, the end came.

All you can say is HOLY COW!!

facebook twitter whatsapp
Both guys miss overhand rights to start the fifth. Left jab by Paul. Right to the body from Paul. Been making it a point of emphasis to attack Woodley there. Lot of clinching and the crowd isn't a fan of it. Left to the body and Woodley grabs. The referee has to gain a little control here. Combo from Woodley. That was enough to win the round in my eyes. (10-9 Woodley, 48-47 Woodley)

facebook twitter whatsapp
Wild left misses from Paul. Body shot lands for Woodley. Combo for Paul finished by an uppercut to the body. They were in the clinch and Woodley throws him to the ground. Referee warns the former UFC star. Woodley breathing heavy. Straight left connects for the YouTube star. Overhand right barely misses for Paul. (10-9 Paul, 38-38)

facebook twitter whatsapp
Woodley lunges and misses a left to begin the third. Paul with a lazy jab and Woodley cracks him with a straight right. Another hard right for Woodley. Hard right to the body by Paul. Paul is bleeding at the top of the head from a clash of heads. Right is blocked by Paul.

facebook twitter whatsapp
Woodley coming right out establishing the jab. Loud 'F— Jake Paul' chants. Paul rushing in and they hold for the second time. Crowd already getting restless. Paul pawing at the jab. Very hard round to score. (Woodley 10-9)

Jake Paul making his way to the ring

facebook twitter whatsapp
The former UFC welterweight champion is making the walk to the ring and is greeted with boos.

Time for Paul vs. Woodley 2

facebook twitter whatsapp
It's time for the main event as Jake Paul (4-0, 3 KOs) battles Tyron Woodley (0-1) for the second time. The time for talking is done. Here we go.

facebook twitter whatsapp
Paul is shown on the jumbotron and receives a healthy dose of boos. The main event will be happening shortly.

Fantastic performance by Serrano. She battered Gonzalez's insides to the point where I'm surprised her intestines didn't come out of her and made mince meat of her face.

It's now time for Katie Taylor-Amanda Serrano in the biggest women's fight that can be made.

No mention in Serrano's post-fight interview of Katie Taylor. We know why but alas.

facebook twitter whatsapp
We are halfway through this ten-round affair and Serrano has things well in control. Let's see if she turns the pressure up again and try to put the overmatched Gutierrez away.

facebook twitter whatsapp
Serrano tried her hardest to get Gutierrez out there in round one. A left sent Gonzalez into the corner and Serrano landed a barrage of shots but Gutierrez survived. To Gutierrez's credit, she connected on a couple of rights of her own. Did Gutierrez weather the storm?

facebook twitter whatsapp
It's time for the co-main event of Paul vs. Woodley 2 as Amanda Serrano (41-1-1, 30 KOs) takes on Miriam Gutierrez (14-1, 5 KOs) in women's lightweight action.

Big reaction for Serrano. A win by Serrano likely sets up the megafight with Katie Taylor in early 2022.

Nate Diaz vs. Dustin Poirier anyone?

facebook twitter whatsapp
As he was getting mobbed by his fans, I asked Nate Diaz if he was going to fight Dustin Poirier. It's a fight Diaz and Poirier have discussed on Twitter this week for 2022.

As he was getting mobbed by his fans, I asked @NateDiaz209 if he was going to fight @DustinPoirier. #PaulWoodley2 #boxing #ufc pic.twitter.com/NKaHb691oP

Beyond the mornic judge who scored that for Gore, Williams won pretty handily. He landed the crisper shots, scored the fights lone knockdown.

Williams said in his post-fight interview this is a one-and-done and is going back to his couch. Gore is leaving the door open to a return.

The fight was more fun than it had any right being. Williams and Gore left it all out there. Better than some pro fights. Respect to both Deron Williams and Frank Gore.

Gore technically is down

facebook twitter whatsapp
Two right hands by Williams at the beginning of the third and Gore's glove touched the canvas which is considered a knockdown.

Chaos in round two

facebook twitter whatsapp
Seen a bit of everything in the second round. Williams landed a nice three-punch combo and ended with pushing Gore nearly through the ropes. Gore made it up and the ringside doctor came onto the apron. Gore said he was ok. Gore landed a hard right hand and retaliated on Williams and shoved him through the ropes. Williams and Gore slugged it out to the bell. Williams is going to punish Gore some more in the third.

Williams and Gore slugging it out

facebook twitter whatsapp
Deron Williams and Frank Gore slugging it out in the first round. Both have a little bit of skill in there. Williams connected on the hardest shot of the round with a right hand. Good action.

facebook twitter whatsapp
Up next at Paul vs. Woodley is former three-time NBA All-Star Deron Williams (0-0) meeting the third all-time rusher in NFL history, Frank Gore in a four-round heavyweight exhibition. It was changed to an exhibition late Friday. No reason has still been given to the change.

Thunderous ovation for Gore and loud boos for Williams.