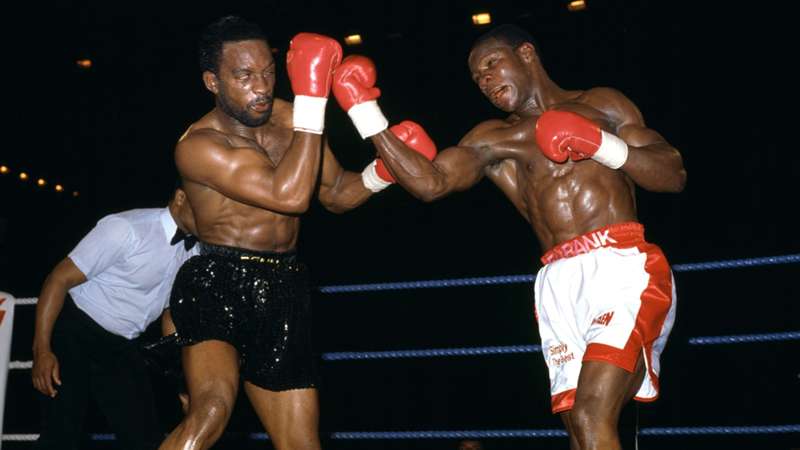 Eubank-Benn 1, back in 1990, was as historically and culturally significant as it was electrifying and unforgettable.

They were heady times, when big fights were watched by anywhere between a quarter and a third of the entire UK population and when most of the drama was relayed on freely-available terrestrial TV.

As the 1980s drifted away, Chris Eubank and Nigel Benn engaged in natural, unforced enmity which evolved and then erupted against the backdrop of shifting times in boxing and sport in general.

On the world scene, the Four Kings (Duran, Hagler, Hearns and Leonard) had completed their series of nine fights and Mike Tyson’s reign as the world heavyweight champion had ended in February 1990, beaten by Buster Douglas in one of the greatest ever shocks.

In the UK, Barry McGuigan was adapting to retirement and Frank Bruno had made two failed attempts to win the world heavyweight crown. There was room for a rivalry and the emergence of Benn and Eubank was well-timed.

In an era when newspapers were yet to be challenged by websites and social media platforms, boxing often elbowed football off the back pages. Stadium disasters at Bradford, Heysel and Hillsborough had cast a pall over the “national game” and English clubs had been banned from European competition for five years from 1985.

When Benn and Eubank met for the first time in November 1990, the first Premier League match was still the best part of two years away and satellite TV in the UK was in its infancy.

In so many ways, Benn and Eubank capitalised on a perfect storm.

Benn had turned pro after winning the ABA national championship in 1986, representing West Ham ABC. I was coaching at the Lynn club in south London at the time and we had at least one entrant in every stage of the championships and remember seeing Benn in communal dressing-rooms at various venues up and down the country.

Even then, there was an aura about him; the feeling that he might be different.

In the pro ranks, he suffered a shock defeat against Michael Watson in 1989 but it was a measure of his strength of character that, after such a crushing setback, he relocated to the US to revive his career and - between losing to Watson and meeting Eubank for the first time – he won five fights, became world champion and beat Hearns-conqueror Iran Barkley in one round. Benn was the man with the form in the book.

Eubank almost invited hostility, labelling the rivalry with Benn as a “society brain against a street brain”. In his book ‘Eubank’, published in 2003, he recounts how he listened to the BBC World Service to refine his accent. He was dismissed as a “fake toff” but his was a massively successful transformation.

He had gone to New York to live with his mother as a 17-year-old and had his first five pro fights in Atlantic City, New Jersey. When he returned to the UK, he signed a deal with Barry Hearn and their partnership would leave an indelible mark on British boxing.

Come fight night, 18 November 1990, I was sat six or seven rows back in the media seats, in my early days as a reporter, and have rarely been so blown away by the atmosphere at ringside.

It all happened on a Sunday, with the weigh-in on the day of the fight.  Both men were known to struggle in making the middleweight limit: Jim McDonnell, in camp with Eubank, said Eubank lost 17lbs in the last three days before stepping on the scales; word was that Benn had to shed anything up to half-a-stone on the morning of the fight.

What transpired was one of the great nights in British boxing.

Nine rounds in which both men held sway before the esteemed American referee Richard Steele stepped in to save Benn from his own bravery and tenacity. Steele would later describe the fight as the “most dramatic” he had ever refereed, some statement from the man who played the same role in ‘The War’ between Marvelous Marvin Hagler and Thomas Hearns in Las Vegas in 1985.

Of the three judges (all American), two had Benn in front by a round going into the ninth and the other scored it for Eubank by the same margin. It was one of the rare jewels, a big fight that lived up to the hype.

During the pandemic, ‘Boxing News’ magazine ran a feature listing the 50 greatest fights seen in a British ring and that amazing night at the NEC was ranked top of the pile.

We needn’t wonder why the battle of the sons has commanded such attention.

And you can watch the second generation of this iconic rivalry unfold this Saturday, live worldwide on DAZN. Fight fans in the United Kingdom, Ireland, Australia and New Zealand can order the event on DAZN PPV. For more information, click here. Fans elsewhere in the world can watch as part of their DAZN subscription. Click here to sign up.