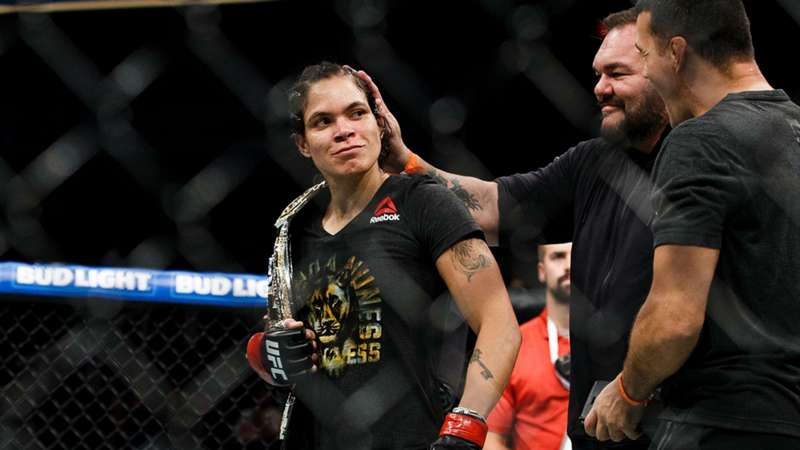 Here's everything you need to know in order to purchase the UFC 250 pay per view on Saturday, June 6.

The most dominant woman in mixed martial arts is back and looking to make history.

Amanda Nunes will defend the UFC women's featherweight title against Felicia Spencer in the main event of UFC 250 at the UFC APEX in Las Vegas on Saturday, June 6. If she wins, Nunes will become the first fighter in UFC history to successfully hold and defend world titles in two different divisions.

The fight will take place without live fans as the COVID-19 pandemic continues.

Nunes returns to the featherweight division for the first time since dethroning Cris Cyborg in violent fashion to become the champion back in December 2018. The 32-year-old is looking for her 11th consecutive win.

Spencer only has nine MMA fights to her name but has made a name for herself during her short career. She's 8-1, with her sole defeat coming at the hands of Cyborg. The Canadian is coming off of a first-round TKO of Zarah Fairn Dos Santos and will look to pull off the massive upset against the highly touted Nunes.

The main card will also feature a trio of bantamweight bouts and a welterweight bout headlined by Raphael Assuncao against Cody Garbrandt and Aljamain Sterling squaring off against Cory Sandhagen. Sean O'Malley will aim to keep his undefeated streak intact when he faces veteran Eddie Wineland to open the PPV.

Here's everything you need to know about how to watch UFC 250 on PPV.

UFC 250 takes place Saturday, June 6, with the pay-per-view portion beginning at 10 p.m. ET. Nunes and Spencer are expected to hit the Octagon around 12:15 a.m. ET, although the exact time depends on the length of the earlier fights.

In the United States, the UFC Fight Pass prelims, beginning at 6 p.m. ET, will be simulcast on UFC Fight Pass, ESPN, ESPN Deportes and ESPN+ in English and Spanish. The prelims will continue exclusively on ESPN and ESPN+ at 8 p.m. ET. The ESPN+ pay-per-view main card begins at 10 p.m. ET.

To see TV and live stream information for other countries, click here.