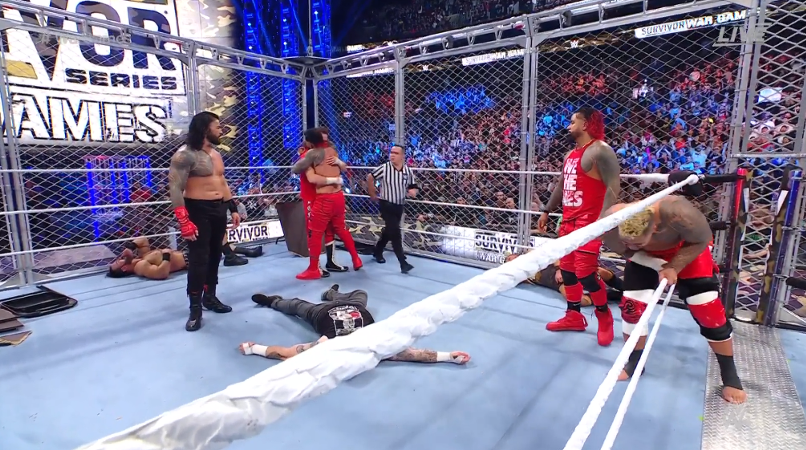 It was a different looking event this year.

A new-look Survivor Series thrilled the TD Garden in Boston on Saturday as The Bloodline claimed victory in a WarGames main event match against The Brawling Brutes, Drew McIntyre and Kevin Owens.

The pre-match talk focused on the issue of Sami Zayn's loyalty to The Bloodline, with Jimmy Uso, in particular, wary of the faction's lone unrelated member. Zayn was influential throughout the match, which was the first men's edition of WarGames to feature the main WWE roster, and his lengthy history with Owens proved to be a fulcrum as the Canadians were involved in the confrontation that led to The Bloodline's victory.

With Owens getting the upper hand on The Bloodline's leader Roman Reigns, Zayn intervened to stop a pinfall on "The Tribal Chief." Owens then engaged with Zayn, who proved his loyalty to Reigns and The Bloodline by helping incapacitate his longtime friend. Zayn then motioned for Uso, who had inadvertently superkicked Zayn earlier in the match, to hit a splash on Owen from the turnbuckle and get the pinfall.

With the Brutes defeated, the rest of The Bloodline welcomed Zayn into the faction with an embrace.

Earlier in the night, the women's WarGames match saw the team led by Bianca Belair claim victory. Belair had enlisted Becky Lynch, Asuka, Alexa Bliss and Mia Yim to her team, against a Damage CTRL-led team that included Nikki Cross and Rhea Ripley. Lynch, who was recruited to her team just a day previous, proved invaluable as she hit a leg drop on Ripley from the top of the cage, putting her opponent through a table in the process.

"The Man" then rolled Ripley up for the pin, giving Team Belair the win.

Aside from the WarGames matches, a pair of titles were put on the line Saturday as Ronda Rousey easily defeated Shotzi to retain the SmackDown Women's Championship, while Austin Theory became the youngest United States champion in WWE history when he earned a pinfall on Seth Rollins in a Triple Threat match that also included Bobby Lashley.

In addition, AJ Styles defeated Finn Balor in an entertaining contest between two of the best in-ring entertainers in WWE, with Styles finishing the match by hitting a Phenomenal Forearm on his opponent.

Owens and Reigns go 1 on 1 with everyone else sprawled across the two rings. Owens gets the upper hand and hits Reigns with a stunner, but as he's about to get the pinfall, Zayn grabs the referee's arm to stop the count. That leads to a confrontation between Owen and Zayn, with the latter eventually winning out with a low blow and a kick to the face.

Zayn signals to Jey Uso to hit the prone Owens with a splash from the top rope, allowing Jey to secure the pinfall.

Roman Reigns is in

Sheamus is the final Brute to enter

facebook twitter whatsapp
His entrance to the ring is blocked at the door by Zayn, at least temporarily. The Celtic Warrior eventually powers his way in, and it's a numerical advantage for the Brutes until Reigns is allowed in three minutes later.

Solo Sikoa into the match

facebook twitter whatsapp
Solo runs through every one of the Brutes until squaring up with Owens between the two rings.

Kevin Owens sprints to the ring

facebook twitter whatsapp
Like Jimmy Uso before him, Owens grabs several onbjects from under the ring before entering. His preference is steel chairs, which he uses on the Usos before confronting Zayn.

facebook twitter whatsapp
The second Uso grabs three tables before entering the ring. Jimmy then has to get between Zayn and Sami, who haven't been on the same page at all tonight.

Drew McIntyre strolls to the ring

Reigns tells Zayn to head to the ring as questions about his loyalty to the Bloodline persist.

It's even 2 v 2 between the teams now, but will Zayn prove himself?

Rollins looked like he had the match wrapped up after he hits Theory with a Superplex / Falcon Arrow combo, but he got hit by a spear from Lashley as he had Theory raised in the air. That allowed Theory to roll up for the pin, and the newest (and youngest ever) U.S. champion was crowned.

That was quite the match.

US Championship Triple-Threat match is up now

facebook twitter whatsapp
Shotzi put up a great effort, but Rousey's experience prevails and she gets Shotzi to tap out while locked in an armbar.

SmackDown Women's Championship is on the line

facebook twitter whatsapp
It was a battle featuring some decent spots from the two men, but Styles eventually gets the win with a phenomenal forearm from off the ropes leading to a pin.

Finn Balor vs. AJ Styles is about to start

Becky Lynch gets the pin!

facebook twitter whatsapp
Lynch hits a leg drop from the top of the cage, putting her opponent through a table in the process. "The Man" then rolls her up for the pin, and it's 1-2-3.

Team @BiancaBelairWWE wins inside #WarGames following a spectacular @BeckyLynchWWE leg drop off the top of the cage for the win!#SurvivorSeries pic.twitter.com/3HiGP3opha

Iyo Sky with a moonsault off the cage!

Becky Lynch is the last woman in

facebook twitter whatsapp
Mia storms in throwing all the extra weaponry around, as her team is laid out and in need of help.