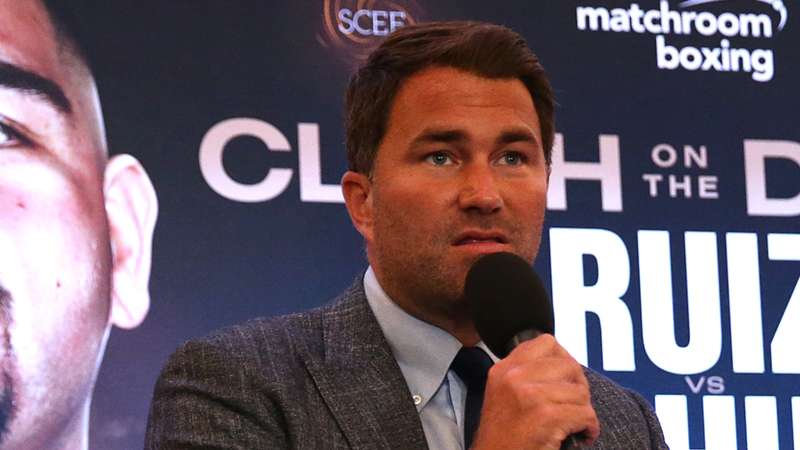 Matchroom promoter Eddie Hearn spoke openly about the sacrifices that were required to bring live boxing back in the face of the COVID-19 pandemic, and what the future holds for the Fight Camp concept.

Matchroom Boxing chief Eddie Hearn admitted on the day before the last of four Fight Camp cards that the unique concept has been a financial setback, but also a necessary one for the promotion to continue their momentum in the face of the COVID-19 pandemic.

With live crowds completely out of the question for almost six months, Hearn made the decision to stage four cards in as many weekends live from the spacious back garden of Matchroom's headquarters in Brentwood, Essex.

And moments before the weigh-ins for the biggest of the quartet — headlined by Dillian Whyte vs. Alexander Povetkin and Katie Taylor's rematch with Delfine Persoon — Hearn confessed some of the pros and cons to the coronavirus workaround in an interview with Sky's Head of Boxing Adam Smith.

"This whole experience has been wild," said Hearn.

"I was worried about this, because of all the egos that we’re bringing into the bubble, but everyone has really embraced it. Everyone is walking around here with smiles on their faces. Dillian Whyte and his team are in their winnebagos (RVs) playing Playstation.

"I can’t believe the success of this project. And to finish it with a show like this, with five fights like these — particularly the two huge fights on top — I’m really proud."

He continued: "This is a massive time for boxing. It’s the first time since boxing has returned that we’ve seen such big fights and a lot of people will be tuning in to witness.

"Financially, no gate for a card like this is a disaster. But we’ve worked so hard over the last 10 years that I wasn’t prepared to come back and not make a statement. This is our way of making a statement, and you do that by investing.

"In turn, some of the fighters are accepting less money. Some of them are taking on riskier fights. Dillian Whyte is one of them. Not only is he putting his number one contender’s spot on the line, he is also hoping that we perform well on pay-per-view (on Sky). And I really believe we will, looking at the earlier numbers.

"It’s no secret: We’ve lost the gate. We’ve lost the crowd. That’s a million pounds. So, how do we replace that? Hopefully, we replace it by doing great numbers and reducing costs, such as staging the fights here. And with us investing our money into this concept and fighters taking less money, we found a way to get it over the line."

Hearn insists that the effect this tumultuous calendar year has had so far on the boxers themselves has been encouraging, in terms of everyone's attitudes.

"In the first three weeks, which have all been fantastic, we didn’t have any particularly big names," explained Hearn. "Nobody who is particularly spoiled, no big demands such as the white sofas, special doves flying into the sky and only green Haribos on arrival. It was refreshing. But here we are at week four, and it’s actually been the same.

"I think the pandemic has made people realise that things have changed, and opportunities may end up few and far between. I think everyone, top to bottom, is more grateful to get out there and perform as a result.

"It also means the TV guys and the digital teams here with us can get more stories on what’s going on behind the scenes, so the fans are learning even more about these fighters doing battle."

After Saturday's megashow is done and dusted, the big question will be whether the Fight Camp concept has legs going forward, especially with Hearn confirming it being a loss leader.

"We’ve got Oleksandr Usyk vs. Derek Chisora to schedule, Anthony Joshua vs. Kubrat Pulev to schedule, and plenty of other big names to get back out there: Josh Warrington, Callum Smith, Billy-Joe Saunders, Kell Brook.

"It’s a really big moment for boxing, coming through the pandemic with nights like these. With no crowds, the challenge was seemingly insurmountable. And it’s important that we pick up on this momentum as we move forward to September, October and so on.

"There’s still lots of work to do. But this has been a great project and it’d be nice to get tomorrow night’s show done, have a beer and then on Monday we can get to work on what’s next."

Matchroom Fight Camp 4, headlined by Dillian Whyte vs. Alexander Povetkin and Katie Taylor vs. Delfine Persoon, airs live on Sky Sports Box Office and DAZN in the U.S. on Aug. 22.