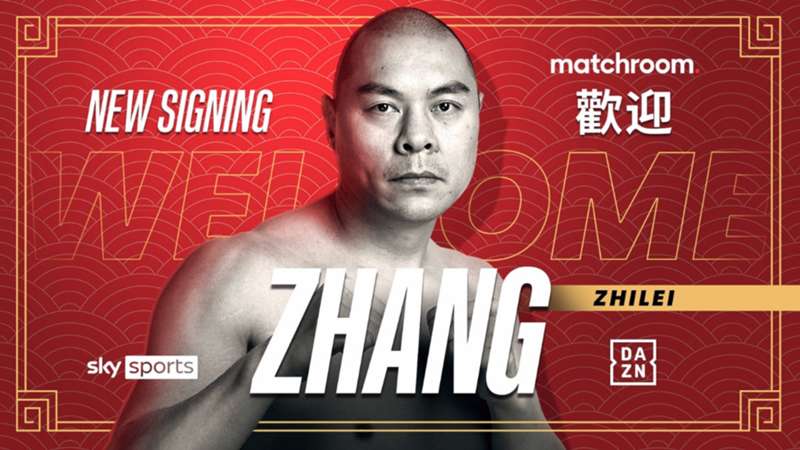 Zhang Zhilei (21-0, 16 KOs) has signed with Matchroom Boxing in a deal that sees Eddie Hearn’s firm become the sole promoter of the unbeaten Chinese heavyweight.

Zhang last saw action on Nov. 30 in Monte Carlo, Monaco, with a 10-round win over Andriy Rudenko to kick off his third reign as WBO Oriental champion at the maximum weight.

The 37-year-old sits at No. 11 with the WBO and No. 12 with the IBF, and is currently in New Jersey training for his return to the ring in November.

“I’m very happy to enter into an agreement with Matchroom,” said Zhang. “They are one of the best promoters in the world.

"I’m the best heavyweight coming out of China. I just need an opportunity to become the best in the world which I strongly believe that Matchroom is able to provide. With each of us focused on our part, I wish a happy and successful future together.”

With the heavyweight ranks coming to life in recent years after a long dry period, Hearn is confident "Big Bang" can make an impact.

“The heavyweight scene couldn’t be any hotter right now, so this is the perfect time for Zhang to get back into action and throw his name into the mix,” he explained.

"He is ready to take on all-comers and as he aims for his 22nd win in November, the next step for Zhang then will be to face his fellow top-class contenders and get in position for a world title shot.”

Zhang is now a stablemate of current WBA (Super), WBO and IBF heavyweight champion Anthony Joshua, who defeated Zhang 15-11 at the London 2012 Olympic Games on his way to gold.

On his home turf in Beijing in 2008, Zhang was able to secure a silver medal, losing in the super-heavyweight final to veteran amateur boxer Roberto Cammarelle of Italy.

“We are extremely excited about the partnership with Matchroom,” said Zhang’s advisor Terry Lane, from Lane Brothers Boxing. “He is a world-class heavyweight and Matchroom is one of the world’s premier boxing promoters. It’s a natural fit, and this puts him in the mix amongst boxing's top big men.”