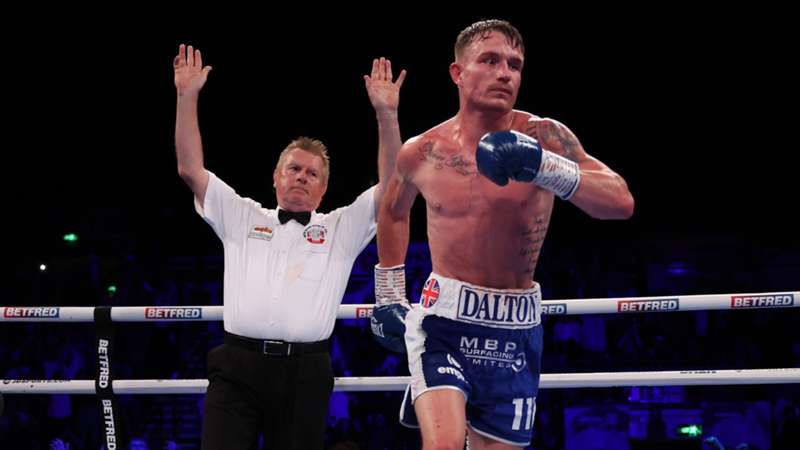 Dalton "Thunder" Smith put on a spectacle in his hometown of Sheffield, England, to defeat Sam O'maison on Saturday.

The 25-year-old was a picture of patience and calculation as he picked his spots against 31-year-old O'maison, earning a TKO in the sixth round with several well-timed combinations. O'maison, clearly weary of Smith's power advantage, was hesitant to open up against his younger opponent. Instead, his tentativeness worked against him as Smith was equally as patient but much more decisive when opportunities presented themselves.

"I prepared the best I could," O'maison said immediately after the fight. "But at the end of the day, Dalton’s a class fighter."

Smith knocked O'maison down in the third round and progressively made things worse for his compatriot as the fight wore on, with O'maison becoming increasingly bloodied towards the end of the bout. Things went from bad to worse in the sixth, and ultimately final, round as O'maison was knocked down twice quickly towards the end of the round to end the fight.

Smith improves to 12-0 with 10 KOs, leaving with the British super lightweight title. He's already looking towards the future, although there were no specifics given in the immediate aftermath of Saturday's title victory.

"Look, my main job was to win this [prestigious] belt. It's something I've always wanted to do," Smith said. "Whatever's put in front of me by my team and [Matchroom boss] Eddie [Hearn], that's who I'll fight. I'm not one for calling people out. I'm not one for badmouthing. I get in and fight whoever I need to fight."

Check out below for running commentary and highlights of the undercard and main event.

facebook twitter whatsapp
Less than a minute after knocking O'maison down for a second time in the match, Smith puts his older opponent down for a third and final time to end the fight.

The fifth round ends with O'maison somehow still on his feet after taking several big right hands from Smith.

It's a credit to O'maison that he's still in this, but it seems only a matter of time before Smith wins this one.

Fighters exchanging punches in the fourth

facebook twitter whatsapp
Smith's aggressiveness seems to have drawn O'maison into trying to land punches of his own. However, Smith has the power advantage and is landing the more brutal shots, which is having a cumulative effect on O'maison.

Smith gets the first knockdown

The "waiting each other out" phase seems to have ended in the third round, as Smith connects with several punches. The biggest was a left jab followed by a right hook that puts O'maison down.

To his credit, the older competitor popped back up and went on the front foot himself towards the end of the round.

A cagey first round in Smith vs. O'maison

Sweet Caroline is on the loudspeakers

The main event is up next

facebook twitter whatsapp
It's a local derby as the two Sheffield headliners face off in a few moments.

It's a unanimous decision for Ryan, who looked relatively untroubled throughout the ten rounds.

"It's a weight lifted off my shoulder," Ryan says after winning the rematch against Farias, leaving with a belt on her waist.

A second-round knockout ends this one early.

Reissinger protested the decision by the referee to end the match with him down, but it didn't matter.

Thompson is a very lucky man as he switched off in the final 30 seconds of the 10-round fight, and Ducar hit him with several hard shots to knock him down. However, he still wins based on how easily he seemed to cruise through the prior rounds.

Jordan Thompson gets saved by the bell in the final round 😳#SmithOMaison pic.twitter.com/pEw1zHetdS

"The last 30 seconds actually did me better than the first nine-and-a-half rounds," Thompson tells the broadcast after the fight.

Hatton takes the 60-54 decision here after a dominant display against Dufek.

An entertaining opening fight as the youngster came out flying in the first round but was taken the full six rounds by the 39-year-old Czech.

Broadcast has begun on DAZN