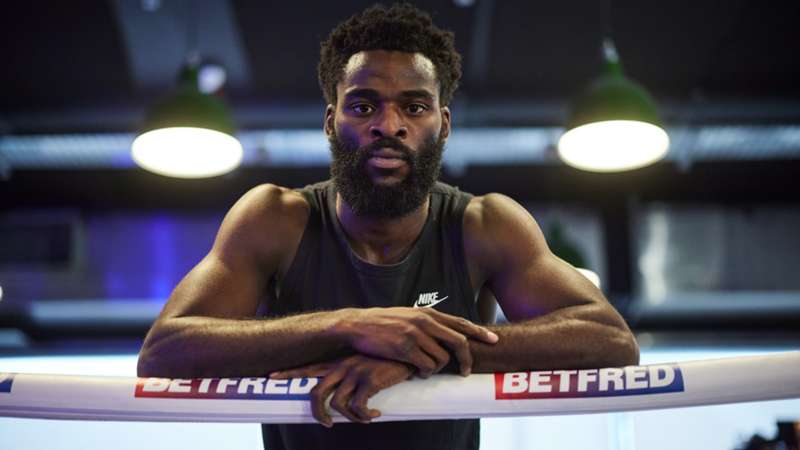 Exclusive: Joshua Buatsi believes the pressure he puts on himself surpasses any from outsiders.

A bronze medal at the Olympics, signing to Anthony Joshua’s 258 management and being touted as a future world champion, Britain’s Joshua Buatsi is slowly becoming one of the ‘poster boys’ of British boxing.

But while there is a lot of support behind him, some fans still remain to be convinced by Buatsi and whether he can capture some of the sport’s biggest prizes.

With a 15-0 record, he is being slowly built up to perform on the world stage, but Saturday night's fight against domestic rival Craig Richards live on DAZN (except Australia and New Zealand) will have a huge bearing on whether a successful world title challenge is feasible.

Richards, a former world title challenger, has already proven he has the ability to mix it up with the leading talents at 175lbs following his strong performance against WBA champion Dmitry Bivol this time last year, but Buatsi is still lacking that ‘star’ name on his record for some of those inside and outside the sport to take him seriously.

Buatsi and Richards have previous history. The pair met as amateurs in 2014 in a fight which Buatsi won, and now the pair meet again as professionals in what is being dubbed as ‘The Battle of South London’.

When speaking exclusively to DAZN from his camp in America, Buatsi acknowledges the tension is higher, but he is not letting that distract him from his preparations ahead of the O2 Arena main event.

“Whether it’s Richards or anyone else, I think the main thing here is that it seems like a derby,” Buatsi said.

“If two London teams are playing each other, it’s going to be a great match.

“It does add a bit of spice to it, but again it’s just what it is, I’m not looking too much into stuff like that.”

“My preparation has been as good as it can be, that’s the most important thing.”

Throughout his career in the professional and amateur ranks, Buatsi has made a number of changes to develop his ability, most notably a decision to move to the US last year to train with Virgil Hunter, who was the mastermind behind Andre Ward’s stellar career.

“For me, 100%,” Buatsi responded when asked about whether making the move to Hunter’s California gym was made at the right time.

“We might say actually ‘no’ - the time difference stops you from getting media attention compared to the same time zone as the country you live in, which can be argued, but in terms of boxing ability and what I’m learning, and the skills I’m learning to help me in the profession I am in, 100% it’s been a good move.”

Big names often visit Hunter’s gym, none more so than former two weight world champion Andre Ward, and while Buatsi has spoken to him in the past, it’s not something he banks on when training.

“This camp I haven’t seen him.

“A few camps I do see him, but I haven’t seen him.

“It’s good that if someone that’s been there and done it can pop down to give advice, but as we know boxing is a walk that you have to walk on your own.

“I didn’t come here sat in one spot and hope Ward comes in the gym, there’s so much work to do.

“If he comes, great, if he doesn’t, great, work carries on.”

With an Olympic bronze medal to his name, it would be assumed that Buatsi would be carrying a lot of pressure going into any fight he participates him, but instead of worrying about any expectation from fans, the only person Buatsi is interested in satisfying is himself.

“The pressure I put myself surpasses what the outsiders put on me,” Buatsi stated.

“If there’s pressure, the one I put on myself is superior to any other pressure anyone puts on.

“We can talk about this experience, that experience, look: May 21st whatever experience you got, bring it, show it, and I’ll do the same.

“There’s no difference just because I went to the games or I boxed for GB, stuff like that is long and gone.”

Joshua Buatsi’s calm demeanour before this domestic showdown is nothing new, but come Saturday night against Craig Richards, expect a completely different animal who will be looking to silence those who question his ability and cement his place as Britain’s top contender at light-heavyweight.